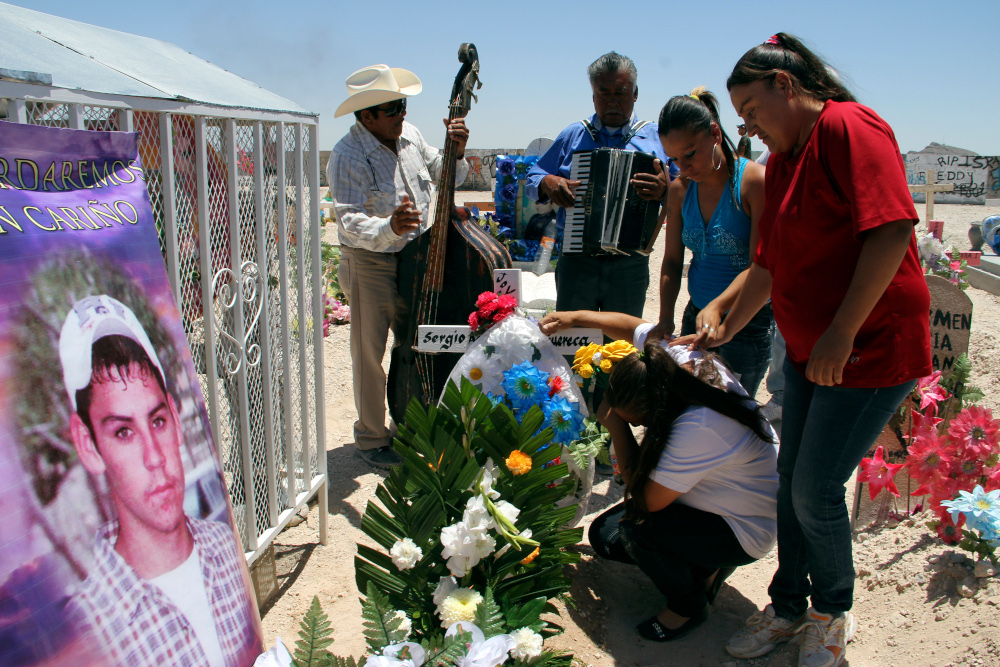 Norteno musicians play while relatives comfort Maria Guadalupe Guereca, kneeling, as she mourns at the grave of her teenage son, Sergio Adrian Hernandez Guereca, in a cemetery in Ciudad Juarez, Mexico, June 7, 2012. In a 5-4 vote Feb. 25, 2020, the U.S. Supreme Court ruled that a U.S. Border Patrol agent could not be sued for the 2010 shooting death of the teenager on the Mexican side of the border. (CNS/ Reuters/Jose Luis Gonzalez)

In a 5-4 vote Feb. 25, the U.S. Supreme Court ruled that a U.S. Border Patrol agent could not be sued for the 2010 shooting death of a Mexican teenager on the Mexican side of the border.

The court upheld a lower court's dismissal of a lawsuit by the family of the teen, Sergio Adrian Hernandez Guereca, against the agent, Jesus Mesa. The family was seeking monetary damages for the teen's death and accused the border agent of violating the Constitution's ban on unjustified deadly force in the Fourth Amendment and right to due process in the Fifth Amendment.

Justice Samuel Alito, writing the majority opinion in the court's decision, said the case had "foreign relations and national security implications" and that courts should steer clear of lawsuits filed by foreign victims in U.S. courts without congressional authorization.

Justice Ruth Bader Ginsburg, writing the dissent, asked how "using excessive force to kill a child" was a matter of national security. She also described the agent as a "rogue officer" and said he used lethal force on someone who posed "no immediate threat to the officers" or others, which she said was a "classic definition of an unreasonable use of force."

If this family's case seems familiar, it's because the Supreme Court also heard oral arguments about the same case in 2017. At that time, the court issued an unsigned opinion saying the agent was not entitled to immunity and the case was sent back to a federal appeals court, which again dismissed the case last March.

The case is about the shooting of Sergio, who was 15, in the concrete culvert of the dry riverbed of the Rio Grande, the river separating El Paso, Texas, from Ciudad Juarez, Mexico. Hernandez, according to reports, had joined friends in running across the culvert to touch the border and run back.

The Department of Justice concluded that Mesa, the Border Patrol agent, had not violated Customs and Border Protection policy or training by shooting the teen and it did not bring charges against him. The Obama administration at the time denied Mexico's request for Mesa to be extradited to face criminal charges in Mexico.

The site of the shooting is near the location where Pope Francis in 2016 blessed a large cross in memory of all the people who have crossed the border.

In 2010, the Archdiocese of Mexico City released a statement about the teen's death saying there was nothing that could justify his shooting. "This new act of violence once again confirms that anti-racial policies that violate the human rights of immigrants cannot result in anything good for society and for the world."

The archdiocese also said the shooting "led to increased tensions" and would make the border situation even worse. "The impunity of this killing will encourage similar acts of barbarism to be committed against Mexicans and immigrants," the statement said.

Dylan Corbett, executive director of the nonprofit group Hope Border Institute in El Paso, said his organization disagrees with the Supreme Court's decision in this case and believes the law is on the side of the teenager's family.

"Americans must know that the impact of decisions like this will only further a troubling culture in border enforcement agencies which flouts accountability and due process and puts migrant lives in danger," he told Catholic News Service in an email.

Rep. Joaquin Castro, D-Texas, chairman of the Congressional Hispanic Caucus, called the court's ruling "an assault on basic civil and human rights. The U.S. Supreme Court today has legalized murder without cause in cases where a U.S. Border Patrol agent shoots a Mexican national standing on the Mexican side of the border."

The court's decision prevents civil rights lawsuits in U.S. federal courts involving similar cross-border incidents if the person injured or killed was not on American soil. That means it is likely to put a stop to the lawsuit filed by the parents of Jose Antonio Elena Rodriguez, a 16-year-old Mexican teenager, who was fatally shot in Nogales, Mexico, in 2012 by a Border Patrol agent in Arizona.

Lee Gelernt, a lawyer for the American Civil Liberties Union, which represents the Rodriguez family, said the court's decision in the Hernandez case will have a big impact. "The gravity of this ruling could not be clearer given the Trump administration's militarized rhetoric and policies targeting people at the border," he said in a statement.

The lawsuit filed by the Rodriguez family has been on hold with the 9th Circuit Court of Appeals, awaiting the court's decision in the Hernandez case.

In the Rodriguez shooting, the agent, Lonnie Swartz, claimed to have fired in self-defense after he had been hit by rocks. Juries found him not guilty in two criminal trials.

In response to Swartz's 2018 acquittal, Bishop Edward J. Weisenburger of Tucson, Arizona, said he felt a bond of "fraternity and solidarity" with the teen's family and "the many who have been unable to achieve the kind of authentic justice upon which our nation was founded."

The bishop also pointed to the difficult and dangerous situations that Border Patrol agents face, noting that "there are times when their efforts have resulted in saving the lives of those in great peril."

But in a statement, he called for "continued scrutiny of the methods and procedures employed by those who secure our nation's borders, for transparent accountability, for a renewed sense of dignity and the human treatment of all persons regardless of their legal status, and for authentic justice when human rights are denied."