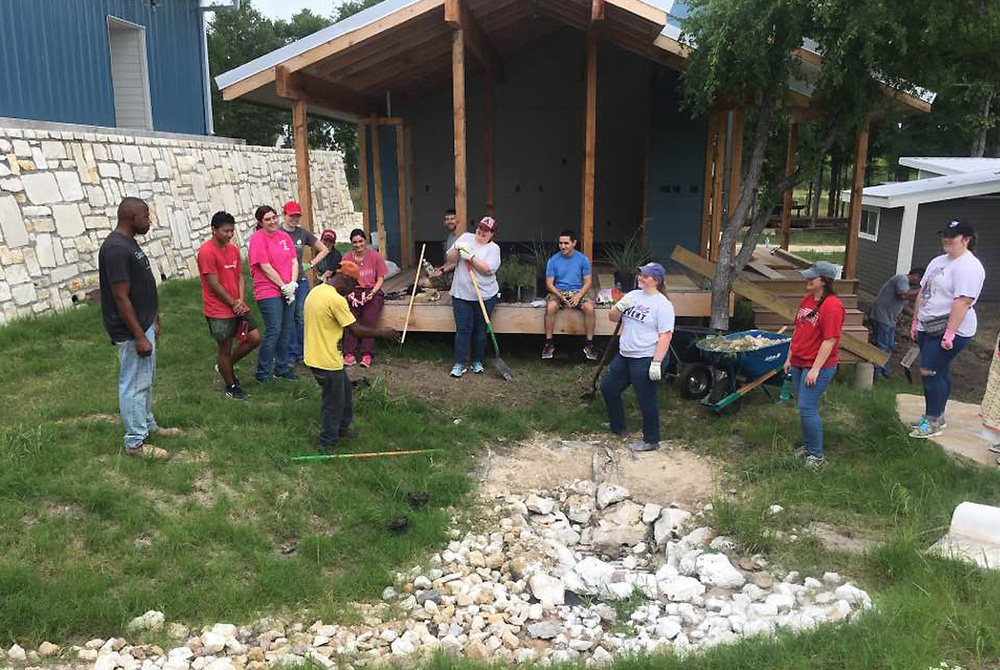 Students from Arkansas colleges help out May 16, 2017, at a community in Austin, Texas, that offers permanent residence to homeless people. The visit to Community First! Village came during a mission trip organized by the Diocese of Little Rock, Arkansas. A national study found a move toward "immersion" instead of service, although the report noted the importance of service as an entry point into campus ministry and for student transformation. (CNS/Arkansas Catholic/Courtesy of Catholic Campus Ministry of the Diocese of Little Rock)

A national survey has identified two major challenges facing college and university campus ministers: a desire to help young Catholics transition from college to parish life, and the need for better collaboration between professional campus ministers and those who work for "missionary" organizations.

The report said helping students transition into parishes "poses some formidable challenges," and that the "varying degrees of success" of mixing professional and missionary campus ministers provide important lessons for how to better integrate them or decide even if such a model would work for a particular school.

In response to the findings, released Jan. 24 by the United States Conference of Catholic Bishops, two groups will be formed to study each of these issues and make recommendations to church and educational leaders, said Barbara Humphrey McCrabb, assistant director for higher education for the U.S. bishops' Secretariat of Catholic Education.

A task force will address "shared ministry" between missionary and professional campus ministers, while a second group will examine creative ideas to build bridges between parishes and campus ministry, including for students who attend community colleges, McCrabb told NCR.

A previous study of U.S. campus ministry found that only one in 60 community colleges was served by Catholic campus ministry. The new study, which involved in-depth interviews with 45 campus ministers, was a follow-up to that 2017 study.

The new study confirmed that campus ministers see their work as a vocation and find joy in it, but they also struggle with long and erratic work hours, heavy administrative work and encounters with clericalism.

Both male and female campus ministers said they experienced clericalism when they were assigned more administrative work than their priest counterparts, left out of decision-making or passed over for advancement over newly ordained priests.

"If I had a collar, all doors would be open to me in ministry. I would be a voice at the table, no matter where I was sitting," one respondent told researchers. "As a layperson, I don't have that. I never will have that, even though, I will say, I have the credentials and the experience." 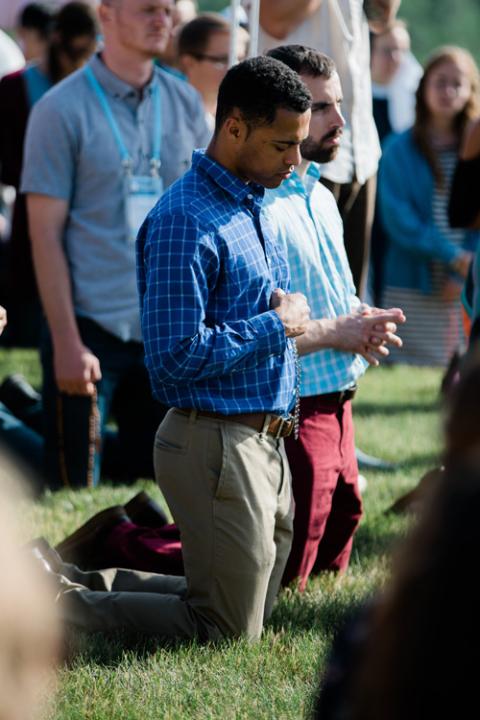 Franco Watts, a missionary with Fellowship of Catholic University Students, or FOCUS, prays with his rosary June 13, 2018, at the University of Mary in Bismarck, North Dakota. Curtis Martin, president and founder of FOCUS, says young people who stick to the church are the ones who have discovered their first love: Jesus. The reason so many young people are drifting away is because the church has "lost its voice," he said. (CNS/Grant Whitty, courtesy of FOCUS)

Some experienced campus ministers — termed "professional" or "degree-based" in the report because of their academic training and expectation of a long-term career in campus ministry—also reported tension with younger, less experienced missionary campus ministers who work for groups such as the Fellowship of Catholic University Students, or FOCUS, or St. Paul's Outreach, or SPO.

Although the report was unable to quantify the frequency of such conflicts, it described them as "serious difficulties" arising among groups with different visions of campus ministry.

Although some interviewees reported successful cooperation, some professional ministers felt "colonized" by missionaries, while some missionaries felt "undermined."

In some cases, professional ministers were told, without consultation, by their diocese that missionaries would be added to their team. "This can be very difficult for professional ministers, first, because they provide the primary pastoral care for the campus and appreciate consultation. And second, because some professionals believe that missionaries will undermine their pastoral work due to differences in theological orientations and pastoral practices," the report said.

"Likewise, missionaries sense when they are not wanted by the professional ministry team, and may simply default to the activities learned in their training, forming two parallel — rather than integrated — ministries," according to the report.

Some professional ministers were worried they would be replaced by the younger, less expensive missionaries — or be relegated to administrative work as the missionaries take on one-on-one outreach with students. Others were concerned about missionaries being "in over their heads" because of their lack of training or degree in ministry or a related field.

Missionaries contend that their main mission — to "disciple" students — does not require advanced training.

The report accepted the reality of the "blended" or "hybrid" model today, without weighing in on its effectiveness. It detailed four principles for effective collaboration: a shared vision, regular communication, an understanding of each group's roles and competencies, and the effective use of professional ministers' leadership.

"As the report shows, sometimes it was a really positive and flourishing experience as long as these four main needs were being met," lead researcher Maureen Day told NCR. "Sometimes it wasn't there and needed to be worked on."

Day is an assistant professor of religion and society at the Franciscan School of Theology in San Diego and a research fellow the Center for Applied Research in the Apostolate, or CARA. The other lead researcher was Linda Kawentel of the University of Notre Dame.

The report suggested that when bringing in missionaries, professional ministers "should be explicitly assured of their continued employment."

"Their long-term dedication and experience with the campus culture should be recognized as a valuable asset," the report said, noting that professional ministers can help form missionaries, perhaps even with a dedicated staff person as a liaison.

The report also noted that the introduction of missionaries "can't be forced."

"Coercion can force a new ministerial model, but only with an openness to a vision shared by all involved will it succeed," the report said.

The new task force on this issue will make recommendations for next fall, McCrabb said.

Some differences about how various types of campus ministers understand the importance of evangelization, a relationship with Jesus and service opportunities were clarified in the newly released survey.

For example, the earlier study found that 90% of missionary campus ministers believed evangelization was somewhat or very important for students' faith development, compared with only 62% of professional campus ministers.

But the second study revealed different impressions of the word "evangelization" — with some seeing it as "in-your-face," aggressive attempts at conversion, while others interpreted it as simply spreading the good news.

The interviews revealed more common ground than originally thought, with a shared belief that evangelization should be relational. "All ministers wanted to bring good news to their campus and they did so in ways that they believed made sense for their gifts and their contexts," the report said.

Again, the second survey found common ground about the importance of a relationship with Jesus, but that the different contexts shaped how different campus ministers facilitated that relationship.

Campus ministers in both settings adjust their approach, given their audiences, the study found.

"Being sensitive to the variety of faiths they are called to serve requires ministers at Catholic campuses to take a more generally theistic approach with their students at times," the report said.

At public campuses (which have a higher proportion of missionaries), Catholic campus ministers can mention Jesus more frequently, since they do not serve other faiths. The study also found that ministers on secular campuses—which may be indifferent or even hostile to religion—tend to use more combative language when discussing "the world," creating a sense of embattlement between Catholics and the campus.

Another discrepancy involved the value of service opportunities for students, with 79% of professional campus ministers finding it important, while only 56% of missionaries did, according to the first survey.

The follow-up interviews found a more overall shift toward relational ministry, both in a general move away from "programming" and in a shift from service to "immersion," which is more about "encounter" than charity.

The report called the encounter-versus-service distinction a "false binary," however, and emphasized that service opportunities are a frequent entry point into campus ministry as well as a vehicle for student transformation. 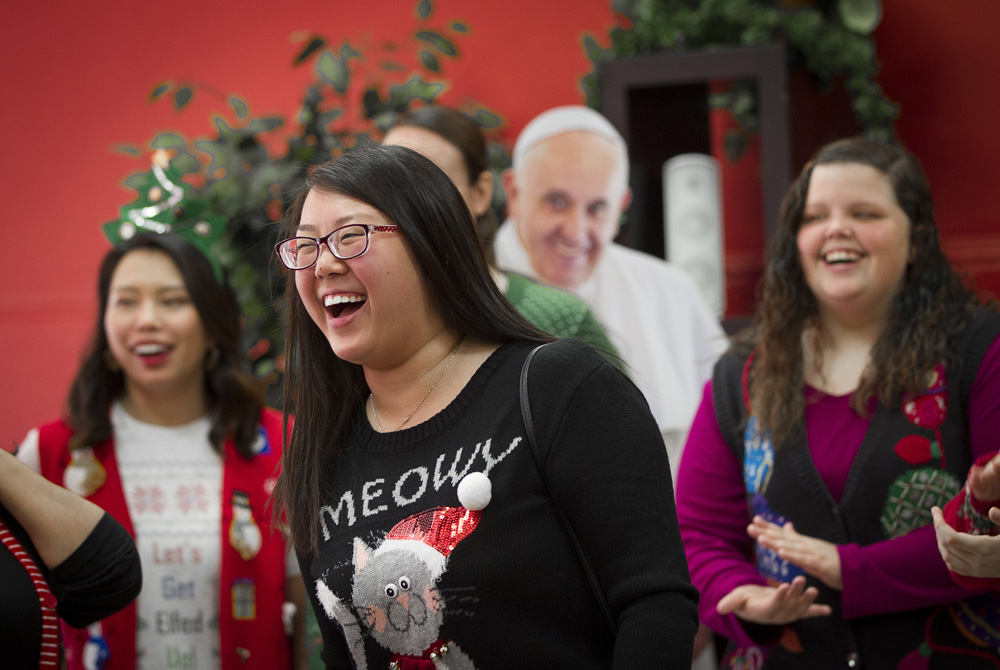 Celine Do laughs during a campus ministry contest for ugly Christmas sweaters on the campus of Lamar University, Dec. 10, 2015, in Beaumont, Texas. (CNS/Tyler Orsburn)

One issue raised in follow-up interviews focused on students after they leave campus, specifically on the lack of integration of college graduates into parish life. Although some of this work falls on the parishes themselves, the study also identified ways campus ministry could help prepare students for parish life after graduation.

In some ways, campus ministry is "almost too good," the report said. Mass is convenient and social, and ministry resonates deeply with their experiences. That is difficult, if not impossible, in a less homogeneous parish that serves Catholics of varying ages.

"While this is fantastic in many ways, a downside to this 'perfect fit' is that students are often unprepared to do the spiritually mature work of navigating a general parish experience," the report said.

Campus ministers could help address the declining numbers of young adults in parish life by encouraging responsibility and leadership, partnering with nearby parishes, facilitating transitions both into and out of campus ministry, and providing mentors for students and young adults, the report said.

Parishes may also be a source of assistance for Catholic students who attend two-year schools, many of whom are Latino, McCrabb said. A small percentage of community colleges employ full-time campus ministers.

The "ministry innovation project" on the topic of "parish bridging" will look to best practices for collaboration between parishes and campus ministry, McCrabb said.

Survey interviewees who raised graduates' parish experiences show how much campus ministers care about their students, Day told NCR. "They want to nurture a sense of lifelong faith," she said.

A version of this story appeared in the March 20-April 2, 2020 print issue under the headline: Shared ministry.