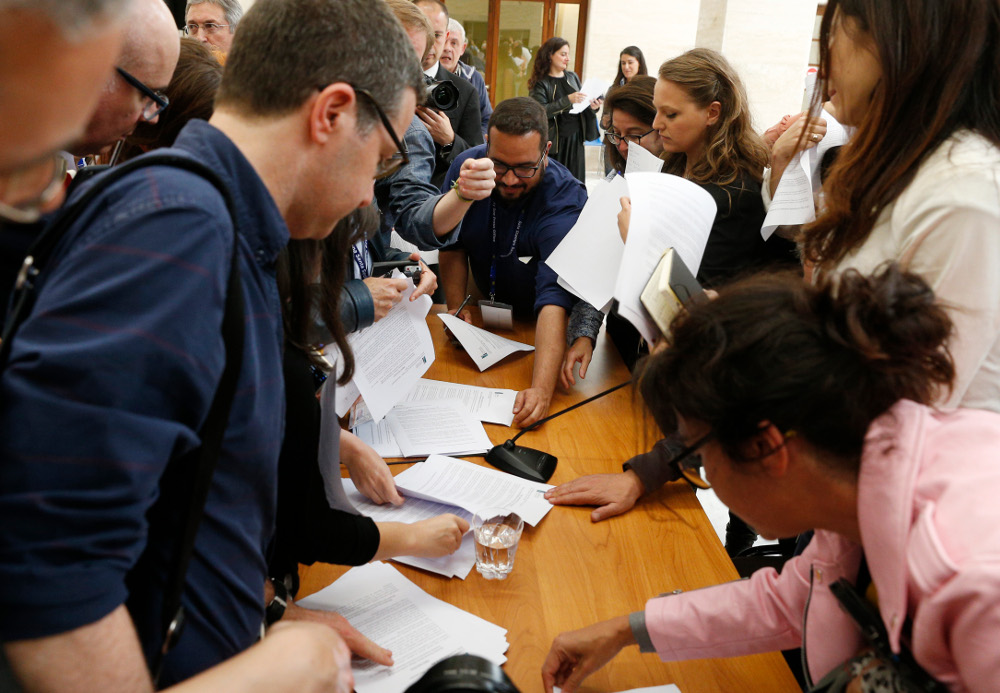 Reporters pick up copies of a statement given by Bishop Juan Ignacio Gonzalez Errazuriz of San Bernardo, Chile, and Auxiliary Bishop Fernando Ramos Perez of Santiago, Chile, after the bishops spoke at a press conference in Rome May 18. (CNS/Paul Haring)

Survivors of clergy abuse and their advocates praised Pope Francis for his confrontation with Chile's bishops over their handling of abuse cases, which led to a mass resignation today, and the survivors and advocates urged the pope not to allow the momentum for reform to slow.

"We didn't expect it and it is a powerful gesture," said Juan Carlos Claret, spokesperson for Lay Catholic group in Osorno, Chile, who opposed the 2015 appointment of Bishop Juan Barros to Osorno because of his alleged complicity in covering up the sexual abuse of minors.

Claret told CNN Chile that the church is a mother for the community and "today's big message is that they aren't going to protect impunity in the church and this is important as Catholics because we can't accommodate an injustice."

"The en masse resignation of the Chilean episcopacy is as stunning as it is justified," said Anne Barrett Doyle of the U.S.-based abuse watchdog group BishopAccountability.org. "Let's hope Pope Francis accepts all of the resignations and begins to re-build this profoundly corrupt church."

"The renunciation of the entire Chilean hierarchy might serve at least in the near term as a powerful deterrent to complicit bishops and religious superiors around the world," Barret Doyle said in a statement May 18.

Chilean abuse survivor Juan Carlos Cruz told the media outlet Listin Diario that the news of the resignations made him "tremendously happy to start to heal this church which doesn't deserve these real scoundrels and criminals."

"The church can't be led by men who have let themselves be corrupted by the things of the world," Cruz said.

Cruz was one of three abuse survivors who met with Francis individually for several hours over the last weekend in April, and then again together April 30. Cruz, James Hamilton and José Andrés Murillo were each abused as minors by Fr. Fernando Karadima. They were invited to the Vatican by Francis after the pope admitted making "serious mistakes" in his handling of clergy sexual abuse cases in Chile.

The bishops will continue in office unless or until the pope accepts their resignations.

Christian Weisner, of the German Catholic reform group We Are Church, hopes bishops in other parts of the world learn lessons from the Chilean bishops' experience.

The United States, Australia and some European countries, such as Ireland, Belgium and Germany, "have already experienced the disclosure of sexual violence in their churches and went through some crisis," Weisner told NCR. "However, in many other countries in Europe — and also in Africa and Asia — the existence of sexual violence still is totally ignored and denied."

"I think the Chilean situation and the reaction of Pope Francis will be a strong lesson to all other countries to take immediate action against sexual violence and its disclosure," he said.

"The Chilean case makes it clear to all of us that the times and habit of covering-up is over now," Weisner continued. "The cover-up of sexual violence has spoiled the credibility of the Roman Catholic Church worldwide much more than any other scandals, financial scandals, for example."

"This unprecedented decision of the Chilean bishops is probably the only way for the Catholic Church in Chile to heal the wounds of the survivors and to become a trusted church again," he said.

What the resignations mean

The document in which Francis gave his evaluation of the situation of the church in Chile was leaked May 17 by Chilean television news channel Tele 13. The Associated Press reported that the Vatican confirmed the document's authenticity.

Cruz told the news outlet Listin Diario that he recognized in the document some of the experiences he and other abuse survivors have talked about. "It moves me to have seen our conversations printed in the document that he gave to the bishops," Cruz said. "It's pleased me to see that it ended in the renunciation of the scourge that is the Chilean bishops."

In the document released by Tele 13, Francis accuses the bishops of destroying evidence of sex crimes, pressuring investigators to minimize abuse accusations and showing "grave negligence" in protecting children from pedophile priests.

"No one can exempt himself and place the problem on the shoulders of the others," Francis wrote in the document, which was published by Chilean T13 television and confirmed as accurate May 18 by the Vatican.

Fr. James Connell, a canon lawyer, retired priest in the Milwaukee Archdiocese and a member of Catholic Whistleblowers reform group, told NCR that while the unprecedented mass resignations make "a great headline," he hopes it isn't "a ploy that makes it impractical for the pope to accept all of the resignations."

"If it's an attempt by all the bishops to just be a team together, then it'd be so impractical that the pope cannot really accept all of those resignations," Connell said. This mass resignation won't contribute to justice if "it's not putting into the spotlight those bishops who are particularly culpable for what has gone on."

Resignation can only be a first step, Connell said and leaves a question: "Are [bishops] also going to provide the detailed information that is necessary to determine where the culpable behavior was and actually who deserves to be the particularly punished in this regard?"

Allowing all the truth to come forward, Connell said, "that takes more courageous effort than just as a group submitting individual resignations."

Archbishop Robert Gonzalez Nieves of San Juan, Puerto Rico, told NCR that the meetings this week between Francis and the Chilean bishops and the resulting resignations demonstrate "the seriousness with which Pope Francis is dealing with the issues surrounding sexual abuse of minors which he considers most grave and inexcusable."

"It also illustrates the resolve and humility of the Chilean bishops to make amends for their mistakes and to begin a new chapter," said Gonzalez, who, along with the Chilean bishops, is a member of the Episcopal Conference of Latin America known commonly by its Spanish acronym CELAM.

Barrett* Doyle said, "It's significant [that] Francis specifically denounced the bishops' mishandling of abuse cases. More than a dozen complicit bishops have been removed previously by Francis and his two recent predecessors, but none have been accompanied by a papal rebuke."

Claret said the pope is starting to clarify things but "we're going to continue learning the information as he makes decisions. Perhaps there are other cases that we'll discover with time."

Claret added that "in this process it's important that the pope has absolute freedom to decide" and that the bishops don't exercise influence as they have in the past.

But Barrett Doyle also said that "the Chilean situation is not unique" and that a pressing question emerges from today's announcement. 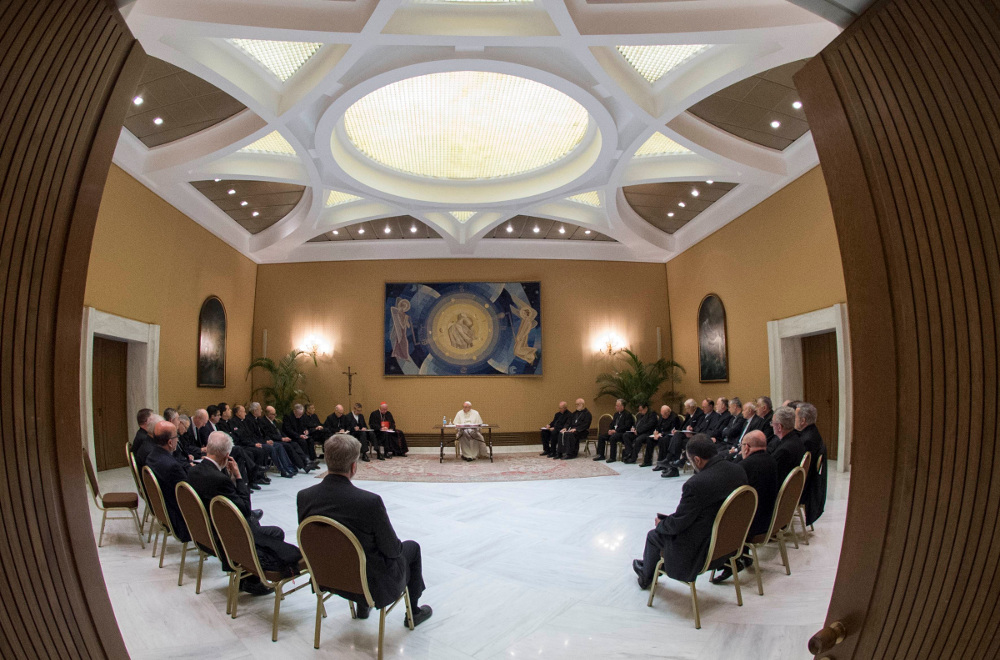 "Will the changes in Chile be incorporated in the universal Catholic Church?" she asked. "Or is this another tactic by the Vatican to quarantine reform, as was done in the United States in 2002 and in Ireland in 2010?"

"It is astounding that despite 16 years of revelations of institutional complicity, the Vatican still has no methodical approach for investigating officials who enable abuse," Barrett Doyle said.

Connell had high praise for Archbishop Charles Scicluna of Malta, whom Francis appointed in late January to investigate the abuse cases in Chile. Scicluna, who handled abuse cases that came to the Congregation for the Doctrine of the Faith under then-Cardinal Joseph Ratzinger and continued after Ratzinger became Pope Benedict XVI, was tasked with gathering testimony from victims as well as church officials. Reportedly he presented Francis with a 2,300-page report.

"A 2,300-page report? Good gracious, what documentation did they get?" Connell asked. Whatever was in that report, he said, "it was a document that caused Pope Francis to take a cause of action, a depth of action, maybe I should say, that's unheard of."

Scicluna's approach "may be an approach that needs to be taken elsewhere," he said. "Perhaps Pope Francis should instruct all the bishops of the world to release their attorneys from any sense of client-attorney privilege of confidentiality, and to make available all of the attorneys' documents that concern sexual abuse by clergy."

*This story was updated to correct the spelling of Anne Barrett Doyle's name.

This story appears in the Chilean bishops resign feature series. View the full series.
A version of this story appeared in the June 1-14, 2018 print issue under the headline: All of Chile’s bishops offer resignations. 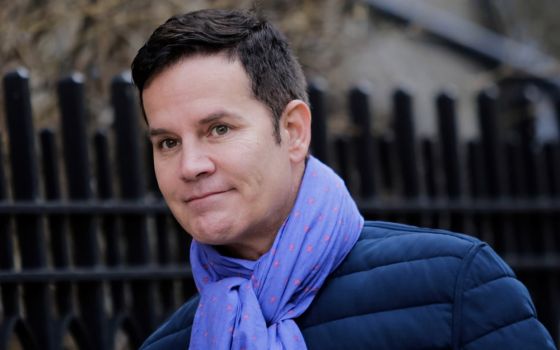 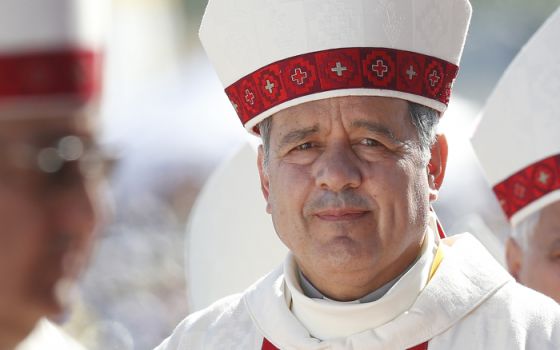