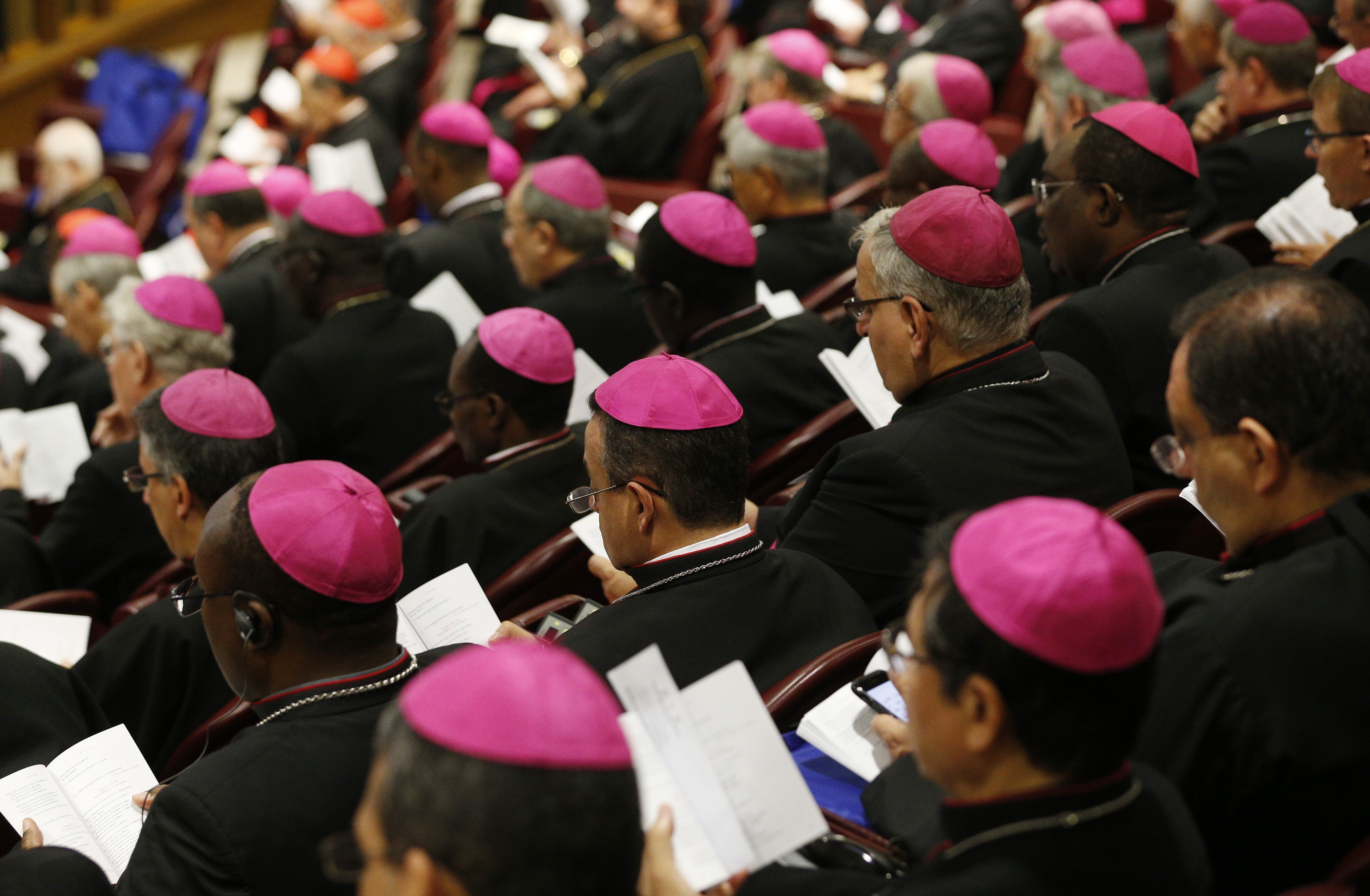 Bishops attend a session of the Synod of Bishops on young people, the faith and vocational discernment at the Vatican Oct. 18. (CNS/Paul Haring)

The importance of helping young people become ethical, active citizens who are unafraid of taking part in politics was a topic brought up by two members of the Synod of Bishops Oct. 16.

Cardinal Pietro Parolin, Vatican secretary of state, told the synod it was "urgent" to help form young people so they become active citizens or active in politics, driven by the commandment to love, which includes building a more just society.

The current crisis in democracy in the West, he said, is rooted in a lack of these values to the point that many people today consider "the miracle of unselfish love" as being "absurd."

This skepticism also can be seen in the way immigrants are treated, in the ongoing problems of violence and poverty, the lack of solidarity and people's indifference toward the law and justice, the cardinal said.

"Such an emergency requires giving a response," he said.

It is not enough for that response to be played out in the "private" sphere, on a personal level of loving one's own neighbor, he said. It demands that everyone also fulfill their responsibilities on a social, political and institutional level as well, he added.

Looking to the future with open horizons and long-term plans is part of the "challenge that young people must face," he said. But it is a challenge they should not have to face by themselves; "it is a political, not individual challenge."

Bishop Damiano Guzzetti of Moroto, Uganda, told the synod that "civic education is an important part of all of our church training programs."

"Young people are easily used by unscrupulous politicians," and the entire nation "needs to encounter the transformative power of the Gospel," said the Italian-born Comboni missionary.

All laypeople have the vocation to sanctify the world, he said, and that includes "bringing Christ into the world of politics."

The bishop reported an increase in the number of young people getting actively involved in politics, but he said that if they are "to bring Christian values to social life, then they have to be aware of the demands of social justice," become familiar with the principles of Catholic social teaching, and understand how all of that "ought to be applied in their own countries."

"It would be really good for Christian young people to have dialogue with Christian politicians to learn how politics works, and to discover its power and limitations," Guzzetti said.

"Unfortunately, young politicians find that many of their older Catholic peers are hardly models worthy of emulation and some are even an embarrassment to the church."

"As a church we should build up in young people a strong awareness and respect for the common good" in which they discover how to be tolerant of diversity and to begin a new form of political discourse, which today "is characterized by mud-slinging and insulting people who hold opposing views."

The 59-year-old bishop said Catholic schools and institutions should focus heavily on forming people's consciences, particularly regarding the concepts of subsidiarity and solidarity.

"If the conscience is dead, then young Christians cannot make a meaningful contribution to society," he said.