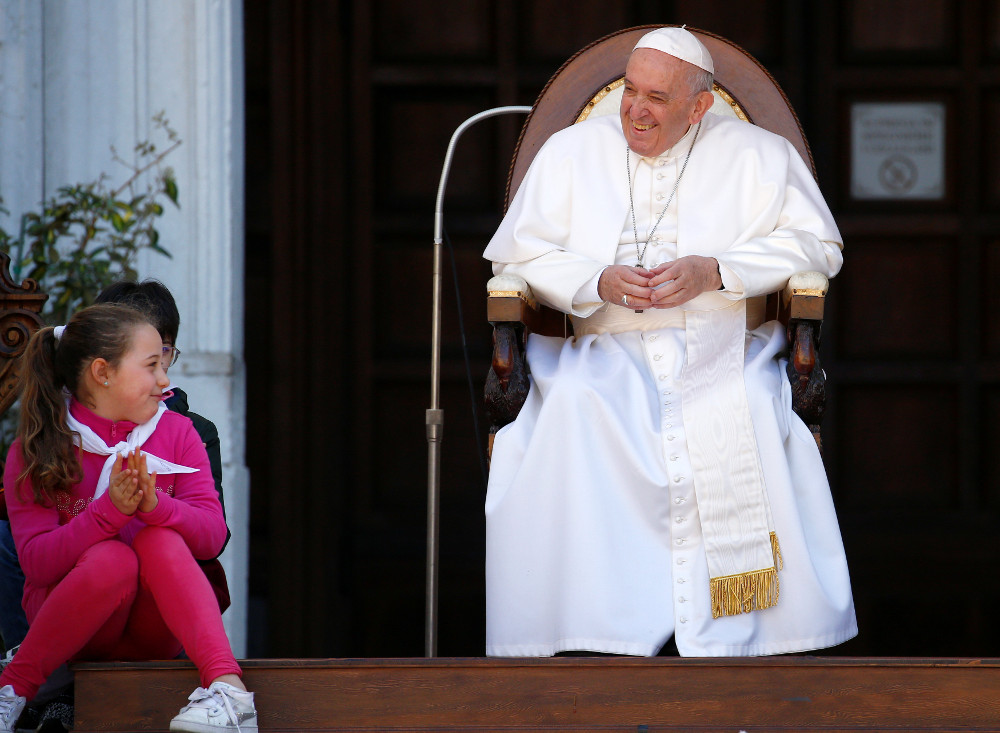 A teenager looks on as Pope Francis smiles during his visit to the Sanctuary of the Holy House on the feast of the Annunciation in Loreto, Italy, March 25, 2019. (CNS/Yara Nardi, Reuters)

Signing his document dedicated to young people, faith and discernment, Pope Francis said Mary, the mother of God, is a source of inspiration and strength for everyone who seeks to understand their vocation and remain faithful to it.

Greeting some 10,000 people, many of them families and young people, in Loreto, Italy, on the feast of the Annunciation, the pope said Mary can help all believers dedicate themselves to "the path of peace and fraternity, founded on welcoming and forgiving, on respect for others and on love as a gift of oneself."

"Mary is the model of every vocation and the inspiration of every vocational pastoral program: Young people who are seeking or questioning their future can find Mary to be the one who helps them discern God's plan for them and find the strength to follow it."

The pope chose to visit the Italian seaside town of Loreto on the March 25 feast day to sign his postsynodal apostolic exhortation — titled in Spanish, "Vive Cristo, esperanza nuestra," ("Christ, Our Hope, Lives").

The document, based on discussions and input garnered from the world Synod of Bishops on "young people, faith and vocational discernment," was to be released to the public April 2, the anniversary of the death of St. John Paul II. The intention was "to connect two pontificates, so loved and close to the younger generations," said Alessandro Gisotti, interim director of the Vatican press office.

The pope signed the document at the altar inside the small, one-room Holy House of Loreto, which tradition holds is where Mary was born and raised and where the Holy Family was thought to have lived when Jesus was a boy. It also is held to be the place where Mary received the angel's annunciation and conceived the Son of God through the Holy Spirit.

In his talk to those gathered in the square in front of the basilica housing the sanctuary, the pope said he wanted to sign the document on the date and at the place of the Annunciation to highlight how the Annunciation reveals what is necessary in the vocational process: listening to God's word and God's will, inquisitive discernment and bold decision-making.

"One must be ready and willing to listen and welcome God's voice," which is hard to recognize if life is too "noisy" or agitated, he said. Quiet and extended reflection is necessary, he said, if one is going to be able to go below the surface and discover the "moral and spiritual forces" at work in one's life.

And God is always at work, giving and providing for his disciples no matter how "poor and small" they may be, he added.

Because young people and families are not two separate realities, he said, pastoral programs and outreach must be dedicated to both at the same time because "very often young people are what their family gave them with their upbringing."

"It is necessary to rediscover God's plan for the family," he said, which is "founded on marriage between a man and a woman," and to emphasize the family's "great and irreplaceable" role in serving life and the community.

The pope prayed that God, through Mary's intercession, would help the faithful bring the "Gospel of peace and life to our peers, who are often distracted, caught up in material interests" or surrounded by a spiritual desert.

"There is a need for people who are simple and wise, humble and courageous, poor and generous. In other words, people who, taught by Mary, welcome the Gospel without reservation into their life."

The pope began his visit to the sanctuary with a long moment of quiet prayer seated inside the Holy House. He venerated the statue of Our Lady of Loreto, which in 1922 was carved out of cedar trees from the Vatican Gardens to copy the 14th-century figure destroyed in a fire.

He then celebrated a private Mass inside the Holy House with a small number of people, while thousands watched on large screens inside the basilica and outside in the square.

When Mass was over, the pope signed the postsynodal document on the altar, under the image of Mary, so as to entrust to her the document and its fruitful pastoral outcome. The pope also placed a gift on the altar — a golden stem of roses in a small silver urn.