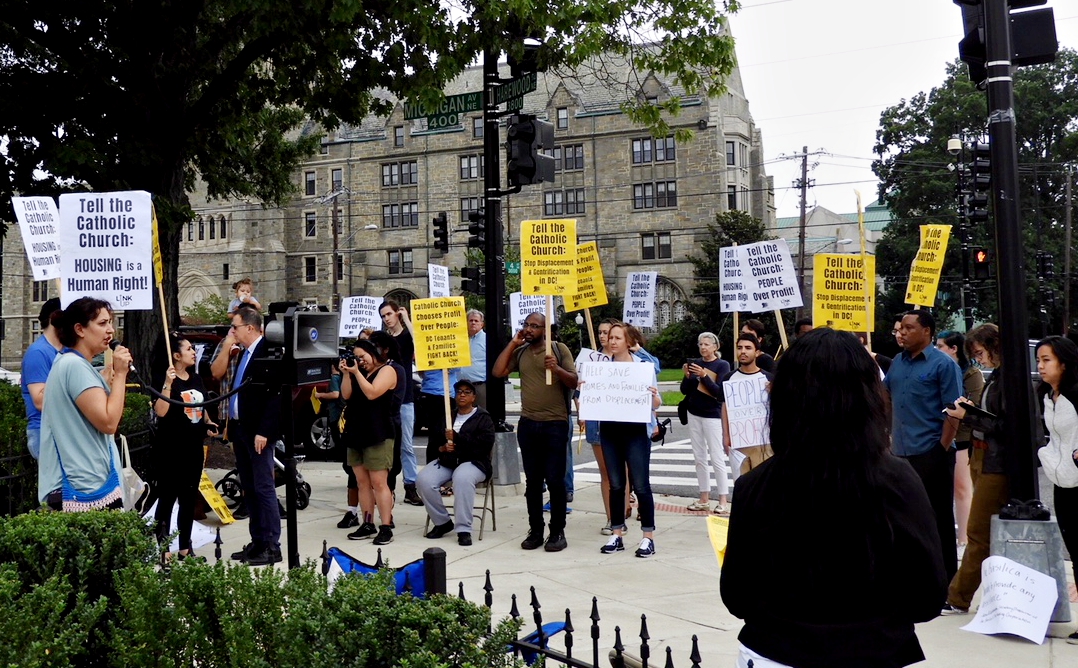 Tenants and their supporters rally outside of the Basilica of the National Shrine of the Immaculate Conception Sept. 16, calling on the church to protect affordable housing and prevent displacement of the people living in two apartment buildings the basilica plans to sell. (Courtesy of Justice First)

Tenants in two rent-controlled apartment buildings bequeathed in May 2016 to the Basilica of the National Shrine of the Immaculate Conception met with representatives of the basilica in early October in an effort to prevent the sale of the buildings to buyers that tenants believe will either raise the rent beyond what the current tenants can afford or will occupy the units themselves.

A Nov. 12 deadline for the tenants to find another buyer for two of the Washington, D.C., properties is looming. Tenants have secured funding for escrow deposits from Union Market Neighbors, a local nonprofit that advocates reasonable development, to turn the two buildings into an eight-unit co-op. The tenants plan to apply for loans as a collective from the D.C. Department of Housing and Community Development, which has funds set aside for such requests.

The deal is contingent on securing those loans and on the basilica lowering the asking price, which the tenants have requested, according to one of the residents.

The two buildings in question, part of a portfolio of 13 properties that included multi-unit buildings and single-family homes, had an appraised value of $580,990 and $485,680 at the time they were conveyed to the basilica, according to public records. The current asking prices for the two are $675,000 and $690,000, respectively.

The two four-unit buildings, where renters are paying about $700 to $900 per month for a one-bedroom apartment, are located close to the basilica in a gentrifying neighborhood of Washington. The city suffers from a significant lack of affordable housing for low-income residents.

"The scariest part of all is having to move and find another place to live," said Mayra Barazza, 26, who lives in one of the buildings and works as a maternity clothing company sales representative at an area department store. "Between me and my husband, we don't make much money. And we have three small children."

Tenants in the two buildings said they've learned rents in another building whose sale has gone through were recently raised by 50 percent. Barazza said she and her husband pay $909 for a one-bedroom apartment for their family of five.

A National Low Income Housing Coalition report in June ranked D.C., with a median income of $117,200, as the second most expensive state in the nation for housing costs, with fair market rent (defined as the 40th percentile of gross rents for standard rental units) for a two-bedroom apartment of $1,793 per month. That means a person working at D.C.'s minimum hourly wage of $13.25 would need to work 104 hours per week to afford that rent.

The tenants were accompanied to the Oct. 10 meeting at the basilica by lawyers from the nonprofit Legal Aid Society of the District of Columbia, which is representing the residents in one of the two buildings whose sale has not been finalized. Housing and community activists working with the tenants were not permitted to attend and were told the meeting was closed to the public.

At least three basilica representatives, including comptroller Kevin Kavanaugh, were present at the meeting, as were two lawyers representing the basilica's title-holding corporation, BNSIC. Kavanaugh did not respond to email and telephone messages left by NCR. Attempts to reach Msgr. Walter Rossi, rector of the basilica, by email were also unsuccessful. Neither was made available to NCR for comment.

Rossi's name and signature, as president and director of BNSIC, appear on official documents pertaining to the upcoming sale of the two buildings. Basilica spokesperson Jacquelyn Hayes said via email that proceeds from the sales would go to support the basilica's mission.

Tenants learned of the pending sales in June, four months after the buildings had been conveyed to the basilica from probate, when stacks of unidentified paperwork were deposited in their building lobbies.

At that time, the clock began ticking on a process called TOPA (Tenant Opportunity to Purchase Act), through which residents have the right, within a finite time frame, to purchase a building that is up for sale or find a third-party purchaser who would meet all material terms of sale established by the seller. In this case, residents had hoped to find a purchaser who would agree to keep the rents affordable.

The tenants' original TOPA rights were set to expire Oct. 24, but the basilica's representatives agreed at the meeting to extend the deadline to Nov. 12, per the tenants' request.

Tenants had a list of seven requests, including that the basilica lower the asking price of the buildings by 10 percent, post earnest money deposits for tenants, work with parishioners and donors to raise the earnest money, and help the tenants to identify and negotiate with nonprofit groups that could partner to purchase the buildings.

Beth Harrison, a lawyer with Legal Aid who is working with one of the buildings, said efforts to find a third-party purchaser have not been fruitful so the residents have decided to pursue the strategy of purchasing the two buildings together as a co-op.

Residents reported that they tried repeatedly, by telephone, email and U.S. mail, to reach out to the basilica to clarify their options upon learning of the intent to sell, but received little or no response. They also reported that regular maintenance of the buildings, including pest control, ceased when the basilica began using a different property management company in February.

Heather Benno, who lives with her husband and toddler daughter in one of the buildings, has described a confusing process that has often seemed deliberately opaque, starting with the manner in which tenants in her building were alerted to the sale and continuing with walkthrough visits of their apartment at odd hours, including as late as 9 p.m., by laypeople and members of the clergy who did not identify themselves.

Benno also attended the meeting, at which she and other tenants had hoped Rossi or another member of the clergy would be present. Benno was disappointed not to have an opportunity to make their case to Rossi, to whom the tenants had previously addressed a letter for delivery to the basilica's Board of Trustees, the names of which have not been made public. 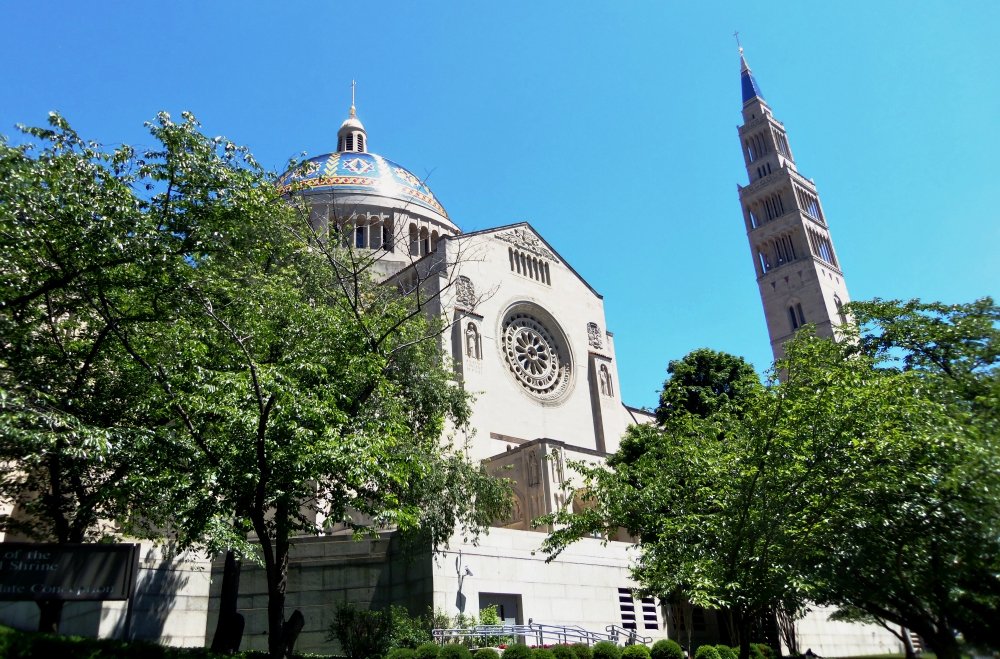 The Basilica of the National Shrine of the Immaculate Conception in Washington, D.C. (Wikimedia Commons/Farragutful)

According to Benno's notes from the meeting, Kavanaugh, the comptroller, explained Rossi's absence by saying, "Msgr. Rossi is really the priest of this church. We're in the business of running the church; we're not in the business of being a landlord."

That response did not satisfy Benno, who is managing attorney for Immigration Legal Services at Catholic Charities of Baltimore.

"So Msgr. Rossi is really a spiritual leader, but his name is all over the contracts and he's the president of the holding company," said Benno, with obvious frustration. "Mr. Kavanaugh didn't concede they had done anything ethically or morally wrong in their handling of the matter. But they conceded it was a bad decision not to communicate at all with tenants in a reasonable time."

The experience, in addition to raising panic among residents — which include several generations of families, some of whom have lived in the buildings for more than a decade — has left a bad taste in the tenants' mouths, because they feel that the Catholic Church itself is evicting them.

"At the end of the day, I feel like, because they're a church, they should be for the people and try to help the community out," said Barazza, who asked at the meeting if the basilica would take up a collection for the tenants, a request that was denied. "They think they're not doing anything wrong. They said, 'We're not pushing you out of your homes.' And we told them, you're not directly doing it, but you're selling to people who are going to do it."

A version of this story appeared in the Nov 16-29, 2018 print issue under the headline: Tenants fear rent increases as basilica plans to sell apartments.