Theologian: Interfaith dialogue must face up to modernity 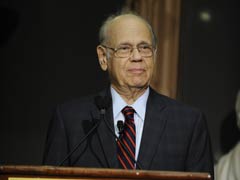 Catholic dialogue with Jews and Muslims does not contradict the Catholic proclamation of the Gospel, although tensions between dialogue and evangelization are not always easily resolved, he said. “Interreligious dialogue transforms the traditions involved in it: It purifies them and enriches them,” he said.

But if such dialogues are to be authentic, he said, they must also work together to face up to the challenges that classic world religions face in today’s globalized world of technology, finance, trade, and other cultural and secular forces.

Baum, now 87, served as one of the first experts for the Secretariat for the Promotion of Christian Unity, formed in preparation for the Second Vatican Council. On the eve of the 50th anniversary of the founding of the secretariat in 1960, he delivered this year’s Nostra Aetate Lecture, an annual talk sponsored by the Jesuits’ Georgetown University in Washington to advance the study of interreligious dialogue.

Nostra Aetate is the 1965 Vatican II declaration on Catholic relations with non-Christian religions, which gave special attention to Catholic-Jewish and Catholic-Muslim relations.

“Modernity is an ambivalent civilizational force affecting the entire globe that challenges every society and raises difficult challenges for every religion.

“Arnold Toynbee already argued that religious cultures react to this challenge in one of three ways: by rigidly clinging to their inherited practices, by surrendering to the invasion of modernity, or by finding inspiration in their classical text for an original, creative response. No religion can escape this challenge.”

Baum noted that after more than a century of rejecting Enlightenment ideas of human rights and democratic pluralism, the Catholic church “was able, at the Second Vatican Council, to say a critical yes to modernity, while continuing to oppose scientific reductionism and utilitarian individualism.”

“A similar wrestling with the challenge of modernity is taking place in the other world religions,” he said. “Interreligious dialogue, it seems to me, may not avoid this topic.”

Baum, now professor emeritus of theological ethics and sociology of religion at McGill University in Montreal, addressed the evolution of Catholic-Jewish and Catholic-Muslim relations since the council, and especially in recent years under Pope Benedict XVI.

His nuanced theological presentation challenged some popular negative perceptions of the Benedict papacy, especially on the subject of Catholic-Muslim relations.

He noted that just two months after Benedict’s “hostile remark” Oct. 12, 2006, in Regensburg, Germany, “suggesting that Islam had a special relationship to violence and worshiped a divinity different from the God of Christians,” the pope delivered a speech in Turkey “recognizing that Muslims and Catholics worship the same God and, more than that, have a common mission to give witness to the Almighty in an increasingly secular world,” Baum said.

In addition, he noted, the open letter to the pope by a large group of world Muslim scholars in the wake of his Regensburg talk -- noting that Muslims and Christians form over half the world’s population and should seek mutual respect, cooperation and understanding for the sake of world peace -- led Benedict to approve “establishment of a permanent forum for Catholic-Muslim dialogue.”

Baum suggested at several points in his talk that Benedict’s thinking on interreligious dialogue has evolved over the years -- especially from the instruction Dominus Iesus, which he issued in 2000 as Cardinal Joseph Ratzinger, prefect of the Vatican Congregation for the Doctrine of the Faith, to the present day.

In Dominus Iesus, Baum noted, Ratzinger argued basically that “interreligious dialogue is part of the church’s evangelizing mission, and, secondly, Catholics involved in this dialogue must keep in mind that it ultimately aims at the conversion of their partners.”

Just four months later, Ratzinger wrote a lengthy article in the Vatican newspaper, L’Osservatore Romano, in which he “recognizes that dialogue with Jews is not oriented toward their conversion,” Baum said.

He noted that this October, King Abdullah II of Jordan introduced a proposal, with the support of the Vatican and about 20 other nations, for a World Interfaith Harmony Week to be celebrated worldwide every year in the first week of February. The United Nations accepted the proposal.

“The king’s personal envoy, Prince Ghazi bin Mohammad, introduced the proposal by a remarkable speech,” Baum said. “In it he mentions the Second Vatican Council was the starting point of a movement of interreligious dialogues that produced the shared conviction that the time has come for the worldwide promotion of religious harmony.”

“I am convinced that the dynamics produced by the interreligious dialogue has produced Pope Benedict’s remarkable change of heart from the hostile remark at Regensburg to the support for Muslim-Catholic dialogue and the World Interfaith Harmony Week,” he said.

In the audience for Baum’s lecture was American Paulist Fr. Thomas F. Stransky, recently retired as director of the Tantur Ecumenical Institute for Theological Studies, near Jerusalem. Stransky was one of the original staff members 50 years ago of the Secretariat for Promotion of Christian Unity, and he delivered Georgetown’s first Nostra Aetate Lecture in 2006.

He and Baum are the sole remaining original participants in that historic body, which helped set the ecumenical-interreligious direction of Vatican II and oversee its follow-up in church policies.

Theologian: Interfaith dialogue must face up to modernity