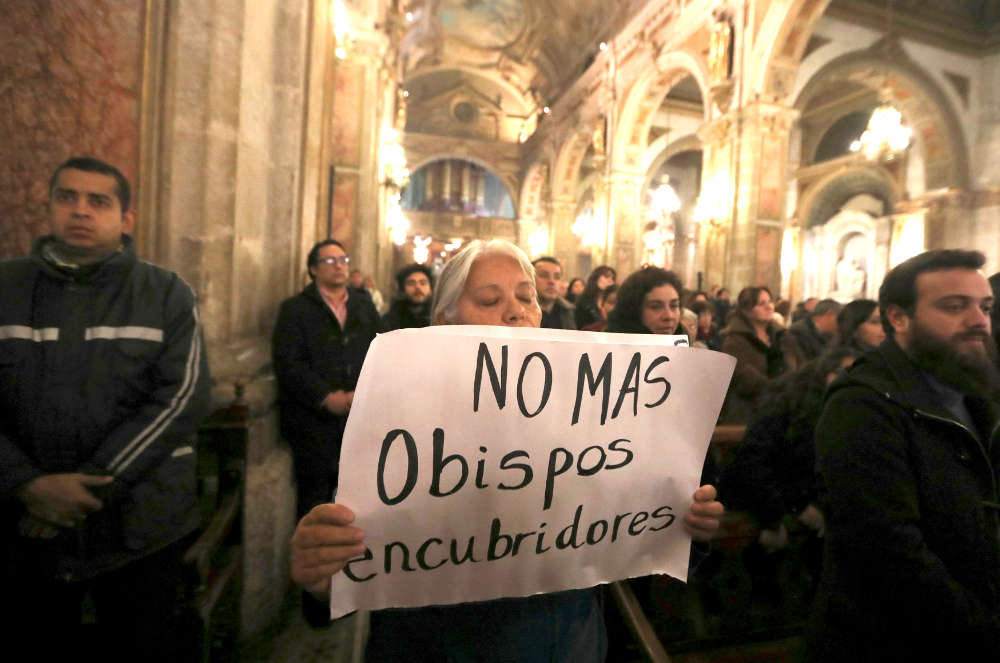 A woman holds a sign in protest during Mass July 25 at the cathedral in Santiago. Chile's bishops resigned en mass in May after revelations of sexual abuse and corruption. A group of U.S. theologians and lay leaders are calling for the same public act of penance from U.S. bishops. (CNS/Reuters/Ivan Alvarado)

Editor's note: This story was updated at 9:45 p.m. Central time with comments from Susan Reynolds and an update on the number of signers. Second update at 10:15 a.m. extends the time for signing the statement.

More than 3,000 theologians, educators and lay leaders have called for all U.S. bishops to submit their resignations to Pope Francis, much like Chile's 34 bishops did in May after revelations of sexual abuse and corruption, as a public act of penance and a "willing abdication of earthly status."

"Today, we call on the Catholic Bishops of the United States to prayerfully and genuinely consider submitting to Pope Francis their collective resignation as a public act of repentance and lamentation before God and God's People," said a statement, posted in English and Spanish on the Daily Theology blog on Friday.

"Only then might the wrenching work of healing begin," it said.

The statement was released Friday, with 140 signers, in response to Tuesday's release of a grand jury report that detailed seven decades of sexual abuse by clergy and cover-up by church leaders in six dioceses in Pennsylvania, as well as allegations earlier this summer that former archbishop of Washington, Theodore McCarrick, sexually abused two children and adult seminarians.

Those interested can sign the statement by midnight Wednesday, Aug. 22, when it, along with a cover letter, will be sent to the president and vice presidents of the United States Conference of Catholic Bishops (USCCB), as well as to to the  apostolic nuncio in  Washington D.C. and to the Congregations of Bishops in Rome.

"We are brought to our knees in revulsion and shame by the abominations that these priests committed against innocent children," the statement said. "We are sickened in equal measure by the conspiracy of silence among bishops who exploited victims’ wounds as collateral in self-protection and the preservation of power. It is clear that it was the complicity of the powerful that allowed this radical evil to flourish with impunity."

Acknowledging that some bishops are "humble servants and well-intentioned pastors," the statement’s signers still urged a collective resignation by all bishops because of the "systemic nature of this evil."

"Systemic sin cannot be ended through individual goodwill. Its wounds are not healed through statements, internal investigations, or public relations campaigns but rather through collective accountability, transparency, and truth-telling," the statement said.

"We are responsible for the house we live in, even if we did not build it ourselves," it said.

The statement also expressed support for "sound proposals," such as those for external investigations like the one in Pennsylvania, which "would begin to convert this ecclesial culture of violence into one of transparency, accountability, humility, safety, and earned trust."

But "truth-telling and repentance are prerequisites to conversion" at the institutional, as well as individual, level, the statement said, noting that "no genuine process of healing and reform can begin" without such a demonstration of repentance.

"As a collective body, the bishops have given the faithful little indication that they recognize and take accountability for the breathtaking magnitude of the violence and deceit that has continued unabated under their leadership," it said.

The statement was organized by Susan Reynolds, assistant professor of Catholic Studies at Candler School of Theology at Emory University in Atlanta, who worked with editors of the Daily Theology blog in writing it.

“This is not a call for blood,” Reyolds told NCR. “But it’s a large cross section of the Catholic Church saying that what we need in this moment are not more words. What we need is a genuine demonstration of deep sorrow, contrition and a recognition of the harm that this has caused.”

Reynolds, who has lived in Chile, took as inspiration the mass resignation by that country’s bishops earlier this spring. The pope has accepted five of Chile's bishops' resignations so far. The statement notes that Chile has an active bishop-to-Catholic ratio similar to the one in the United States, while the crisis in the U.S. seems to have a broader geographic scope.

"After years of suppressed truth, the unreserved decisiveness of the Chilean bishops' resignations communicated to the faithful a message that Catholics in the United States have yet to hear, with an urgency we have yet to witness: We have caused this devastation. We have allowed it to persist. We submit ourselves to judgment in recompense for what we have done and failed to do."

Given the overwhelming and positive response Reynolds has received since the statement was released, she believes many U.S. want more than the admittedly necessary structural reforms, such as those enacted after the Boston crisis in 2002. “They look at the bishops then and now and say, ‘I don’t think they understand how horrific this is, and if they do understand it, it’s not coming through,’” she said.

On social media, one criticism was that the initial signers did not include many prominent names—a comment Reynolds sees as evidence of the clerical culture that is at the root of this and other problems in the church.

The statement notes that the issue is not liberal or conservative. "It does not emerge from a particular faction or ideology but rather from the heart of a wounded Church," it said. "It is an expression of fidelity to the victims, to Jesus Christ, to the Church in whose service we have devoted our lives."