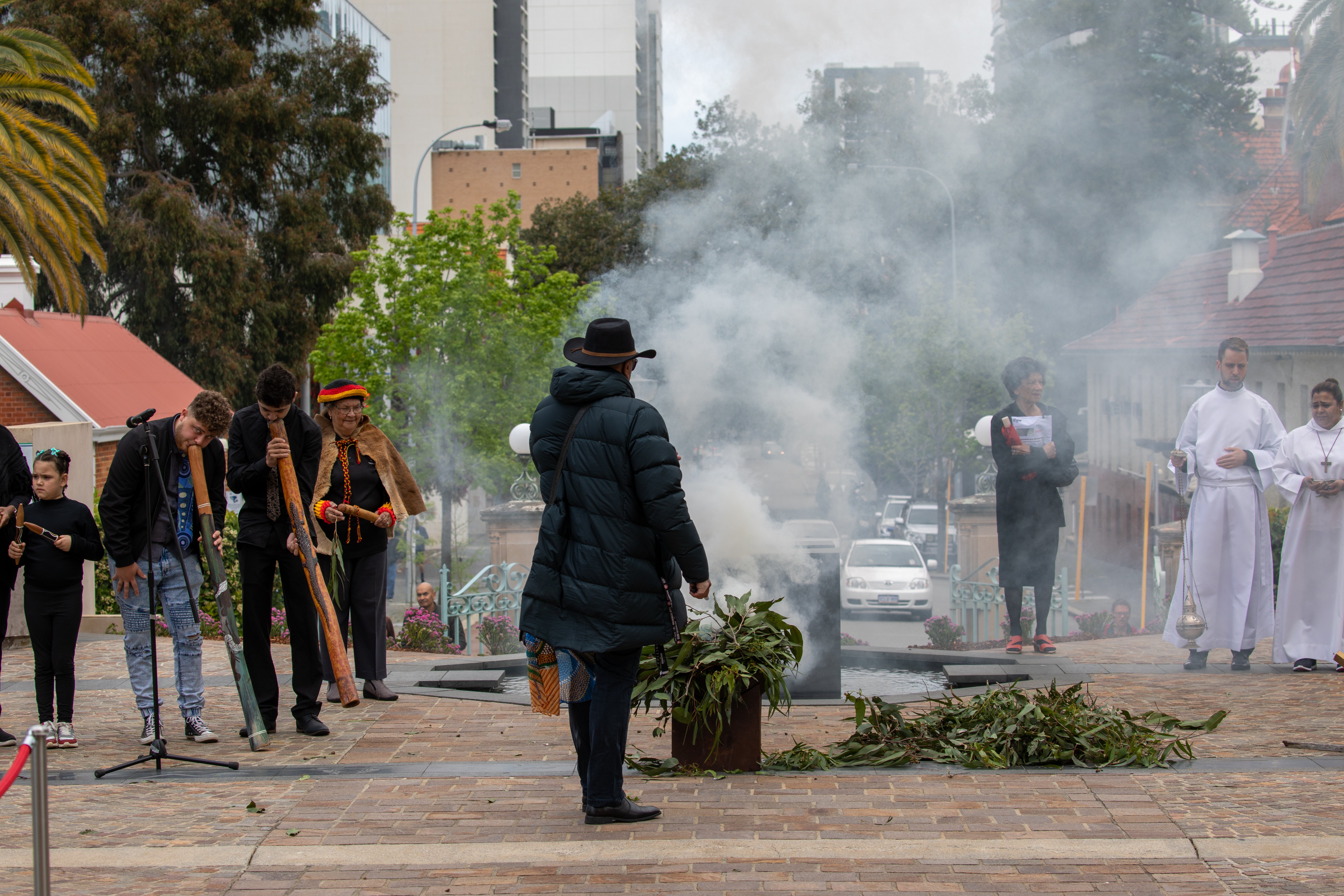 The Welcome to Country Smoking Ceremony is pictured during the opening Mass of the First Plenary Council at St. Mary's Cathedral in Perth, Australia, Oct. 3, 2021. (CNS photo/Ron Tan, courtesy Archdiocese of Perth)

In their Plenary Council process, the Catholics of Australia have been called, like the biblical patriarch Abraham, "to step into a future which he could not control and which he did not fully understand," said Archbishop Timothy Costelloe of Perth.

The archbishop, president of the Plenary Council, opened its first weeklong assembly with a Mass livestreamed Oct. 3 from St. Mary's Cathedral in Perth. Bishops in other cities also celebrated Masses to mark the council's opening.

At the beginning of the liturgy, he told the congregation and those watching online in Australia and around the world, "I pray that this celebration will be a source of hope for all of us as the people of God in Australia takes another important step in our journey of discernment as we seek to understand just what it is that God is asking of us in Australia at this time."

The plenary assembly Oct. 3-10 was to bring together 278 council members — bishops, priests, members of religious orders and laypeople — for online prayer, reflection and discussion.

The delegates' discernment is meant to reflect on questions, concerns and suggestions that arose from a nationwide consultation with Catholics that began on Pentecost in 2018. Through the consultation, about 220,000 people responded to the question "What do you think God is asking of us in Australia at this time?"

Somewhat like a national synod, a plenary council is called to consult on issues facing the church in a specific country; but unlike a synod, it can issue decrees that, once approved by the Vatican, are binding on the church in that country.

Outside the Perth cathedral before Mass, two Noongar elders, accompanied by others playing the didgeridoo and clapping sticks, led a smoking ceremony to drive away bad spirits. Inside the cathedral, the elder Noongar woman welcomed the delegates to her people's traditional land in the southwest corner of Western Australia.

In his homily, Archbishop Costelloe told Australian Catholics that, in prayer and opening to the working of the Holy Spirit, they have nothing to fear from the process.

"In the midst of the raging winds and crashing waves which sometimes threaten to overwhelm us, we hear again the words of Jesus to his first disciples, 'Take courage, I am with you. There is no need to be afraid,'" the archbishop said.

"Surely God is asking us in Australia at this time to rediscover and live more faithfully our vocation to be a pilgrim people, brothers and sisters in a community of disciples," he said. "We are on the way — but we are not there yet."

As delegates reflect on how Catholics in Australia live and pray together, provide pastoral care, education, health care and social services, as they look at church "structures and governance, and many others things besides," he said, "the Lord is inviting us to reflect deeply and courageously on how we can better, as individuals and as communities of faith, be this living image of the life-giving God who, in Christ, is always seeking to be present and active in our world."

Although Archbishop Costelloe did not mention the clerical sexual abuse crisis, which in part motivated the desire to seek new ways to live the Gospel, he asked delegates to reflect on the question: "How can we be a humble, healing and merciful church if we have not tasted the bitter gall of our failings and sins, and then, purified by the Lord, begin to reflect Jesus, the face of the Father's mercy, healing and compassion?"

"How can we be a joyful, hope-filled, servant church if we do not contemplate Jesus on his knees washing the feet of his disciples?" he asked. "How can we be a church open to conversion, renewal and reform if we fail to let the cry of Jesus, 'Repent and believe in the Good News,' pierce our hearts?"