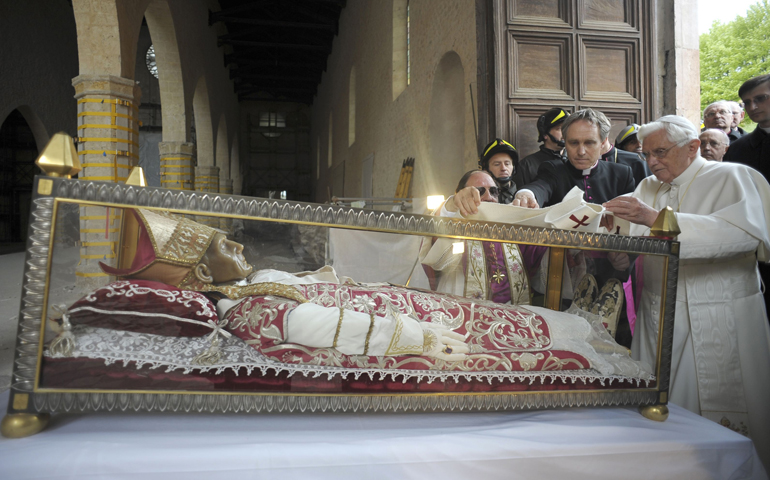 The pope's surprise announcement Monday fundamentally alters Catholics' perceptions of popes to come, the academics say. Catholics long used to identifying the pope by individual traits -- John Paul II leaning on his crozier during an audience or Benedict with both arms extended, waving to a crowd -- may, they say, need to become used to the idea of the pope as less a personality and more an office holder.

"The best thing about Benedict's announced resignation is that it helps restore our understanding of the papacy to that of an office rather than a personal possession," writes Brian Flanagan, a theology professor at Marymount University in Arlington, Va.

"The papacy can now be clearly seen as a crucial office of the universal church, but one in which the pope remains an officeholder, rather than an irreplaceable, magical figure," writes Flanagan, who is an ecclesiologist, or a theologian who studies the shape and structure of the church through the ages.

Terrence Tilley, the chair of theology at Fordham University, took a similar tack in a comment Monday at Commonweal magazine.

"Benedict's resignation helps refine the notion of the papacy and, thanks be to God, distinguishes the person from the office," wrote Tilley, a former president of the Catholic Theological Society of America, which represents about 1,400 U.S. theologians.

Of course, in a hierarchical system marked by the influence of individual prelates, future popes will still exercise wide-ranging power. As one of the world's last singular monarchs, popes are considered to have near-complete authority over all things Catholic.

Popes alone can appoint or fire bishops, approve the staffing of Vatican offices, or give definitive guidance to the world's 1.2 billion Catholics.

But commenting on the pope's wide power in a 1998 document he wrote as prefect for the Vatican's Congregation for the Doctrine of the Faith, Ratzinger himself said the pope was a near-supreme ruler but not an absolute one.

"Since the power of the primacy is supreme, there is no other authority to which the Roman Pontiff must juridically answer for his exercise of the gift he has received," Ratzinger wrote in a document intended as guidance to then-Pope John Paul II.

"This does not mean, however, that the Pope has absolute power," he continued. "The ultimate and absolute responsibility of the Pope is best guaranteed, on the one hand, by its relationship to Tradition and fraternal communion and, on the other, by trust in the assistance of the Holy Spirit who governs the Church."

While the pope is a supreme ruler, Ratzinger effectively wrote, he still must listen to the guiding of the Holy Spirit.

Ratzinger made oblique reference to that earlier line of thought in his announcement Monday, stating it was "after having repeatedly examined my conscience before God" that he decided to resign.

Beyond distinguishing the individual pope from his office, that reference to the callings of conscience and the Holy Spirit in Benedict's resignation may have also effectively reduced the size of the papacy, wrote Vincent Miller, a theologian at the University of Dayton, on Monday at America magazine.

Benedict's resignation represents "a reduction of the office in a way, subordinating it to tradition," Miller wrote.

"I recall a conversation with a European scholar who criticized Benedict for making the papacy 'small,' " Miller wrote. "In some ways, I suspect that was his intent. Benedict is carefully refining the definition of the papacy even as he leaves it."

Flanagan, who is also a board member of the College Theology Society, which boasts about 900 members, summed up the effects of the pope's shocking move with a wager.

"I'd bet €20 ... that Benedict is doing this with a great deal of conscious awareness of the ecclesiological, and not just the practical, implications for future papacies," he wrote.

"The precedent may well be his greatest gift to the church."

Sharp-eyed observers may think that gift has been long in the making.

In a possible nod to his future resignation, Pope Benedict in 2009 visited the tomb of one of his predecessors, St. Celestine V, a 13th-century pope who was the last (and possibly only) pope to voluntarily resign his office.

In a visit then to the central Italian city of L'Aquila, where Celestine's remains are kept, Benedict prayed before the late pope's remains before placing one of his vestments on top of Celestine's casket.

The piece of clothing Benedict left behind? His pallium, a long woolen band granted to archbishops only by the pope, signifying their unity with the supreme pastor of the church.

As for whether the next pope will interpret Benedict's surprise move as a shift in focus from papal personality to papal office or from supreme to near-supreme papal power, only time will tell.

Following Benedict's official resignation from the papacy at 8 p.m. Roman time Feb. 28, the meeting of cardinals who will select his successor is expected to begin between March 15-20.