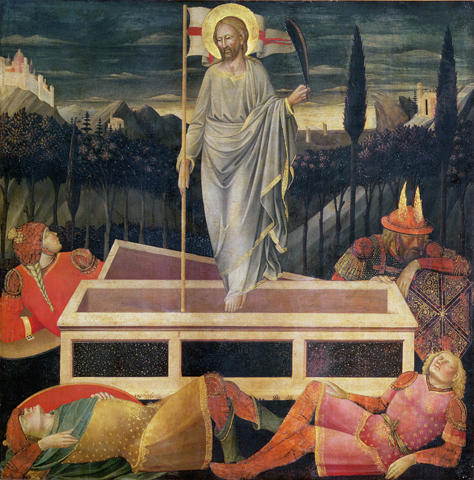 "On the third day, he rose again."

That line, from the Nicene Creed, is the foundational statement of Christian belief. It declares that three days after Jesus died on the cross, he was resurrected, a glimmer of the eternal life promised to believers. It's the heart of the Easter story in seven little words.

But how that statement is interpreted is the source of some of the deepest rifts in Christianity -- and a stumbling block for some Christians and more than a few skeptics.

Did Jesus literally rise from the dead in a bodily resurrection, as many traditionalist and conservative Christians believe? Or was his rising a symbolic one, a restoration of his spirit of love and compassion to the world, as members of some more liberal brands of Christianity hold?

The struggle keeps some Christians from fully embracing the holiday. A 2010 Barna poll showed that only 42 percent of Americans said the meaning of Easter was Jesus' resurrection; just 2 percent identified it as the most important holiday of their faith.

"More people have problems with Easter because it requires believing that Jesus rose from the dead," said Jesuit Fr. James Martin, author of the new book, Jesus: A Pilgrimage.

Scott Korb, 37, has a different take. Though he now describes himself as a non-practicing Catholic, he once wanted to become a priest. At that time, he believed Jesus literally rose from the dead, but now finds himself accepting the story only symbolically.

"The miracle of a bodily resurrection is something I rejected without moving away from its basic idea," Korb, a New York University professor, said. "What I mean is that we can reach the lowest points of our lives, of going deep into a place that feels like death, and then find our way out again -- that's the story the Resurrection now tells me. And at Easter, this is expressed in community, and at its best, through the compassion of others."

And that change -- from a literal to a metaphorical approach -- has given the story more power, he said.

"There is only one story to be told of a single man who dies and then rises," Korb said. "But if we think about the metaphor of the Resurrection, that allows us to return to the story year after year and find new meaning in it."

Reg Rivett, 27, finds the repetition of the Easter story a big problem. A youth minister at an evangelical house church near Edmonton, Canada, he said his belief that Jesus literally rose from the dead is central to his Christian identity and faith. Nonetheless, he still has conflicting feelings about how the Resurrection story is used in some circles.

"You hear about it year after year or at the end of every youth event -- 'This is why Jesus came and why he died,' " he said. "We tack it on to the end of everything and that is not what it should be. It's like we've taken something that is very sacred and made it very common."

That leads to some internal conflict on Easter Sunday, even as he goes to church with his family and joins them for a big meal.

"It becomes something I need to do and I do it out of respect for others," he said.

To restore the Resurrection and the Easter story to its appropriate place, Rivett said, the church should "build" toward it throughout the year -- place it in its context within the whole biblical saga.

"It is another story about Jesus, another piece of the whole Bible, but at the same time it is such a significant piece," he said. "Neglecting it completely would be wrong, but over-saturation is wrong, too. It is hard to find a balance."

Retired Episcopal Bishop John Shelby Spong, best known for his famously liberal interpretation of Christianity, does not adhere to Rivett's literal view of the Resurrection. His 1995 book, Resurrection: Myth or Reality?, caused a dust-up when it asked, "Does Christianity fall unless a supernatural miracle can be established?"

For Spong, 82, the answer is an emphatic no.

"I don't think the Resurrection has anything to do with physical resuscitation," he said. "I think it means the life of Jesus was raised back into the life of God, not into the life of this world, and that it was out of this that his presence" -- not his body -- "was manifested to certain witnesses."

Like Rivett, he too thinks the Resurrection must be placed in context to be interpreted and understood -- something he tried to do as a young priest in the Bible Belt through yearlong Bible study classes culminating in the Easter story, he said.

"I tried to help people get out of that literalism," he said. "But you don't do it in a single sermon. You need time to lay the groundwork and for people to process it, ask questions. You have to begin to build it."

Spong's Bible studies were enormously popular, attracting 300 people to each session, he said. His congregations grew as a result.

A Christian, Spong said, is one who accepts the reality of God without the requirement of a literal belief in miracles.

"What the Resurrection says is that Jesus breaks every human limit, including the limit of death, and by walking in his path you can catch a glimpse of that," he said. "And I think that's a pretty good message."