Hope, concrete realities the focus at gathering of African theologians 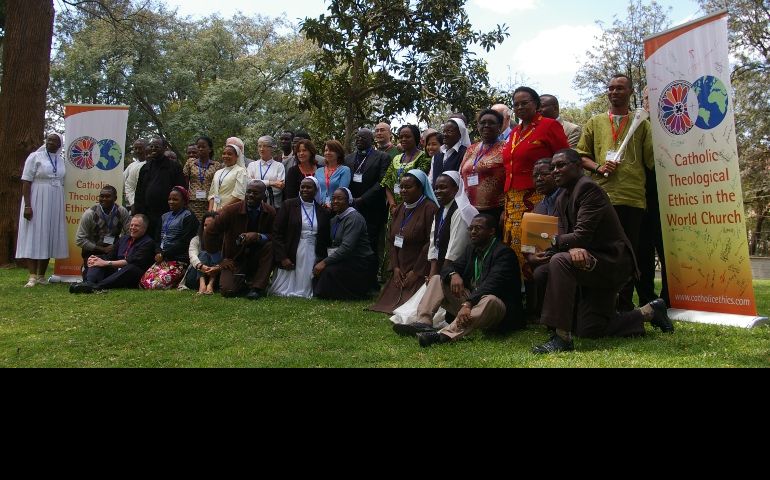 Those assembled for the Catholic Theological Ethics in the World Church gathering in Nairobi pose for a group shot Aug. 22. (NCR photo/Joshua J. McElwee)

NAIROBI, Kenya -- Bring up the subject of Africa at dinner conversation and you may feel like you've removed the air from the room.

By any measure, the problems facing the world's second-largest continent loom large. There's an HIV/AIDS crisis that touches the majority of its 57 countries, ongoing violent conflicts that tear at national identities, and perennial questions of development, hunger and health.

In big and small ways, each of those problems was in focus during a theological conference here in late August. But the key message of the event, the first to bring together a wide range of Africans -- lay, religious, clergy and bishops -- engaged in theological ethics, was much more hopeful.

In broad strokes, said the 35 Africans gathered here from 15 countries during the Aug. 21-23 event: We're here, we're engaged and we're addressing the problems before us.

Summing up the tone, Jesuit Fr. Victor Adangba, a key presenter at the event and the president of the Ivory Coast's Jesuit School of Theology, put the feeling of the Africans this way: "We are not outdone by the difficulties facing us. There is a lot we are doing."

The conference, which was hosted by a global network of scholars called Catholic Theological Ethics in the World Church, was described as a way to engage the Synod of African Bishops that was held in Rome in 2009.

The conference also followed a larger gathering hosted by the theological ethics group in Trent, Italy, in 2010, which saw for the first time some 600 Catholic ethicists assemble from around the globe to discuss the future of their discipline (NCR, Sept. 3, 2010).

The 2009 synod, which resulted in the papal exhortation Africae Munus, was noted at the time for its focus less on high theological concepts and more on the concrete realities of the continent, as highlighted by its theme: "The Church in Africa in Service to Reconciliation, Justice, and Peace."

At the Nairobi event, held at Hekima College, the city's Jesuit School of Theology, Africans addressed each of the synod's three individual focuses. In separate sessions dedicated to each focus, they centered on a wide range of experience -- including the perspectives of a survivor of the 1994 Rwandan genocide, the use of reconciliation rituals found in native African religions, and the status of women in the church and wider culture.

Capping each of the three sessions were presentations by three African bishops known for their efforts to confront violence in their respective geographical areas (see sidebar).

Adangba -- whose 3,000-mile journey east from the Republic of Côte d'Ivoire to Kenya for the event was representative of several of the participants' treks -- gave one of its three plenary presentations, focused on his reflections on the 2009 synod's discussions of peace.

Discussing the violence that erupted in his country in 2011 following a disputed presidential election, which saw some 2,000 civilians killed in skirmishes that are said to have displaced a million people, Adangba, president of the Institut de Théologie de la Compagnie de Jésus in Abidjan, said the key problem that has plagued his country is the "rejection of the other as different from the self."

To address that rejection, Adangba said, the church throughout the continent needs to develop a theoretical framework of hospitality, expressing "the sacramental bond that binds us together and spurs us to reconciliation and peace."

One of four respondents to Adangba's presentation was Dominican Sr. Alison Munro, the director of the AIDS office of the Southern African Catholic Bishops' Conference, which works with dozens of aid projects to coordinate a response to the pandemic in South Africa, Swaziland and Botswana.

A focus of Munro's remarks was on the particular burden women carry in the ongoing HIV/AIDS pandemic. In South Africa, which has some 17 percent of the world's total known cases of infection with the disease, Munro said, women infected outnumber men by nearly two to one.

Further, violence against women in her country, Munro said, "has reached epidemic proportions." Key to fighting its continuation, she said, is recognizing the forms of symbolic violence that also occur against women, sometimes in the home as a "normal daily occurrence."

"We are called to denounce both individual and systemic wrongs that diminish and violate the elderly, women and children," Munro told the assembled. "Our call as Christians committed to peace must surely begin in our homes, families and neighborhoods to have an effect on the wider society and the world."

A focus on the status of and violence against women on the continent permeated many of the conference's discussions.

Noting that Pope Benedict XVI's exhortation Africae Munus said the church "has the duty to contribute to the recognition and the liberation of women," Sr. Anne Arabome, a member of the international order of the Sisters of Social Service and a native Nigerian who is now a visiting scholar at Northwestern University in Illinois, said the "authentic proclamation" of that virtue "hinges on" giving women opportunities to:

Of the 35 participants in the event, 15 were women, due partly to a program sponsored by the theological ethics network to find funding for seven native African women to pursue doctorates at African Catholic universities.

Explaining the program at a session during the gathering, Jesuit Fr. James Keenan, the chair of the ethics network, said he sees the program "as a way of changing the face of theology on the continent."

"If this program succeeds, we are looking at the future of theological research, scholarship and writing on the continent of Africa," said Keenan, who holds the Founders Professorship in Theology at Boston College and is noted for his work on HIV/AIDS ethics. "And that's the face. Right here, right now."

Keenan's theology network is now planning a number of other regional gatherings of theologians, the next planned for Bangalore, India, in 2015.

They're also gathering contributors for a continuing series of volumes on current strains of thought in Catholic theological ethics. The first in the series, edited by Keenan, was published last December and collected some of the talks from the Trent conference. The next, due in 2013, is to focus on feminism.