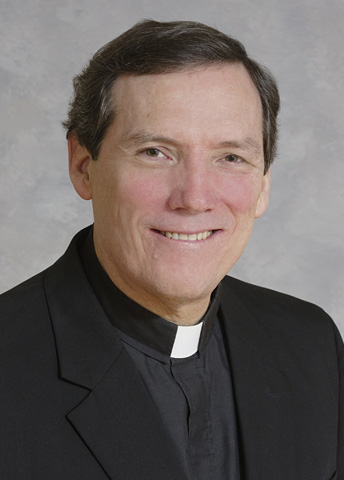 Jesuit Fr. Peter Ryan, a member of the Maryland Province of the Society of Jesus, in 2012 (CNS/Don Casper, courtesy Kenrick-Glennon Seminary)

The U.S. bishops' conference has named a Jesuit known for conventional views on marriage and sexuality as its new doctrinal watchdog, replacing a key staffer behind several controversial criticisms of theologians in recent years.

Fr. Peter Ryan will become executive director of the bishops' secretariat of doctrine and canonical affairs in August, the conference announced Wednesday.

The appointment, which comes as the bishops' conference prepares a change in its top leadership in the fall, may be a sign of what stance the bishops will take toward those who hold more progressive viewpoints under the new pontificate of Pope Francis.

Ryan, a member of his order's Maryland province, had been director of spiritual formation at the St. Louis archdiocese's Kenrick-Glennon Seminary. He will replace Capuchin Fr. Thomas Weinandy at the doctrinal office.

The secretariat, which carries out the work of the nine prelates of the U.S. bishops' doctrine committee, is known for carefully watching over the work of Catholic theologians in its task of upholding church teaching.

Ryan attracted media attention for also upholding that teaching in 2011, when the Vatican ordered an article he wrote with fellow theologian Germain Grisez defending the prohibition of divorce and remarriage to appear in a leading English-language theological journal without undergoing normal peer review procedures.

The article, which appeared in the June 2011 issue of the Jesuit-published quarterly Theological Studies, rebutted a September 2004 article in which two other theologians argued for a change in church teachings on the matter.

In publishing Ryan and Grisez's rebuttal, the journal's editor in chief, Fr. David G. Schultenover, added an explanation for some editorial policy shifts at the publication, writing it would now alert readers when articles do not "conform to current, authoritative church teaching."

Weinandy has served as director of the bishops' secretariat since 2005. During his tenure, the bishops' committee has issued public rebukes of five prominent U.S. theologians.

Those rebukes have been the subject of criticisms, including from both of the primary membership societies of U.S. theologians, because they came without pursuing consultation or dialogue with the theologians.

Ryan did not immediately respond to NCR's requests for comment Wednesday on his appointment.

Walsh said Ryan, who has served since 1998 as a senior fellow at The Westchester Institute for Ethics & the Human Person, a think tank that publishes on bioethical issues, also will assist the bishops' subcommittee on health care issues. Walsh said the bishops wanted someone with background in health care because "those issues are getting bigger and bigger."

When asked if the members of the search committee were looking for someone to improve relations between the bishops and theologians, Walsh said she did not know what was discussed in the committee's meetings.

Ryan, who also serves as a professor of moral theology at Kenrick-Glennon, holds a doctorate from the Pontifical Gregorian University in Rome and has other degrees from Jesuit-affiliated Regis College in Toronto, Gonzaga University in Washington state, and Loyola College in Maryland.

He has also served for the past seven years as a member of the board of the Fellowship of Catholic Scholars, a membership group for theologians founded in 1977. That group describes its founding purpose as to "redirect the Catholic scholarly community towards a more friendly approach to the teaching authority of the Church."

The Cardinal Newman Society, a non-profit organization known for keeping watch over Catholic institutions of higher education for strict adherence to church teaching, issued a statement following news of Ryan's appointment saying the priest had been a former board member of the organization.

Upon news of Weinandy's pending retirement in January, Susan Ross, the president of the 1,400-member Catholic Theological Society of America (CTSA), said then she characterized Weinandy's time at the bishops' conference as antagonistic.

"The committee on doctrine has taken a much more adversarial position towards theologians during the time of [Weinandy's] tenure," said Ross, who also serves as chair of the department of theology at Loyola University of Chicago.

Richard Gaillardetz, CTSA's president-elect, said Wednesday that "the welfare of the church depends on a healthy relationship of collaboration and mutual respect between the bishops' conference and theologians."

Mentioning Pope Francis' prayer intention for June, Gaillardetz, who is also the Joseph Professor of Catholic Systematic Theology at Jesuit-run Boston College, said he hoped Ryan and "all parties will keep in mind the ecclesial implications" of the intention, which is "that a culture of dialogue, listening and mutual respect may prevail among peoples."

Sandra Yocum, the president of the some 900-member College Theology Society, said Wednesday she hoped Ryan would bring a "spirit of conversation and mutual listening among the societies and the bishops."

Before serving at the Kenrick-Glennon Seminary, Ryan was a professor of moral theology at Mount St. Mary's Seminary, Emmitsburg, Md.

Writing along with Grisez in response to NCR's report on their article in Theological Studies in 2011, Ryan said the journal had "submitt[ed] to higher authority" in publishing their piece but also said the authors had done a "great deal of work" to respond to criticisms by a group of reviewers assigned by the journal.

Original proposals from the journal to shorten their article, Ryan wrote, would have excised key points of rebuttal to the 2004 authors.

Among theologians criticized during Weinandy's tenure at the bishops' conference was St. Joseph Sr. Elizabeth Johnson, a noted professor at Jesuit-run Fordham University who the bishops critiqued in 2011 for her 2007 book Quest for the Living God: Mapping Frontiers in the Theology of God.

Johnson has repeatedly said the committee misrepresented her work and lamented that her attempts to meet with members of the committee to discuss the book were rebuffed.

Following the committee's critique of Johnson, both the CTSA and the CTS issued statements criticizing the move. The CTS statement, released in December 2011, said the committee had caused a "fundamental breach" in the call for dialogue in the church and had wounded the "entire community of Catholic theologians."

The Johnson critique came from the bishops' committee under the leadership of Washington, D.C., Cardinal Donald Wuerl. He was replaced as head of the committee by St. Paul-Minneapolis Archbishop John Nienstedt at the annual U.S. bishops' meeting in November.

Weinandy told NCR at the time that the bishops had not engaged Johnson in dialogue before issuing the critique and had set aside guidelines approved by the bishops' conference in 1989 for such investigations.

Terrence Tilley, the theology department chair at Fordham, said Wednesday he most hoped Ryan would follow the guidelines set out in that document when investigating theologians.

"I would hope for more interactions with theologians being investigated in the spirit of the [document]," said Tilley, who is also Fordham's Avery Cardinal Dulles professor of Catholic theology. "I think that would be the concrete thing I would look for, increased dialogue."

The first chance for the theologians and their new ecclesiastical overseer to evaluate chances of dialogue will likely come in November, when the leaders of several of the theological societies typically meet with members of the bishops' doctrinal secretariat and committee over dinner during the annual bishops' meeting.

The same U.S. bishops' meeting will also be the last for New York Cardinal Timothy Dolan in his role as president of the conference, as he is expected to step down after three years in the position.