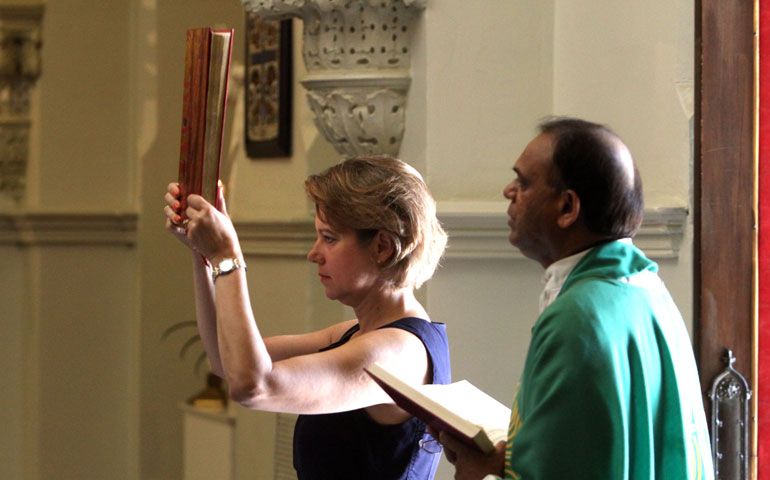 Recent declarations from the Vatican followed by assenting decrees from a number of bishops make it clear that Roman Catholic hierarchs will not entertain questions about ordaining women priests.

They've underscored their decrees with excommunications, notably Maryknoll Fr. Roy Bourgeois and the women who have been ordained as part of the Roman Catholic Womenpriests movement.

While priestly ordination is seemingly off the table and out of bounds, what is emerging is a fairly open discussion about ordaining women to the permanent diaconate.

In a recent interview with NCR, Carolyn Johnson, who taught permanent deacons and their wives in the Brooklyn, N.Y., diocese in the mid-1990s, recalled how she was often asked why women weren't allowed to earn credit for the courses they took alongside their husbands and how she felt about preparing men for a role she couldn't assume herself.

It wasn't until later in life she realized "that the question of women deacons was actually a critical one that had been under study in the International Theological Commission for 20 years," said Johnson, an adjunct professor at Felician College in Lodi, N.J.

According to Phyllis Zagano, co-author of Women Deacons: Past, Present, Future, "There is nothing new about the church in its wisdom addressing the question of women in ministry. The conversation has never stopped."

"The Holy Spirit is in charge of helping the official church listen to its promptings," said Zagano, a senior research associate-in-residence at Hofstra University, Long Island, N.Y. Zagano writes a biweekly column for NCRonline.org.

On Aug. 21, the Chicago Tribune reported on St. Nicholas Parish and a conversation parishioners there have had about women deacons since 2010. Fr. Bill Tkachuk became a part of this unexpected conversation once questions and confusion around the diaconate arose within his parish.

Parishioner Lynne Mapes-Riordan, along with other members of the church, pursued a parish-wide conversation with Tkachuk's support. This conversation stemmed from her own personal call to the diaconate once she learned that women deacons remained an open question within the church.

Mapes-Riordan and Tkachuk, along with other parishioners, met with Chicago Cardinal Francis George and engaged in an open discussion with him in September 2011.

The Tribune reported that in a recent interview George had said the idea of women deacons "is being talked about very slowly," yet unlike the priesthood, "the diaconate remains an open question" for women.

Many people don't understand that this is even up for discussion, Tkachuk explained to NCR. He recalled a woman coming up to him after a meeting, asking, "You mean, we can be talking about this?" and he told her, "Of course, you can. It's an unanswered question in the church."

Although George hasn't exactly confirmed what the Tribune reported, he hasn't disavowed it either. Responding to an NCR query about his stance on women as deacons, George replied through a spokeswoman: "I am in favor of increasing the visible leadership of women in the church; they are already leaders, but not always visibly so."

Since the conversation began in his own parish, Tkachuk has received many phone calls from other parishes around the U.S., inquiring how they can begin their own conversations around women deacons.

In "Why Not Women?" (America, Oct. 1), Wcela wrote about why the addition of women to the diaconate would make sense historically and what the role of deacons looked like prior to the Second Vatican Council (1962-65).

Since then, married men as deacons have become a norm and play a critical role within parish life, said Alesandro, the expert in canon law who was featured in Newsday.

Alesandro told NCR that there is now an understanding that the diaconate is different and plays a completely separate role from the priesthood.

This idea was reinforced in 2009 when Pope Benedict XVI altered the Code of Canon Law, specifically Canon 1009, to make an important distinction between the priesthood and the diaconate. The canon reads, "Those who are ordained in the episcopate or presbyterate [priesthood] receive the mission and faculty of acting in the person of Christ the Head. Deacons, however, receive the power of serving the People of God in the ministries [diakonia] of the liturgy, the word, and charity."

With this fairly new understanding, Wcela stated, that "iconic maleness is not a requirement for [deacons]," only bishops and priests represent "Christ the Head."

Benedict's amending canon law provides an example of how canon law is subject to change, Alesandro told NCR. "Just because it is in canon law, does not mean it is fixed forever. There are lots of things that change."

Although Canon 1024 states that "a baptized male alone receives sacred ordination validly," it could be subject to change, especially after thorough theological and doctrinal investigation, Alesandro said.

The canon doesn't make clear what a person is ordained to, he continued.

"If you say we are talking about priests and bishops then there is a whole set of documents that have come out from the pope and the Congregation of the Doctrine of Faith and other theologians saying it has to be limited to a male priesthood," he said.

But it seems the diaconate is a different matter.

Once women deacons are looked at as a separate question from women becoming priests, a new conversation can begin, he explained.

"We've had permanent married deacons for over 50 years and you don't see a storm on the chancery offices saying, 'Now ordain us to the priesthood.' It's two different vocations," said William Ditewig, professor and co-author of Women Deacons: Past, Present, Future.

Women becoming deacons is a distinct question, one that deserves to be addressed on its own merit, Ditewig told NCR.

"Restoring women deacons could allow the Catholic church to address the steadily enlarging rift between the institution and the faithful," said Johnson, who delivered an academic paper on the topic at the 10th anniversary celebration of Voice of the Faithful.

She continued, "Indeed, the Unitatis Redintegratio, 4, from the Second Vatican Council states, 'Wherever necessary, undertake with vigor the tasks of renewal and reform.' "