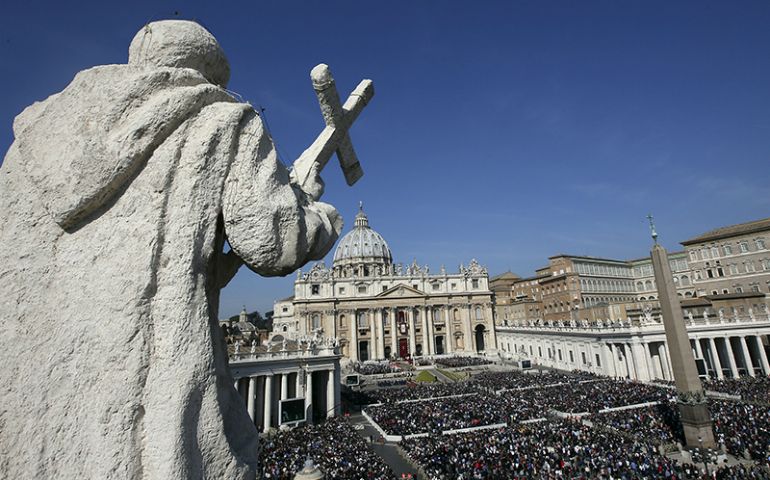 A general view is seen of Pope Francis leading the Easter Mass in St. Peter’s Square at the Vatican on March 27, 2016. (Reuters/Alessandro Bianchi)

Paris — Holding a colloquium to discuss dethroning an erring Roman Catholic pontiff sounds like a call to battle at a time when prominent cardinals say Pope Francis is leading the faithful astray.

Its title, “The Deposition of a Heretical Pope,” added a provocative touch after a rare challenge by four cardinals who last September urged Francis to clarify parts of Amoris Laetitia (The Joy of Love), a papal document they said wrongly opened the door to allowing divorced and remarried Catholics to receive the Eucharist.

So when plans for a conference were reported a few weeks ago, it created quite a buzz on the far right of the Catholic blogosphere.

As the original U.S. report was picked up and translated around Europe, it looked as if the two-day meeting in Paris could be the place where the next steps in the campaign against the pope were being worked out.

It turned out to be nothing of the sort.

The colloquium at the Law and Religious Societies center of the Université Paris-Sud brought together about 40 experts — mostly canon lawyers and legal historians — to discuss issues highlighted in a recent 1,200-page book on the issue by Laurent Fonbaustier, a professor of public law at the university.

Apart from two Dominicans in white robes and two priests in black cassocks with the wide waist sashes favored by traditionalists, the crowd seemed to be mostly lay academics.

Speakers on March 30 and 31 went back to the New Testament and church crises down through the centuries looking for any legal precedents that might show possible ways to square the circle of papal authority.

The pope is the supreme authority in the Catholic Church but can be judged if he deviates from the faith. There is no agreement on who could be that judge.

After two days of discussions at the center in a southern Paris suburb, law professor Cyrille Dounot told the concluding session it was impossible to find a solution to the problem in the church’s long legal tradition.

“We’ve asked a question but we can’t answer it,” said Dounot, one of the three organizers of the colloquium. “Maybe we will be able in the future, but that’s improbable.”

Building an actual legal case against Francis was never the point of the meeting anyway, he told RNS. “This is just an academic examination of a disputed question.”

Boris Bernabé, a professor of legal history and the main organizer, expressed surprise at how much attention the small colloquium had raised. Participants knew about the dispute between the conservative cardinals and the pope, but that bore no relation to their debate.

The colloquium was called to discuss Fonbaustier’s book, he insisted: “This is the way we show off the work of a member of our faculty.”

“Our goal was not to imagine in any way — eventual or possible or totally hypothetically — a procedure for deposing a pope,” he said. “No way.”

After explaining that he wrote his thesis in the 1990s but only published it recently, Fonbaustier went even further in distancing the colloquium from any efforts to unseat the present pope.

“I’m not a believer, but I am extremely interested in these religious issues (in legal history),” he explained. “I have no religious attachment whatsoever.”

He did not want his work to be exploited by anyone else. “Of course, in the current context, I understand how it could be read. But it would be very serious if a university let itself be censored because of that,” he said.

Ultraconservative Catholic websites have discussed the fate of a heretical pope since Amoris Laetitia was issued last year.

One website reported last November that a 1975 Brazilian study about deposing a heretical pope was “making the rounds in the Vatican” and “being studied attentively by theologians and prelates in Rome.”

After Francis did not respond to the call to explain his views, the four cardinals — including an American based in Rome, Cardinal Raymond Burke — released the text of their appeal. Burke also gave an interview saying the pope would automatically lose his office if he professed a heresy.

In December, another group of 23 Catholic scholars and cleric issued a letter saying the church was now “drifting perilously like a ship without a rudder, and indeed, shows symptoms of incipient disintegration.” They urged the four cardinals to issue a so-called fraternal correction.

The original report by the ultraconservative website Church Militant presented the colloquium in the context of this debate.

It also called the conference location significant because “it was in the 1300s that the University of Paris explored the question of the possibly heretical Pope John XXII.” His disputed views were declared heretical and Pope John withdrew them on his deathbed the following year.

Massimo Faggioli, a professor of church history at Villanova University, said the Catholic Church had such a long and checkered history of canon law that it was impossible to find a clear precedent for saying a pope was or was not legitimate.

“The talk about Pope Francis not being really Catholic began soon after his election,” Faggioli told RNS.

“Many people could not believe that we passed within just a few weeks from a German theologian pope to a Latin American Jesuit,” he said. “They’re trying to translate this shock into a biblical or canonical argument.”

Theology | Paris conference on deposing a heretical pope looks to the past, not the present