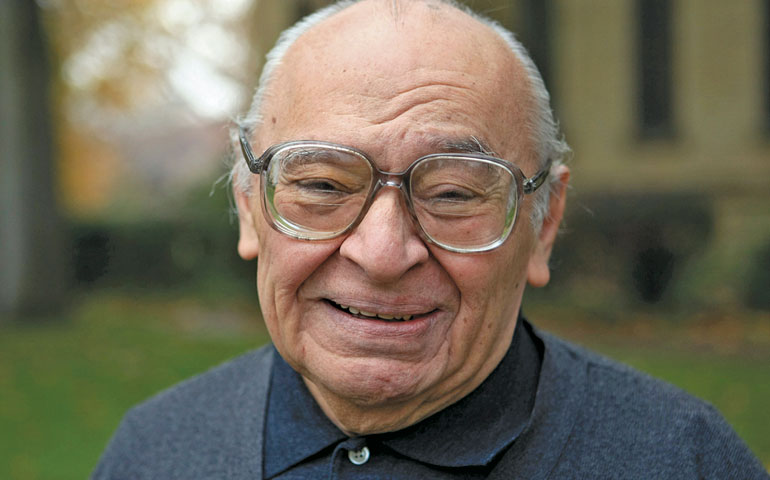 Some observers of the Catholic theological scene are saying that a personal meeting between Pope Francis and Dominican Fr. Gustavo Gutiérrez could mark a thaw in decades of frosty relations between the church's hierarchy and liberation theologians.

Gutiérrez, a Peruvian, coined the phrase "liberation theology." The theology is marked by its concern for liberation of the world's people from unjust economic or social conditions. It was developed in Latin America during the region's military dictatorships in the 1960s and '70s.

The Vatican did not list Francis' early September meeting with Gutiérrez among the pope's official audiences, but a Vatican spokesman confirmed the meeting to NCR, describing it as "a strictly private visit."

L'Osservatore Romano, the Vatican's semi-official newspaper, published an essay on the event Sept. 3. With the election of the first pope from Latin America, liberation theology can no longer "remain in the shadows to which it has been relegated for some years, at least in Europe," the essay said.

A U.S. theologian with a personal connection to Gutiérrez agreed that the election of the Argentine pope may have brought a certain openness to liberation theology.

According to Michael Lee, associate professor of theology at Fordham University in New York, the reality of the Latin American experience "is present in the person of Francis and in the Vatican now in a way that it never has been before."

"What only makes sense is, then, a reopening of the door to this theology that emerged from that context and spoke so powerfully to it, and continues to do so," said Lee, who is of Puerto Rican descent and was a graduate assistant for and taught with Gutiérrez.

Cardinal Joseph Ratzinger, as head of the Vatican's Congregation for the Doctrine of the Faith 1981-2005 before becoming Pope Benedict XVI, issued official critiques of liberation theology in 1984 and 1986. He expressed particular concern that some theologians had inappropriately mixed Marxist critique of the global economic system with Catholic theology.

While Gutiérrez was never officially sanctioned by Ratzinger, other theologians who followed the Peruvian's strain of thought, like Brazilian Leonardo Boff and Sri Lankan Tissa Balasuriya, were.

The visit between the theologian and Francis came the same week Gutiérrez held a public event with Archbishop Gerhard Müller, the current head of the Vatican's doctrinal congregation. The two were in the northern Italian town of Mantua, launching a book they co-authored.

Titled On the Side of the Poor: Liberation Theology, Theology of the Church, the book is an Italian edition of a book they wrote in German in 2004.

Benedict appointed Müller, formerly the bishop of Regensburg, Germany, to head the doctrinal congregation in 2012.

In On the Side of the Poor, Müller describes liberation theology as one of the "most significant currents of Catholic theology of the 20th century" that helped the church bridge the divide between "earthly happiness and ultra-earthly salvation."

During the book launching in Mantua, Müller also announced that the Vatican doctrinal office has given the green light to proceed with the sainthood cause of Archbishop Oscar Romero, a hero to many U.S. and Latin American Catholics. Romero was assassinated in 1980 after condemning violence by the military dictatorship in El Salvador.

Lee, who is also president of the Academy of Catholic Hispanic Theologians of the United States, said that announcement goes "hand in hand" with whatever thaw might be taking place in Catholic theology.

"It's a recognition that liberation theology and the kind of Christian action it inspired and that fed it is something very valuable and something our world needs today," he said.

Seconding Lee's idea is Paul Farmer, the U.S. physician and Harvard professor known widely for humanitarian health care work in some to the world's poorest countries.

Farmer, who is Catholic and says liberation theology inspired him, said he hopes that Francis' meeting with Gutiérrez does mean an easing in the Vatican's stance toward liberation theology, because that would allow the theology to spread more widely.

In particular, he said, he hopes that agencies, nonprofit groups, and governments that provide assistance to the world's most impoverished people would adopt Gutiérrez's ideas about a "preferential option for the poor" and his work on issues of structural violence.

Those groups "need this kind of inspiration," Farmer told NCR.

"They need to understand that it's wrong not to use these ideas," he said. "That if you don't understand structural violence, for example, you're grasping around in the dark in public health, public education [and] poverty reduction. These ideas really warrant not just rehabilitation but widespread dissemination."

Farmer, who is the Kolokotrones University Professor at Harvard University, is also a co-founder of the nonprofit group Partners in Health, which has received numerous awards for its work connecting doctors and patients in the developed and developing worlds.

Farmer too has co-authored a book with Gutiérrez. Titled In the Company of the Poor, it is set for release by Orbis Books in November.

Farmer said that he became aware of Gutiérrez's writings while working as a physician in Haiti some three decades ago.

When he and several colleagues -- including the current president of the World Bank, Korean-American physician Jim Yong Kim -- started Partners in Health in 1987, he said, they "extremely explicitly" borrowed from liberation theology.

The group's website (www.pih.org) states: "Our mission is to provide a preferential option for the poor in health care."

"These ideas should be all around us and available to everyone," Farmer said.

A version of this story appeared in the Sept 27-Oct 10, 2013 print issue under the headline: Pope meets with liberation theology pioneer.