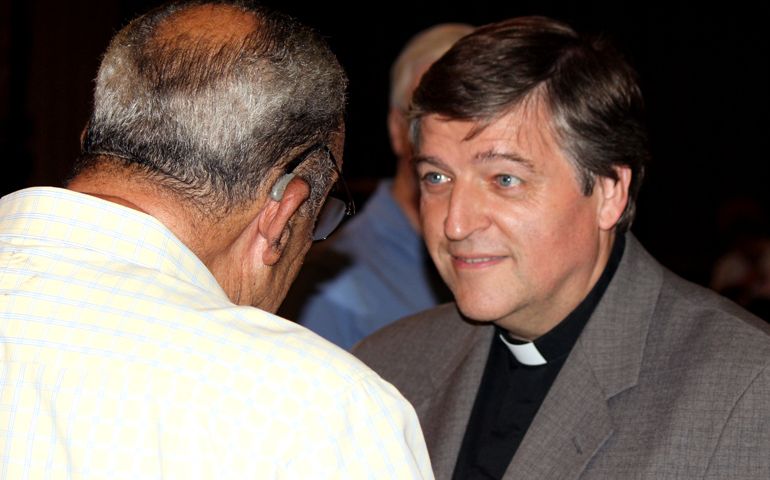 Los Angeles — It was 7:15 p.m. Friday. Seats in the dimly lit auditorium adjacent to the Westminster Presbyterian Church in Pasadena, Calif., were beginning to fill. More than 200 Catholics from the Los Angeles area had gathered to hear the presentation by Austrian priest Fr. Helmut Schüller, who is calling upon Catholics to defy church hierarchy.

As a leader in a worldwide reform movement, Schüller has spent the last two and a half weeks meeting congregations in cities throughout the United States as part of his "Catholic Tipping Point" tour. Sponsored by 10 Catholic organizations, each presentation details the intentions behind the "Call to Disobedience," a document published by the Austrian Priests' Initiative.

The lights flickered, signaling that the event was about to begin, and as people began to quiet, Fr. Kevin Steen, a local priest and host of the event, took the microphone. The evening began with a prayer, followed by prayers for intercession led by members from the congregation. Each petition outlined the objectives the reformers in attendance hoped would be addressed.

"Celebrating the beauty of God's image in lesbian, gay, bisexual and transgender people -- we pray," a woman quietly said into the microphone. "Lord, hear our prayer," the congregation answered.

"Longing for the day when, like St. Mary of Magdala, women can proclaim the Gospel from our pulpits -- we pray." "Lord, hear our prayer."

"Aching for Eucharist to be celebrated as nourishment for sinners, not reward for good behavior -- we pray." "Lord, hear our prayer."

The petitions reflected many of the reforms outlined in the Austrian priests' appeal, showing that those gathered for this presentation were prepared for what Schüller came to say. The "tipping point" this tour was named for refers to the decline in the number of priests and the structural challenges that result, but the tour was intended to discuss deeper issues as well.

Schüller, who once served as vicar general of Vienna and was head of a group investigating abuse allegations in the archdiocese of Vienna, advocates changes he said he believes will solve problems, including: opening the priesthood for women and married men; allowing divorced and remarried people to receive Eucharist; and empowering laypeople to play a greater role in governing community churches.

"The bishops tell us we should pray for vocations," he said after a brief introduction. "But I can say God has fulfilled this prayer."

Schüller has a thick Austrian accent, piercing blue eyes and a casual, amiable style he uses to carry his audience through humorous anecdotes and serious censures of church structure.

Despite this view, Schüller began his reform movement by trying to use the accepted avenues for change within the hierarchy. He spoke of his attempts to start dialogues with bishops and cardinals and the letter he and other members of the Austrian Priests' Initiative wrote to former Pope Benedict XVI.

"Modern CEOs prefer to see only one paper sheet," he said, adding, "They have no time to read so much stuff." The crowd laughed.

The letter did not produce the desired response, but the priests secured a meeting with Archbishop Luis Ladaria Ferrer, secretary of the Congregation for the Doctrine of the Faith, with the pope's approval. During this meeting, Schüller said he realized a major obstacle to the reform movement.

After discussing the desired changes for more than an hour, Ferrer said they did not defy church doctrine. It was, however, a young priest sitting at his side who condemned what they were seeking.

"And then we realized one very important reality in the Roman Catholic church," Schüller said. "This church is run more and more by priests of two or three movements."

"The Legionaries of Christ," he continued, "and Opus Dei."

People gasped and the crowd stirred.

"That means the correspondents, the creation of the documents, the decisions with the contacts with the prefects of the congregations are at these movements," Schüller said.

The Legionaries of Christ and Opus Dei are conservative orders that have been accused of abuses and overly harsh recruiting methods. Schüller shared a story about a cardinal who said he felt bullied by the young priests from these congregations and said, "I want only to inform you what is really going on. The church is more and more led by relatively young priests of these movements, who nobody knows really."

It is still unclear how obstacles to reform efforts will be addressed, but Schüller said steps are being taken -- or at least being discussed. Priests from around the world will meet in October in Austria to plan the next steps in the movement.

"We are gathering the ideas and the inputs and we have started to think over how can this cooperation continue," he said in an interview after the presentation. "We have no concrete steps at the moment, but we want to reflect very carefully. Soon we will realize the potential for this cooperation and how we can speak out internationally and on which level."

The slow-moving nature of reform was a question brought up by attendees of the Los Angeles presentation who cited the absence of youth in the movement as a cause for concern. Schüller said some young people do not have patience for discussion and are looking for action while others are dismayed by the way Catholicism is developing.

Jan Honoreu said she has experienced that in her own family.

"My son [went to] Catholic school all the way through Georgetown and goes to church, but he is one of the ones who is not waiting," she said. "I am going to wait, but we only have one foot in the traditional church and we are called to action. We see the traditional but we have our hearts in the future. I don't want the church to go down any more, and I don't want us to lose any more people, but what are we getting from the leadership?"

Other comments that arose during the discussion centered on LGBT rights, empowering women to take greater roles within the church, and questions about how to address a hierarchy controlled by conservative movements. Schüller said these comments from community members will be considered when making priorities about next steps.

Until official steps are taken, however, he encouraged audience members to take action in their communities. He asked them to talk to their bishops about the problems in the church and insisted they forget their humility and emphasize their competence. Throughout his presentation, Schüller emphasized the importance of language in faith, prayer and power dynamics in the church. He reminded the attendees that they are not laypeople, but citizens of the church, and must continue to do their part to change the institution.

[Gabrielle Canon is a freelance writer based in Los Angeles.]