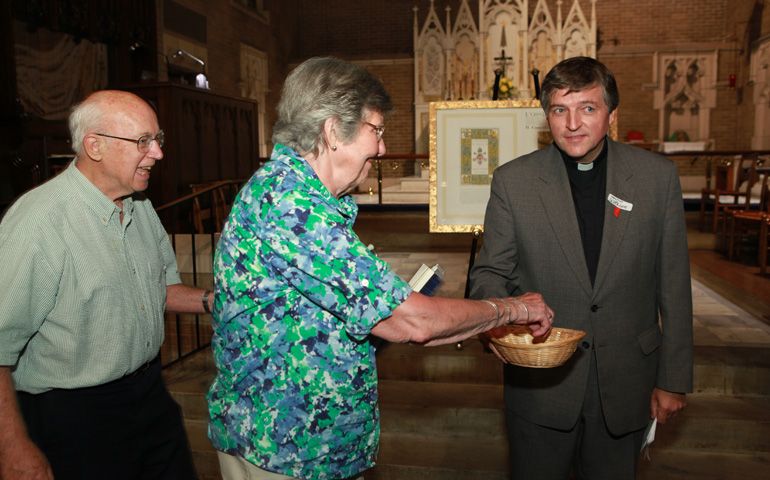 New York — Fr. Helmut Schüller's "Catholic Tipping Point" tour of the United States ended where it began: in New York. He gave an address Wednesday evening in Manhasset and on Thursday, he visited St. Patrick's Cathedral in Manhattan, where he delivered thousands of red ribbons and signatures he collected in 15 cities across the nation.

The original plan was to give the ribbons, which symbolize Pentecost, to New York Cardinal Timothy Dolan, but no one from the archdiocese was there to accept them. Instead, it was agreed the ribbons would be delivered to the front desk of the chancery, wrote St. Joseph Sr. Chris Schenk, executive director of FutureChurch, in an email.

"I discovered many faithful Catholics working hard to change the church they love very much," Schüller said at St. Patrick's, according to a statement from FutureChurch, one of the tour's organizing groups. "I also spoke with many priests who see the need for change but are afraid to raise their voices. There is no place for fear or intimidation in the Catholic church. We all must speak out for our rights as Catholics."

In the last three weeks, Schüller traveled from the East Coast to the West, spreading a message of "disobedience" and church reform. In each city, Schüller preached the values of the "Call to Disobedience," a 2011 document published by the Austrian Priests' Initiative. His message includes opening the priesthood to women and married people. He also advocates for a stronger relationship between the church and Catholic gay couples.

Even before Schüller stepped foot in the United States, U.S. bishops tried to block him, he said, confirming that Boston Cardinal Sean O'Malley and Dolan contacted Cardinal Christoph Schönborn, his bishop in Vienna, to prevent the tour.

"They phoned [Schönborn] to try and stop me from coming," Schüller told NCR. O'Malley and Dolan were concerned the tour would "cause trouble," he said.

The reaction by U.S. bishops is nothing new for the Austrian priest. "I was not surprised. It's familiar. I had heard it in Germany from the bishops there," Schüller said.

Schüller was formally banned from speaking on Catholic property in Boston, Detroit and Chicago, and the archbishop of Philadelphia, Charles Chaput, said Schüller could not speak on archdiocesan property in the city. But the Sisters of St. Joseph welcomed Schüller to the Catholic venue of Chestnut Hill College, a move Chaput later said was "regrettable."

In his final speaking event Wednesday in Manhasset, Schüller used his experience in the United States to make his case for reform. In the United States, he said, "priests are totally reliant on the bishops for their livelihood. These are the methods of a dictatorship." Making his point, he said in Detroit, priests were forbidden to meet with him in their own homes.

Schüller said the church functions in a "top-to-bottom obedience" and said communities at the "base of the church" are ignored. Calling this structure "difficult for the priests and unhealthy for the church," Schüller pushed for "disobedience" to challenge it.

"Obedience in dictatorship is a dangerous thing," he said. He insisted this is not a call to be disobedient against religion, but against authority. "Obedience is misunderstood and misused by the governors of the church," he said, adding, we need to realize "we are daily silently disobedient."

This "top-to-bottom obedience" is evident even in the sacraments, Schüller said. Because "official sinners" are turned away from Communion, he said, "the Eucharist has become a symbol of exclusion." To erase this "symbol," divorced and remarried Catholics should be allowed to receive the Eucharist, he said.

Furthermore, the church's stance on gay relationships presents another challenge for parishes across the world, Schüller said, saying the church should be welcoming on this issue rather than exclusionary. The church should "concentrate on the quality of this partnership: fidelity, respect," he said, rather than focus on whether it is a homosexual or heterosexual relationship.

After his presentation, audience members were invited to ask Schüller questions. When asked what role the laity should play in the reform movement, he became particularly excited. An audience member asked if the laity should "step back rather than step forward" and leave it up to priests. Schüller said no: The laity must "not step back" but instead should "speak out and stand together."

In addition, Schüller said, actions by lay Catholics must extend beyond words. He urged lay Catholics serious about reform to withhold money from the church.

"The power of the bishops is standing on your money and your silence," he told the crowd.

He also talked about some of the lessons he learned on his tour of the United States.

First, he said he is encouraged by the reaction he received from his audiences and the actions of the groups that sponsored his trip. He said he and the crowds across the country were in "quick agreement after two or three sentences. We had a Pentecostal experience."

He said he was also impressed with the organization of Catholic reform movements in the United States, praising "splendid cooperation" among the groups, "sometimes without knowing one another."

In an interview after his presentation, Schüller expanded on the reaction he received from his audience. He again praised the Sisters of St. Joseph of Philadelphia for their "bravery" and reiterated the positive response from the people who attended his talks.

"There's a deep-rooted consensus about the needs for reform," Schüller told NCR.

Even so, he added, support for this reform splits along generational lines.

"It's only this Second Vatican Council generation" who attended his talks in the United States, he said. "Young people don't have the patience for this. So they're sitting here for their daughters and sons."

[Ben Feuerherd is a freelance writer based in New York.]

Theology | Schüller wraps up US tour: 'We all must speak out'

As we experience the love of God, we begin to appreciate the trinity

Are married priests next on Pope Francis' reform agenda?

Coronavirus, social distancing and the company of the faith