United Methodists to hold special session on LGBTQ inclusion in 2019 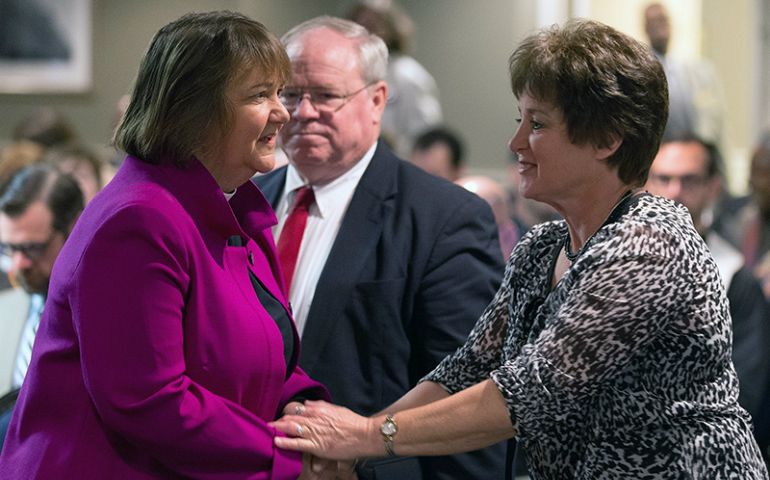 Bishop Karen Oliveto, left, greets Dixie Brewster ahead of the opening of oral arguments before the United Methodist Judicial Council meeting on April 25, 2017, in Newark, N.J. At rear is the Rev. Keith Boyette, representing Brewster before the council. (UMNS/Mike DuBose)

The bishops of the United Methodist Church have called for a special session of its General Conference to settle questions of LGBTQ inclusion that have vexed the global denomination for years.

The call came April 25, the same day the denomination’s highest court held a hearing on whether an openly gay pastor can serve as bishop.

The General Conference, the United Methodist Church’s top legislative body, typically meets every four years. At last year’s meeting in Portland, Oregon, it voted to defer all decisions about human sexuality to a specially appointed commission and left the door open for a special session.

“As a delegate to the last General Conference, I am glad we will finally have time to address the issues we put off in 2016,” said John Lomperis, United Methodist director of the Institute on Religion & Democracy, a group that describes itself as a voice for “Christian orthodoxy.”

It’s possible delegates could put off decision-making, much like they had at the 2016 General Conference, Lomperis added, citing “the very powerful forces of institutional inertia.” But he said he remained hopeful.

The Commission on a Way Forward — 32 members appointed by bishops who represent different countries and interpretations of the role of LGBT people in the church — since has met three times.

Matt Berryman, a member of the commission, called the special session “an anticipated and appropriate final summons to the church — to get its head out of the sand and to faithfully engage reality instead of pandering to fear-based scriptural interpretation.”

Berryman also is executive director of the Reconciling Ministries Network, a network of United Methodist congregations and other groups supporting inclusion.

The commission’s work has been “very pragmatic,” he said, acknowledging disagreement over LGBTQ inclusion in the church and discussing how to keep the second-largest Protestant denomination in the United States from splitting, if possible.

In the meantime, many of the denomination’s smaller jurisdictional and annual conferences in the United States have made their own decisions regarding LGBTQ clergy.

“The United Methodist Church has these biblical standards on sexual morality for our ordained clergy, and the question is: Do regional bodies have the right to set their own standards, or do they have to follow the whole denominationwide standards?” Lomperis said.

“On paper, everybody had to follow the same standards. That’s what our rules say fairly explicitly. But de facto there have been regions that have been trying to live according to a different reality.”

The Judicial Council is considering several of those decisions and is expected to rule on them as early as Friday. Most notable is the question, discussed Tuesday during an open hearing, of whether the election of an openly gay or lesbian bishop is lawful under the denomination’s Book of Discipline.

According to the Book of Discipline, “The practice of homosexuality is incompatible with Christian teaching,” meaning “self-avowed practicing homosexuals” cannot be ordained as ministers or appointed to serve.

“It’s a critical moment in terms of the longer story, which the General Conference of 2019 is a part of,” Berryman said.

“This is a major way station along the way. It doesn’t affect that the commission still has its work to do. It doesn’t change that, but it does sort of place the church in a different position with regard to LGBT inclusion depending on what the outcome is.”

The Rev. Karen Oliveto, a married lesbian, became the United Methodist Church’s first openly LGBTQ bishop in July when she was consecrated as bishop of the Mountain Sky Area, which includes churches in Colorado, Utah, Wyoming and Montana, as well as one church in Idaho.

Her election is noted along with the motion for a declaratory decision from the Judicial Council, and she attended Tuesday’s hearing with all but one of the bishops in the Western Jurisdiction of the United Methodist Church, she said. She noted there are a few churches in her area struggling with her appointment and said she is committed to creating a place for all views.

And, Oliveto said, “If my mail is any indication, I really believe the people in the pews, at least in the United States, have moved beyond this, and our polity has not caught up.”

Pope: Present in the Eucharist, Jesus transforms those who receive him