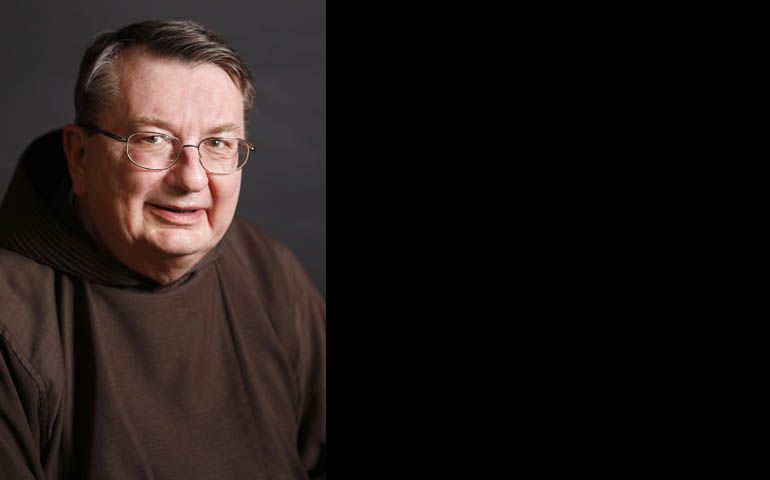 The U.S. bishops' staffer behind several controversial criticisms of Catholic theologians in recent years is stepping down.

Capuchin Fr. Thomas Weinandy, head of the bishops' office tasked with upholding church teaching, is to leave his post as executive director for the bishops' Secretariat of Doctrine in August. Mercy Sr. Mary Ann Walsh, director of media relations for the U.S. bishops' conference, confirmed the departure Wednesday.

Weinandy has led the secretariat, which carries out the work of the nine prelates who are members of the U.S. bishops' doctrine committee, since 2005.

During his tenure, the bishops' committee has issued public rebukes of five prominent U.S. theologians. Those rebukes have been the subject of wide criticisms -- including from both of the primary membership societies of U.S. theologians -- because they came without pursuing consultation or dialogue with the theologians.

The 900-member College Theology Society even issued a statement in December 2011, saying the doctrine committee had caused a "fundamental breach" in the call for dialogue in the church and had wounded the "entire community of Catholic theologians."

Weinandy did not respond to a request for comment Wednesday.

Theologians rebuked by the bishops' committee since 2005 include:

Susan Ross, the president of the 1,400-member Catholic Theological Society of America, said she characterizes Weinandy's time at the bishops' conference as antagonistic.

"The committee on doctrine has taken a much more adversarial position towards theologians during the time of [Weinandy's] tenure as executive secretary," said Ross, who also serves as chair of the department of theology at Loyola University of Chicago.

"The whole climate of debate in society -- political and theological -- has also become much more adversarial," Ross said. "But he's certainly played a role in that at the conference."

Several other prominent theologians asked for comment on Weinandy's time at the bishops' conference said they had no comment. Two cited a maxim about not speaking when you do not have kind words to say.

Walsh said priests normally leave the conference after working there for a number of years and that "it's a pretty natural transition" for Weinandy to depart.

"There probably hasn't been any" discussion among the U.S. bishops about the criticisms the doctrine committee had come under during the staffer's tenure, said Walsh.

In 2011, the doctrine committee came under sustained criticism after it published a harsh rebuke of Johnson's 2007 book Quest for the Living God: Mapping Frontiers in the Theology of God.

Issuing a 21-page statement in March 2011, the committee said the book is marred by "misrepresentations, ambiguities and errors" and "completely undermines the Gospel and the faith of those who believe in the Gospel."

Weinandy told NCR at the time that the bishops had not engaged Johnson in dialogue before issuing the critique and had set aside guidelines approved by the bishops' conference in 1989 for such investigations.

Johnson has repeatedly said the committee misrepresented her work and lamented that her attempts to meet with members of the committee to discuss the book were rebuffed.

Walsh said potential successors for Weinandy will need "certain basic requirements," including having a doctorate in theology, "recent scholarly publication, pastoral experience, [and] experience of teaching at a seminary or at a graduate theological level."

The job description for the post, said Walsh, partly reads: "The executive director is a Roman Catholic priest in full communion with the church."

Weinandy, 67, holds a doctorate in historical theology from King's College in London. Before joining the bishops' conference, he held academic positions at several U.S. institutions and was a professor of theology at Oxford University.

Among his other duties at the conference, Weinandy is responsible for parsing statements and documents from offices throughout the bishops' conference for theological implications and for coordinating the work of the bishops' doctrine committee with the bishops' other committees.

Weinandy was also responsible for organizing a symposium of younger theologians in October 2011 in Washington, D.C, that saw 54 theologians discuss relations with bishops and Pope Benedict XVI's effort for a "new evangelization."

He also participated in seven years of talks with the leaders of a number of Protestant denominations regarding reciprocal recognition of baptismal rites with the Catholic church, which resulted in the signing of a public agreement on the matter Tuesday.

Weinandy, who is a member of the Catholic Theological Society of America (CTSA), is known for publicly disagreeing with many of its other members and leaders.

Weinandy's frustration at the CTSA bubbled up at the association's annual meeting in St. Louis in June, when he was heard disagreeing aloud with certain presenters while sitting in the audience during sessions.

Weinandy is also known for exhibiting a certain blunt, dry humor in personal communication. In one instance, when this writer introduced himself to Weinandy at the CTSA meeting, Weinandy cited several of NCR's editorial positions before asking, "Why do you work for the devil?"

Following criticism from the theological societies regarding its handling of the Johnson matter, the bishops' doctrine committee quietly formalized procedures for theological investigations that eschew dialogue with theologians in favor of an in-house review process.

The protocols, which are dated April 2011 but first came to light last summer, state that while theologians being investigated by the committee "may be invited to respond to the Committee's observations in writing," the committee "reserves the right" to publish criticism without consultation.

Ross said she hoped whoever is chosen to replace Weinandy at the secretariat will foster cooperation with U.S. theologians.

"Bishops and theologians have different roles in the magisterium," she said. "And I feel sometimes that we are seen less as cooperating with each other in the different ways that we fulfill our roles as part of the teaching magisterium.

Walsh said working with theologians is "something that the bishops look forward to."

"They've made it clear that they want to work with the theologians," Walsh said. "Theologians are obviously a very significant body of people in our church."

Asked if Weinandy's successor would need to reach out to the College Theology Society and the Catholic Theological Society of America following their criticisms of the bishops' doctrine committee since 2005, Walsh said: "I think it's important to work with those societies."

"In fact," she said, "that's one of the responsibilities of the job, working with those societies."

[Joshua J. McElwee is an NCR staffer. His email address is jmcelwee@ncronline.org.]

Theology | US bishops to replace staffer behind theological investigations

Communion of saints, an important tenet of our faith, can help during coronavirus times