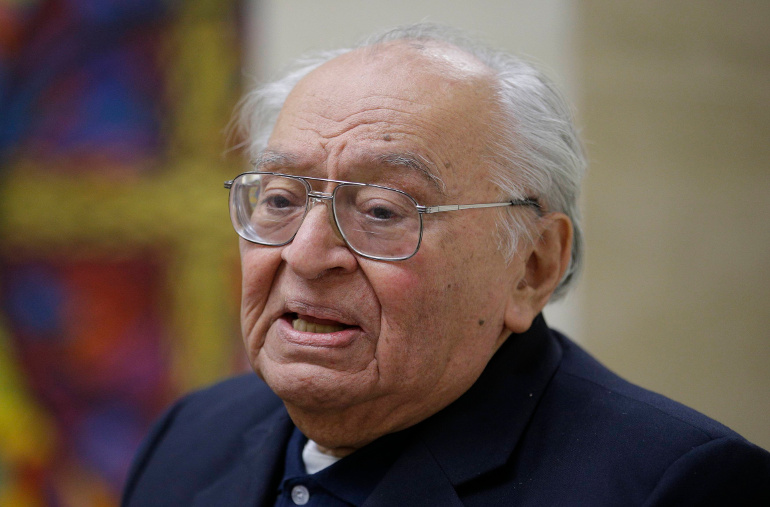 Dominican Fr. Gustavo Gutierrez, an 85-year-old Peruvian theologian, speaks during a news conference to unveil the book "Poor For The Poor: The Mission Of The Church" by German Cardinal Gerhard Muller, doctrinal congregation prefect, in Rome Feb. 25. (CNS/Reuters/Max Rossi)

For decades, many liberation theologians globally have lived with a looming possibility: One day, a letter could arrive from the Vatican contesting their work, even calling it heretical or anti-Christian.

Mounting a defense could take years, with long, confidential letters sent back and forth to the Vatican's powerful Congregation for the Doctrine of the Faith. For lay people, non-compliance could mean losing university tenure. For priests, brothers, and sisters, it could mean an order of silence or even removal from your religious order.

But in a unique turn of events, the theologian credited with founding the sometimes-controversial liberation theology movement was invited to speak at the Vatican Tuesday by none other than the current leader of its doctrinal office, Cardinal Gerhard Müller.

Dominican Fr. Gustavo Gutierrez was a surprise guest and speaker during a book launch for a new book by the cardinal, titled Poor for the Poor: The Mission of the Church. The book, which has a preface from Pope Francis, also has two chapters written by the theologian and is largely focused on explaining — sometimes even defending — liberation theology.

In interviews with press Tuesday before the event, Müller wholeheartedly backed liberation theology, saying it "is based on a theology of the word and is not a human ideology."

"This theology is not an ideology," he continued. "It is based on a real theology, based on the word of God. Through his word we can be saved. Only God and his words can save mankind."

It is an odd shift for the subset of the theological field, which focuses on Jesus Christ's role in redeeming humanity not only from sin but also from unjust political, social, or economic conditions.

Gutierrez, a native Peruvian who published A Theology of Liberation in 1971, was one of many liberation theologians under investigation by the doctrine office when it was under the leadership of Cardinal Joseph Ratzinger, the future Pope Benedict XVI.

In several public statements, Pope John Paul II said Marxism unduly influenced the work of Gutierrez and others — at one point in 1979 even saying their work "does not tally with the Church's catechisms."

Speaking in interviews following the event, Gutierrez said he thought Raztinger "understood" liberation theology and helped explain its concepts to John Paul II. Benedict, the theologian said, even played a key role in organizing a seminal meeting of the Latin American bishops that discussed the subject in Aparecida, Brazil, in 2007.

"Ratzinger understood us," said Gutierrez. Referring to Benedict's remarks in Aparecida — in which the pontiff spoke of the preferential option for the poor — the theologian said his speech "shows that this is strictly connected to faith in Christ, which means it is at the center."

"I think that Aparecida mostly happened thanks to Ratzinger," he said.

Müller said he first met Gutierrez in a 1988 visit to Peru. Together, the cardinal said, they spoke about liberation theology and how the situation for Catholics across Latin America was "quite different" that for those across Europe.

"We all belong to the universal church," he said. "It's really important to share experiences and learn of the different biographies that exist within the church."

"We are part of a single family which is in the church and this is why we must share experiences and work together," he said. "This is the divine vocation that all are called to be sons and daughters of God."

Gutierrez, 85, spoke at the event for about 20-minutes in Italian mixed with Spanish words, reflecting on the parable of the Good Samaritan, saying the story reflected the need of the church in our time to go outside of itself, to make neighbors, and to always be at the service of the poor. (The full text of his talk is available here.)

Referencing Pope Francis' recent apostolic exhortation Evangelii Gaudium ("The joy of the Gospel"), Gutierrez said the church needed to move "outside of itself" to make neighbors and serve the poor.

"There's a big temptation to remain in one place but this is not the need, what the Gospel expects from us," he said. "A Samaritan church is an open church, a church attentive to human needs."

Also speaking at the event Tuesday were Vatican spokesman Jesuit Fr. Federico Lombardi and Honduran Cardinal Oscar Maradiaga Rodriguez, the archbishop of Tegucigalpa and the leader of the Latin American episcopal conference from 1995-99.

After the event, Gutierrez said he did not know whether he would have acted in any different way when he was under investigation by the Vatican.

The person who says life repeats, said Gutierrez, is a "lazy person."

"Life never repeats, ever," he stated. "It's changing constantly and this new change is great."

Mentioning the Cold War but not Pope John Paul II by name, he continues: "The Cold War was specific moment in time. And there was a pope for that time that allowed us to go beyond that."

Asked if he had more problems explaining himself to John Paul II or Ratzinger, the theologian responded: "I honestly can say that Ratzinger's understanding helped us."

"Because being a theologian he knew what it was about from the beginning," said Gutierrez. "He knew it was never connected to Marxism. He was aware that Marxism had nothing to do with what liberation theology stated."

"The dialogue with him was easier than with Wojtyla [John Paul II]," he said.