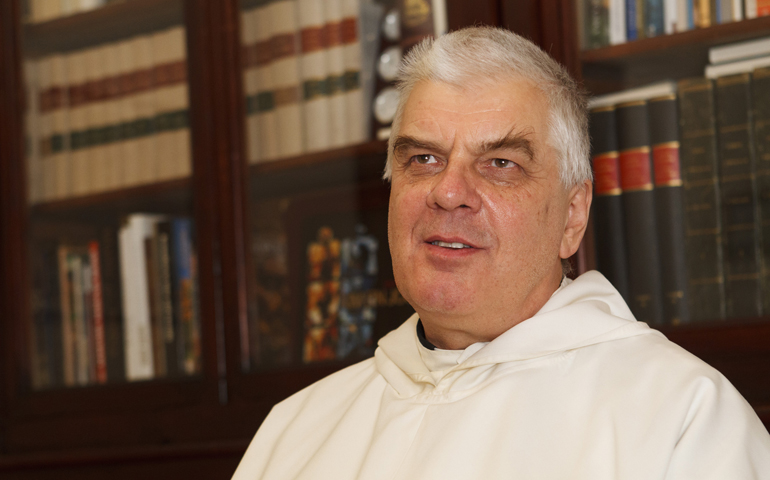 Fr. Wojciech Giertych, Pope Benedict XVI's personal theologian, is pictured in December at his residence in the Apostolic Palace at the Vatican. Father Giertych said though women cannot be ordained priests, they do not play a secondary role in the church. (CNS/Paul Haring)

In October, the Congregation for the Doctrine of the Faith dismissed Roy Bourgeois from the priesthood because of his participation in the invalid ordination of a woman.

Since then, a Jesuit in Wisconsin has had his priestly faculties suspended after he celebrated a liturgy with a woman purporting to be a Catholic priest, and the Redemptorist order has confirmed that one of its members is under Vatican investigation for alleged ambiguities "regarding fundamental areas of Catholic doctrine," apparently including the question of women's ordination.

The Catechism of the Catholic Church states that only men can receive holy orders because Jesus chose men as his apostles, and the "apostles did the same when they chose collaborators to succeed them in their ministry." Blessed John Paul II wrote in 1994 that this teaching is definitive and not open to debate among Catholics.

Yet some Catholics persist in asking why, as traditional distinctions between the sexes break down in many areas of society, the Catholic clergy must remain an exclusively male vocation, and what this suggests about the church's understanding of women's worth and dignity.

Few are as well qualified to answer such questions as Dominican Fr. Wojciech Giertych.

As the theologian of the papal household, Giertych has the task of reviewing all speeches and texts submitted to Pope Benedict XVI to ensure they are free of doctrinal error. Although his office was not founded until the 13th century, the Dominican claims St. Paul the Apostle, who corrected St. Peter on important questions of church teaching, as his original forerunner. (A copy of Rembrandt's portrait of St. Paul in prison hangs on a wall in Giertych's apartment in the Apostolic Palace.)

Giertych rejects the idea that the all-male priesthood is a relic of obsolete social norms, as if such norms could have been binding on Jesus.

"Christ was courageous with respect to the local social customs, he was not afraid to be countercultural," Giertych said. "He didn't follow the expectations of the powerful, of Pilate, of Herod. He had his own work, his own mission."

According to Giertych, theologians cannot say why Jesus chose only men as his Apostles any more than they can explain the purposes of the incarnation or the Eucharist.

"In the mystery of faith, we need to be on our knees toward something that we received," he said.

Nevertheless, he said, theology can help illuminate the "internal coherence and beauty of the mystery which has been offered to us by God."

"The son of God became flesh, but became flesh not as sexless humanity but as a male," Giertych said; and since a priest is supposed to serve as an image of Christ, his maleness is essential to that role.

Reflecting on differences between the sexes, Giertych suggested other reasons men are especially suited to the priesthood.

Men are more likely to think of God in terms of philosophical definitions and logical syllogisms, he said, a quality valuable for fulfilling a priest's duty to transmit church teaching.

Although the social and administrative aspects of church life are hardly off-limits to women, Giertych said priests love the church in a characteristically "male way" when they show concern "about structures, about the buildings of the church, about the roof of the church which is leaking, about the bishops' conference, about the concordat between the church and the state."

Giertych acknowledged that a Catholic woman might sincerely believe she is called to the priesthood, but said such a "subjective" belief does not indicate the objective existence of a vocation.

None of which means women hold an inferior place in the church, he said.

Women are better able than men to perceive the "proximity of God" and enter into a relationship with him, Giertych said, pointing to the privileged role played by women in the New Testament.

"Women have a special access to the heart of Jesus," he said, "in a very vivid way of approaching him, of touching him, of praying with him, of pouring ointment on his head, of kissing his feet."

"So women don't need the priesthood," he said, "because their mission is so beautiful in the church anyway."

This special relationship, the theologian said, is essentially related to Jesus' maleness.

"I remember once a contemplative nun told me, 'Oh, wouldn't it be horrible if Jesus were a woman?' And it dawned on me that, for a woman, the access to Jesus in prayer is easier than for us men, because he's male," Giertych said. "The relationship of love, of attachment, the spousal relationship to Christ is easier for the woman."