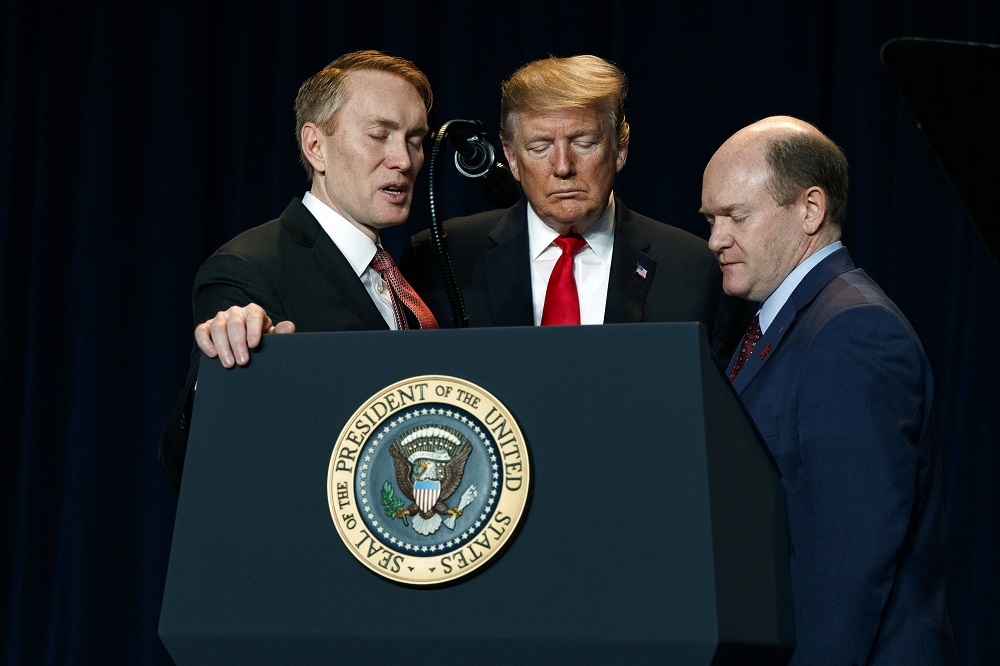 President Donald Trump began his remarks at the National Prayer Breakfast by renewing his commitment to the religious conservatives who helped lift him into office.

“I will never let you down, I can say that — never,” Trump said as he approached the podium on Thursday morning (Feb. 7), speaking to a gathering of religious leaders, political figures and more than a few evangelical Christians.

The event was organized by Sen. Chris Coons, D-Del., and Sen. James Lankford, R-Okla., who currently co-chair both the national breakfast and the weekly Senate prayer breakfast on Capitol Hill.

Lankford cited 1 Timothy while introducing the president, noting a passage that encourages the faithful to pray for those in authority.

“From the earliest days — 2,000 years ago — Paul was writing to them and saying, ‘Don’t forget to pray for your leaders,’” Lankford said.

Trump made numerous references to his State of the Union address from earlier in the week and celebrated that people gathered at the breakfast were “united by a shared belief in the glory of God and the power of prayer.”

He then painted an image of American history in which religion played a crucial role.

“Since the founding of our nation, many of our greatest strides, from gaining our independence to the abolition of civil rights (sic) to extending the vote of women, have been led by people of faith and started in prayer,” he said. “When we open our hearts to faith, we fill our hearts with love.”

Trump lifted a line directly from his State of the Union address when highlighting his anti-abortion stance.

“All children, born and unborn, are made in the holy image of God,” he said, sparking one of the loudest applause lines of the morning.

During his remarks, Trump noted Muslims, Jews, Catholics and representatives of other faiths in the room. He also reminded the audience that his administration appointed Elan Carr this week as U.S. envoy to combat and monitor anti-Semitism, saying it was part of a broader effort to protect persecuted Christians and Jews.

Trump lifted up one major moment of bipartisanship at the event, by praising the celebrated recent passage of the First Step Act. Faith leaders, he said, "helped us achieve historic, bipartisan criminal justice reform.”

While some Democrats and progressive faith leaders argued the bill could have done more, it enjoyed robust support from evangelical leaders, including several of Trump’s faith advisers.

The prayer breakfast was mostly free of the partisan rancor that has divided Washington and most of the nation in recent years.

Rosen spoke briefly before Trump’s address, for instance, noting her role as a former synagogue president. She read from Isaiah 58, saying Jews read it on Yom Kippur.

“(It) describes the moment when the great prophet held ancient Israel accountable to the disparity between their values and their actions,” she said of the verse. “God’s vision of a society was one of justice and compassion; instead, theirs was a corrupt society that oppressed the most vulnerable.”

Coons explained to Religion News Service earlier this week that the conciliatory nature of the event was by design.

“The point of praying with the president or praying with other elected officials isn’t to berate them about our policy or political differences but rather to try and be present with someone else in a spirit of prayer,” he said. “Those of us who have been involved in organizing it have tried very hard to avoid making it a platform for partisan political issues."

Curry, who achieved fame for his love-focused sermon at Prince Harry's royal wedding in 2018, read from 1 Corinthians 13 during the breakfast. He argued that while the passage is often used at weddings, it was originally penned out of concern for a community that had “divisions in itself,” and the biblical author wrote it to “show them the way.”

The verse emphasizes love as a form of humility, describing it as “not arrogant or rude” and “does not insist on its own way.”

When he finished the reading, Curry said, “Paul saw what Jesus meant when he said the whole law of God is summed up in these two (things): ‘to love God, and love your neighbor as yourself.’” 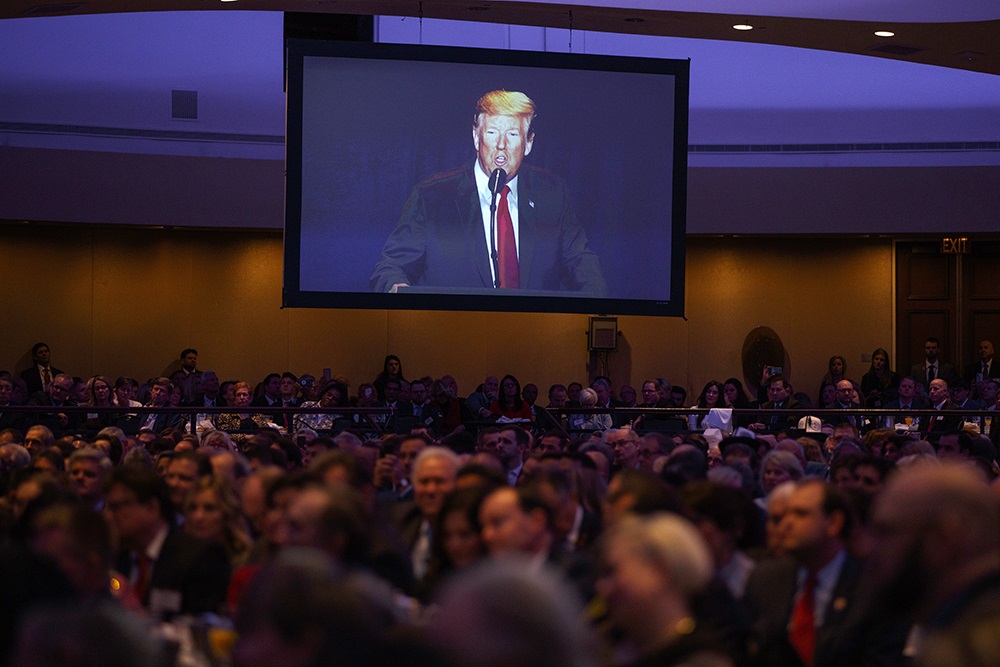 Anderson's prayer appeared to invoke elements of Christian nationalism, an ideology popular among some conservative Christians.

“At the founding of our nation, Lord, we received your blessing and your guidance through leaders who openly proclaimed your name,” she said.

Haugen’s keynote address focused on the issue of human trafficking and modern slavery, something Trump also touched on.

"Even in this divided era there is good that we all agree should be done to address criminal justice reform, the opioid crisis, a broken foster care system — and we should just do it,” Haugen said.

Among other guests at the event was Andrew Brunson, the Christian pastor who was jailed in Turkey for nearly two years before the Trump administration helped free him from captivity last fall.

The president appeared surprised to learn midspeech that Brunson’s daughter had an upcoming wedding and paused to ask if he was invited.

The National Prayer Breakfast has fallen under scrutiny over the past year after Maria Butina, a Russian national, was arrested in 2018 and pleaded guilty after officials accused her of attempting to exploit the event to influence Trump and American politics.

Lankford and Doug Burleigh, one of the leaders of the larger organization that plans the event and meetings that often occur alongside it, have generally responded to calls for increased security or vetting of attendees by insisting that the breakfast is a spiritual event that should be open and inviting.

“Not everyone walks into every prayer meeting with the same motivation,” Lankford told RNS in January.