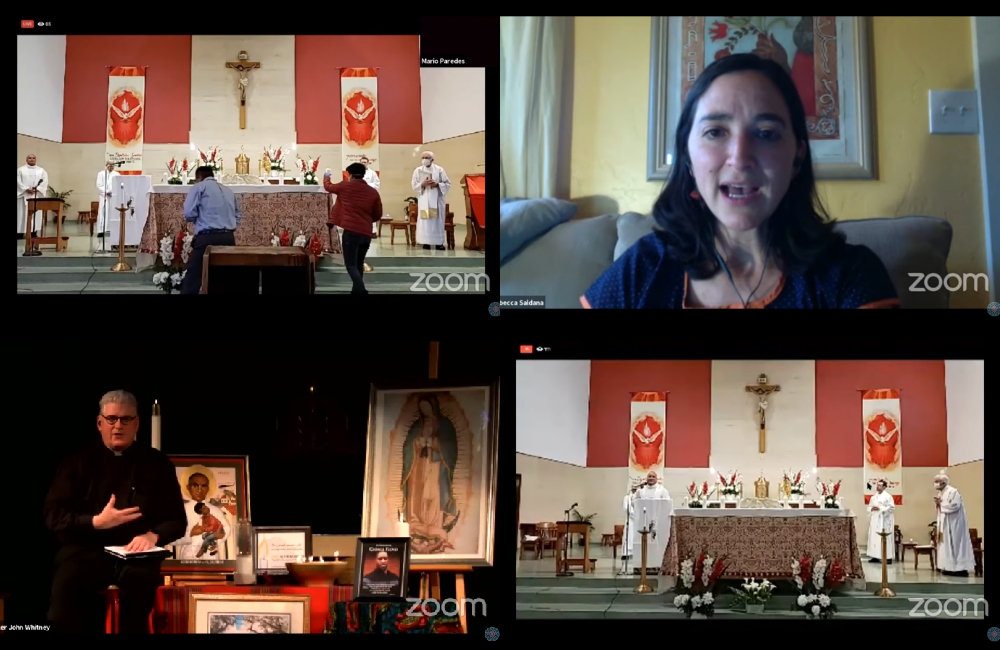 by Julie A. Ferraro

Hundreds of Catholics in Washington state found a new way to advocate for undocumented workers earlier this month.

The group gathered via social media on June 9 and 10 for a vigil sponsored by Jesuit ministries in Seattle, Tacoma and Spokane, and by local parishes, schools and universities. Participants came together for two hours both nights, joining in prayer, eucharistic adoration and hearing from organizations and elected officials about the need for a COVID-19 relief fund for undocumented workers in the state.

"It was a technological feat to pull this off virtually," said Vince Herberholt of St. Joseph Parish, Seattle, who helped organize the "Open All Hearts/Abre Todos Los Corazones" vigil.

Jesuit Fr. John Whitney, St. Joseph's pastor and former Jesuit West provincial, served as master of ceremonies for the vigil. "We've been very active and involved in this for quite a while," he said, referencing a banner outside the church that proclaimed, "We stand with immigrants."

The June 9 vigil incorporated Hispanic traditions, with hymns, the rosary and testimonies from undocumented workers.

"Coronavirus has taught us that we're all vulnerable, but we're not equally vulnerable," said Jesuit Fr. Elías Puentes, of St. Leo and Sacred Heart parishes in Tacoma, told those viewing through a combination of Zoom and YouTube.

On the second night, Washington State Sen. Rebecca Saldaña talked about her experiences before being elected to the legislature. She grew up Catholic, studied theology at the Jesuit-run Seattle University and served as a union organizer for farm workers.

"Back then, we needed immigration reform," Saldaña told the participants. "The federal government still refuses to take action."

That refusal makes all of us less safe, Saldaña said, as does criminalizing and excluding undocumented immigrants from obtaining public services. So many undocumented workers should be considered essential, Saldaña said, especially those in the agriculture industry.

"My one hope for COVID-19 is that they are recognized as essential workers, not sacrificial workers," she said.

Alvarado, who graduated in March with a bachelor's degree in civil engineering, lost his job because of the pandemic and now has no benefits, Sundborg said.

Sundborg praised Washington as a state doing a lot for undocumented immigrants, since it provides college grants and a legally obtained driver's license.

"We just want Washington to be consistent" in serving undocumented immigrants, Sundborg said, especially when so many, like Alvarado, are facing financial difficulties through no fault of their own.

The vigil grew from letters written to Gov. Jay Inslee and state legislators on April 20 by the Washington Immigrant Solidarity Network, co-signed by more than 400 organizations statewide, and another issued May 4 and signed by 19 Jesuit entities in the state. Both letters called for the creation of a fund that would aid undocumented workers.

"Those who are undocumented would be left behind, as they have been so many times before," Padilla said.

The network has received more than 20,000 calls since COVID-19 restrictions began, Padilla said.

Undocumented immigrants are seeking assistance with paying rent and looking for food security. They are concerned when, after reporting to state agencies worker safety violations regarding social distancing or conditions related to COVID-19, their employers ignore recommendations for taking corrective action, or retaliate against the employee, Padilla said. 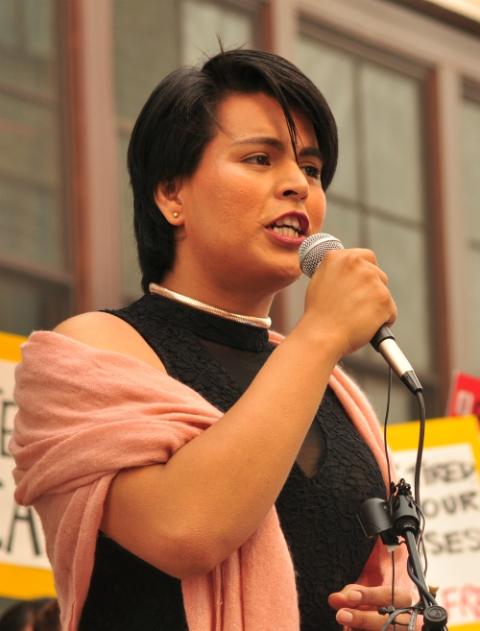 Being exposed or contracting COVID-19, then losing employment because they are not provided with sick time, leaves them without income to pay basic bills or keep a roof over their heads, Padilla said.

The Washington Immigrant Solidarity Network letter detailed how the state's 250,000 undocumented immigrants are completely excluded from the $2 trillion relief package Congress passed last month, despite broad consensus that providing economic stability to all workers is essential to ending this public health crisis.

Undocumented workers have been seriously impacted by the business closings in the wake of COVID-19, primarily landscaping, construction, hotels and restaurants.

The Jesuit letter noted that isolating undocumented immigrants may be a common political tool. "In a time of pandemic, when people are unable to return to their nation of origin, and when looming poverty and disease put at risk their lives, the lives of families, neighbors, and the whole community, we must rethink both the humanity and the practicality of our policies," the Jesuit letter said.

The results of inaction, as stated in the Washington Immigrant Solidarity Network letter, are dire. "Without state government intervention, hundreds of thousands of Washington residents are at risk of being exposed to coronavirus and becoming destitute."

Both letters requested Inslee's office create a fund with an initial allocation of $100 million, administered by community-based organizations to provide emergency assistance for undocumented immigrants.

The letters also recommended setting up a permanent system providing unemployment benefits to undocumented immigrants, who are excluded from receiving payments through the current unemployment insurance program.

"All communities need the resources to survive, not even thrive," Padilla said.

The governor's counterproposal would allow undocumented immigrants to be included in the Washington Disaster Cash Assistance Program, or DCAP.

The Washington Department of Social and Health Services website describes DCAP as a cash program available when there is a disaster or other specified states of emergency declared by the governor. It is available to families or individuals without children who face an emergency and don't have the money to meet their basic needs.

The maximum payment from DCAP is $363, according to Saldaña's website.

"It's an underfunded program that doesn't meet the need," Padilla said.

Herberholt described how DCAP had already exhausted its $12 million in funding for 2020, waiting to be replenished by incoming federal stimulus money the state hasn't yet received.

Saldaña acknowledged Inslee has shown openness to helping undocumented immigrants. But because the state collects no income tax and instead relies on sales tax, business taxes and other fees to cover programs, any program that uses federal funds in addition to state monies — like the unemployment insurance system — automatically excludes undocumented workers.

"We need to fix the system," Saldaña said. "I'm committed to working on that."

Undocumented workers also should get overtime pay, paid time off or sick time, especially given the prevalence of COVID-19 among Latino workers, said Saldaña. "It makes our whole system safer and healthy."

[Julie Ferraro is a freelance writer from Yelm, Washington.]