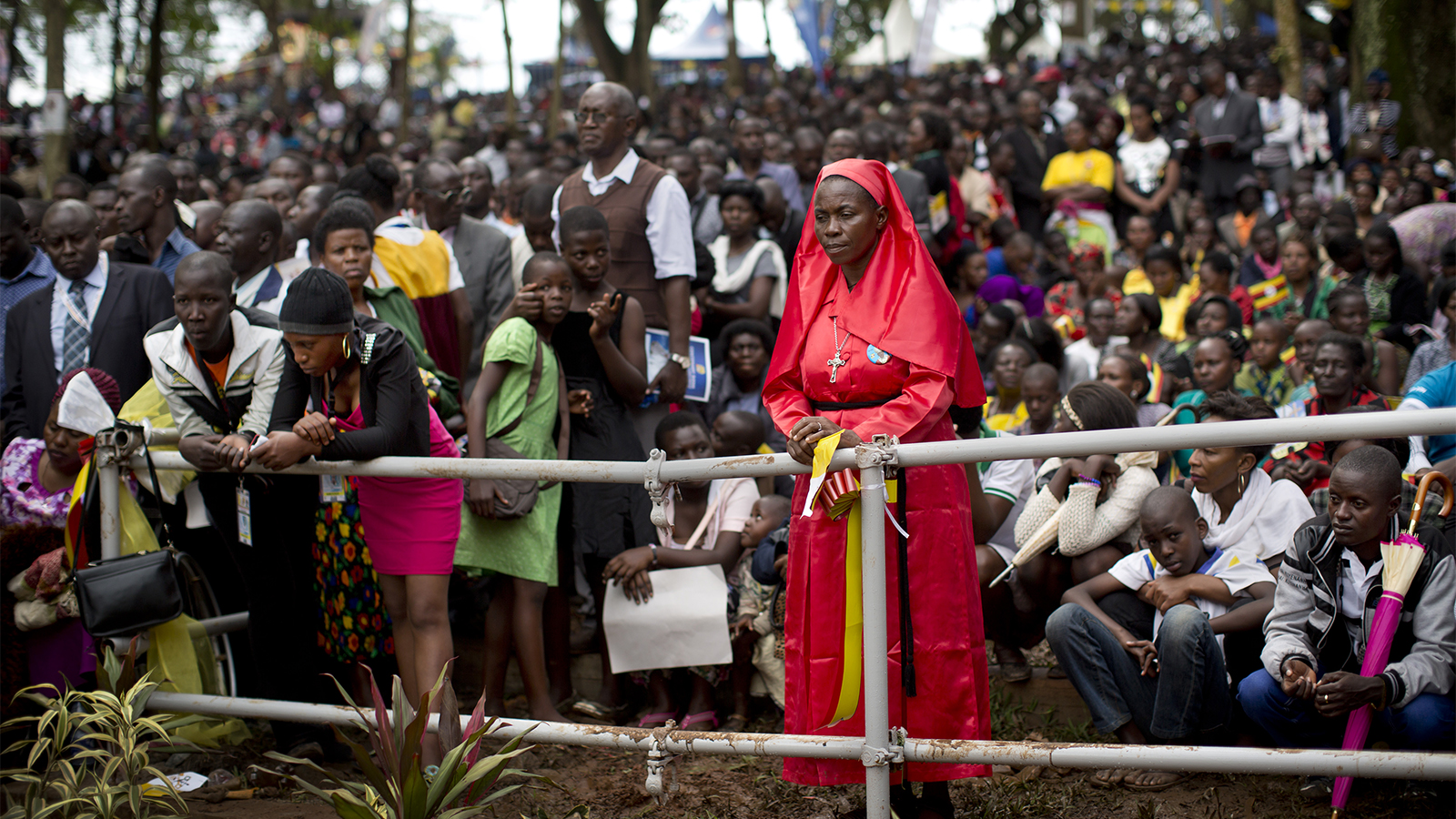 A nun reflects during a solemn moment as Pope Francis leads a Holy Mass for the Martyrs of Uganda at the area of the Catholic Sanctuary in the Namugongo area of Kampala, Uganda, on Nov. 28, 2015. (RNS/AP/Ben Curtis)

Thousands of Catholics in one of the world's poorest nations are objecting after the church asked the government to collect a 10 percent tithe from worshippers on its behalf.

A similar "church tax" in Germany has generated record revenue for the Catholic Church there, according to the German Handelsblatt newspaper — but the policy is also blamed for driving millions of people to leave the faith.

"Why should the church keep asking for money all the time?" asked John Mayanja, 46, a teacher at Kitante Primary School in the East African nation. "We are supposed to give tithe willfully and without any threats from our church leaders."

During an Oct. 28 Mass at Rubaga Cathedral in the capital city of Kampala, Archbishop Cyprian Kizito Lwanga urged the Ugandan government to immediately begin deducting a 10 percent tithe from the monthly salaries of all Catholic believers to ensure the church's work does not stop because of lack of funds.

Lwanga said many do not voluntarily give the church 10 percent of their incomes.

"We lie to God that we pay church tithe off our monthly salaries. But during a Mass like this, whenever we ask for tithe, everyone gives only what they have at that time," Lwanga said.

"The Bible says a tenth of whatever you earn belongs to the church, and you should give me support as I front this proposal because it is good for us."

Some Ugandan Christians questioned the church's motives, saying a church tax forces poor people to fund extravagant lifestyles for some priests and bishops.

"They should understand that we are paying fees for our children and servicing government loans. We have no money," Mayanja said.

More than a third of Uganda's nearly 43 million people live on less than $1.90 per day, the international marker of extreme poverty, according to World Bank. The Brookings Institution reports 3 in 10 households in Uganda spend more than 65 percent of their income on food.

Lwanga said he wants Catholics in Uganda to emulate their counterparts in Germany, where 8-9 percent of churchgoers' income is deducted and channeled to the respective faiths.

"The money is used to build and renovate their churches," said Lwanga, who also serves as chairperson of the ecumenical Uganda Joint Christian Council. "If an employee in Germany gets $10,000, the government deducts $1,000 and gives it to the church, and it is working very well."

The Catholic Church in Germany collected a record $7.1 billion last year in taxes, Handelsblatt reported, although more than 2.2 million Germans have formally deregistered from the church since 2000. Those who deregister are no longer subject to the church tax but can no longer participate in church life — an outcome Archbishop Georg Gänswein has called a "serious problem."

Several other European nations also collect religious taxes, which are sometimes voluntary, according to the Pew Research Center.

The idea of deducting tithes from salaries was widely supported by some Ugandan officials who are also Catholic believers. Many dismissed the archbishop's critics, saying Lwanga's suggestions were based on Scripture.

"The archbishop was reminding the church and only Catholics that they need the money to run church activities," said Betty Nambooze, a legislator representing Mukono, a town in central Uganda.

Catholics are Uganda's largest religious group, but the Catholic share of the population has declined slightly in recent years. Catholics made up 39.3 percent of the population in the 2014 census, down from 41.6 percent in 2002. Around 32 percent of Ugandans are Anglican, and 14 percent are Muslim.

"Any believer who is not paying his or her tithe has no space in heaven. They are stealing and cheating God," said Pastor Moses Mugisa of Redeemed Church of God, a Pentecostal church. "So there's no need of forcing believers to pay tithe through government."

Some vowed not to support the idea, saying the Bible does not sanction governments to collect tithes and offerings from worshippers.

"I want to ask the government to revoke credentials of any priest or bishop that petitions it to help them collect tithe," Cyrus Rod, a bishop at Dominion Temple International, a Pentecostal church, told journalists in Kampala. "The clergy are working purely for material reward and we'll not allow them to mislead the country. The role of priests is to collect tithes and offerings. It's a not a political role."

Mayanja and other Catholics said they will oppose Lwanga's proposal because they believe it goes against Catholic teaching.

"God does not demand a certain amount of money from his people," said Mayanja. "We give offering and tithe from our hearts. What our leaders are doing is extortion and is not based on the word of God."