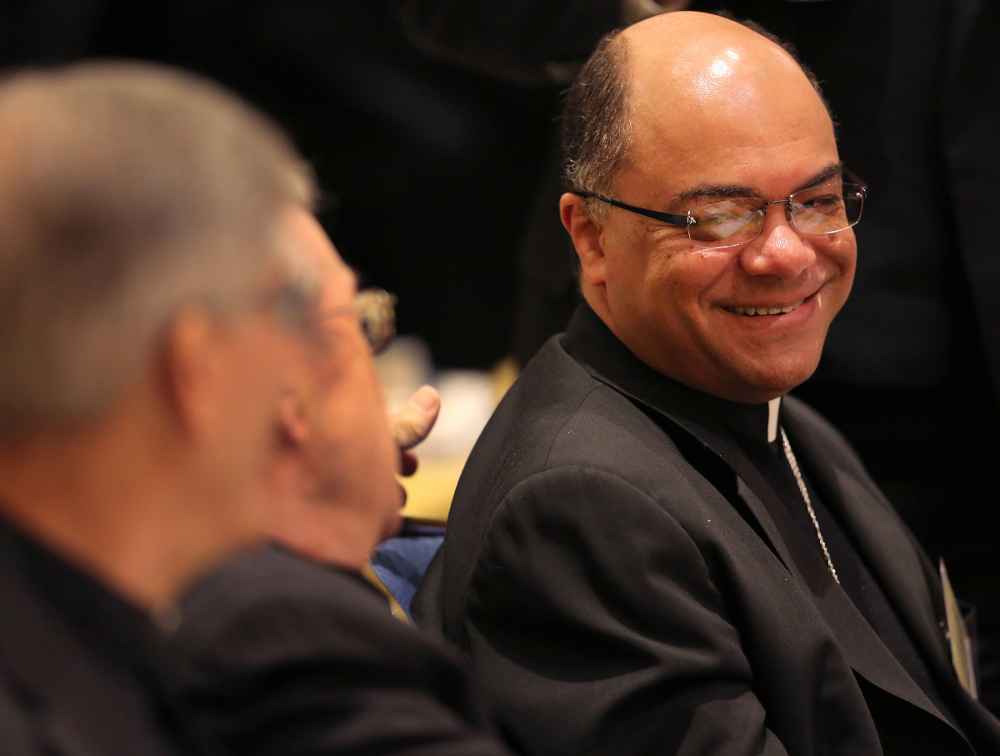 Bishop Shelton Fabre of Houma-Thibodaux, La., smiles as he sits with fellow bishops during the annual fall general assembly of the U.S. Conference of Catholic Bishops in 2014 in Baltimore. (CNS /Bob Roller)

"Despite many promising strides made in our country, the ugly cancer of racism still infects our nation," the U.S. bishops say in a proposed pastoral letter on racism.

The proposed statement, "Open Wide Our Hearts: The Enduring Call to Love — A Pastoral Letter Against Racism," will be considered for approval during the bishops' Nov. 12-14 fall general meeting in Baltimore.

"Racist acts are sinful because they violate justice. They reveal a failure to acknowledge the human dignity of the persons offended, to recognize them as the neighbors Christ calls us to love," the proposed pastoral letter says.

"Every racist act — every such comment, every joke, every disparaging look as a reaction to the color of skin, ethnicity or place of origin — is a failure to acknowledge another person as a brother or sister, created in the image of God," it adds.

"Racial profiling frequently targets Hispanics for selective immigration enforcement practices, and African-Americans for suspected criminal activity," it continues. "There is also the growing fear and harassment of persons from majority Muslim countries. Extreme nationalist ideologies are feeding the American public discourse with xenophobic rhetoric that instigates fear against foreigners, immigrants and refugees."

The proposed pastoral talks about institutional racism as well as individual acts, "when practices or traditions are upheld that treat certain groups of people unjustly. ... We tolerate prisons where the number inmates of color, notably those who are brown and black, is grossly disproportionate."

It also calls the water crisis in Flint, Michigan, an example of systemic racism, due to "policy decisions that negatively impacted the inhabitants, the majority of whom were African-Americans."

It added, "Racism still profoundly affects our culture, and it has no place in the Christian heart. This evil causes great harm to its victims, and it corrupts the souls of those who harbor racist or prejudicial thoughts."

"For a nation to be just, it must be a society that recognizes and respects the legitimate rights of individuals and peoples," the proposed pastoral says.

"God demands more from us. We can't, therefore, look upon the progress against racism in recent decades and conclude that our current situation meets the standard of justice."

"To understand how racism works today, we must recognize that generations of African-Americans were disadvantaged by slavery, wage theft, 'Jim Crow' laws," it says.

"Since the U.S.-Mexican War, Hispanics from various countries have experienced discrimination in housing, employment, health care and education," the proposed pastoral explains. Hispanics also "have been referred to by countless derogatory names" and are a major target of immigration raids and deportations," it adds.

Native Americans suffered at the hands of European settlers, it says, who "were blind to the dignity of indigenous peoples," and colonial policies and later U.S. policies toward Native Americans were often "violent" and "paternalistic." To this day these communities experience "great difficulties," including poverty, unemployment, inadequate health care and poor schools, the document says.

The proposed pastoral did not spare the U.S. church, either. "Acts of racism have been committed by leaders and members of the Catholic Church — by bishops, clergy, religious and laity — and her institutions," it says.

"To work at ending racism, we need to engage the world and encounter others — to see, maybe for the first time, those who are on the peripheries of our own limited view. Knowing that the Lord has taken the initiative by loving us first, we can fully go forward, reaching out to others," it says.

"Nationally, taking concrete action should include advocating for equality in how laws are implemented and advocating for moral budgets that reduce barriers to economic well-being, appropriate healthcare, education and training. We can also learn from the example of other countries, such as South Africa, Germany and Rwanda, and from certain institutions that have recognized past wrongs and have corrected the historical record."

Within the church, "we call on our religious education programs, Catholic schools and Catholic publishing companies to develop curricula relating to racism and reconciliation," the proposed pastoral says.

It adds, "We also charge our seminaries, deacon formation programs, houses of formation and all our educational institutions to break any silence around the issue of racism, to find new and creative ways to raise awareness, analyze curricula and to teach the virtues of fraternal charity."

"As bishops, we unequivocally state that racism is a life issue. Accordingly, we will not cease to forcefully speak against and work toward ending racism," says the proposed pastoral.

"St. Paul's own conversion is a powerful reminder of how God's grace can transform even the hardest of hearts."

Bishop Sheldon Fabre of Houma-Thibodaux, Louisiana, chairman of the bishop's Ad Hoc Committee Against Racism, had shepherded final stages of work on the document since May when he stepped in for Bishop George Murry of Youngstown, Ohio, who resigned as chair to undergo treatment for acute leukemia.

The Committee on Cultural Diversity in the Church in consultation and collaboration with the ad hoc committee and all the other standing USCCB committees, completed development of the proposed pastoral. The committee is chaired by Archbishop Gustavo García-Siller of San Antonio.

"Open Wide Our Hearts: The Enduring Call to Love," if approved, will mark the third time the nation's bishops have spoken as a group on race issues in the United States, but the first time in nearly 40 years, when they approved "Brothers and Sisters to Us: U.S. Bishops' Pastoral Letter on Racism in Our Day." In 1968, the bishops approved a statement, "The National Race Crisis."

In 1984, the nation's African-American bishops dealt with racism in their own pastoral letter, "What We Have Seen and Heard, A Pastoral Letter on Evangelization."