by Tom Roberts
This article appears in the Immigration and the Church feature series. View the full series. 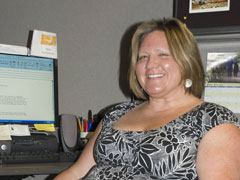 In this era of polarized politics and religion, one of the more contentious issues in both realms is immigration. The debate over the topic can quickly become heated and ugly, and it’s the rare occasion when opposing sides listen long enough to hear the other’s point of view.

That state of things may be beneficial to screaming talk-show venues and op-ed pages, but what about the church?

Christine Smith realized the degree of division caused by the subject soon after she arrived in the Boise diocese, which covers the entire state of Idaho, three years ago to take the position of parish and community partnership coordinator. “As I went throughout the state,” she said in an e-mail, “I discovered enormous division not only between cultural groups, but in particular around immigration.” The topic is of special importance to the church in Idaho, where, she said, half the Catholic population is Hispanic and includes many who are undocumented.

Bishop Michael Driscoll was hearing the same message from pastors and their staffs: Dealing with contentious legislative issues such as immigration and health care reform is one of the most difficult parts of the job. Smith quickly concluded that one of the greatest immediate needs in parishes was providing the means to work through internal conflicts.

“People needed a safe place to talk about things,” she said. “If we Catholics do not know each other or trust each other, achieving one voice as Catholics on any issues would not be possible.”

Smith was convinced that dialogue was key to dealing with such divisions. Overuse has squeezed most of the meaning out of the term. Real dialogue is more than just talking. Among people with deep differences, said Smith, dialogue takes discipline, rules and structure. Real dialogue isn’t debate or political speech or oratory of the persuasive kind. It requires listening as well as talking.

Among the goals of the effort was helping Catholics understand the church’s teaching on immigration, which advocates, among other things, certain steps to secure the border but also a means to earn legalization and a path to citizenship, “family-based” immigration reform, and a future worker program that would allow foreign-born workers to enter legally and return home.

Joene Arritola said the dialogue process helped her to see beyond the boundaries of the experience of her grandparents, who arrived legally from Spain’s Basque region and, though facing discrimination at the local level, worked hard, learned English and succeeded in assimilating.

The dialogue, which required that people speak only from their own experiences, began to open her eyes to a different reality for many of today’s immigrants, including such matters as poverty and lack of work that drove people over borders illegally to seek a better life for themselves and their families.

She said she began to see beyond the collective notion of “immigrants” to individuals. “I had information I didn’t have before,” said the 61-year-old retiree who does a range of volunteer work. “I began to realize that these are beloved children of God and they should be treated as children of God. We can’t throw them out and we can’t ignore these people. They should be treated with dignity and respect, as should all of us.”

The dialogues made a difference in people’s perception of church teaching, said Carol McGee, 60, a pastoral associate at Sacred Heart Church in Boise. “They heard what the church had to say about immigration,” she said. “People for the first time actually heard what the church taught, not what people thought it taught. Many were surprised that they actually agreed with the teaching.”

Participants were also affected by hearing the experience of actual immigrants who, in small groups, shared their experiences of coming to the United States, the reasons they came, and what it is like to live as an undocumented worker.

Beyond the immigration debate, said McGee, she sees a value in the structured dialogue approach for dealing with other divisive issues. “What I found with this process,” she said, “is that we can use it with anything that tends to be controversial or divisive. We could use this process to talk about things within the church,” which she said was “as polarized” in some ways as U.S. national politics.