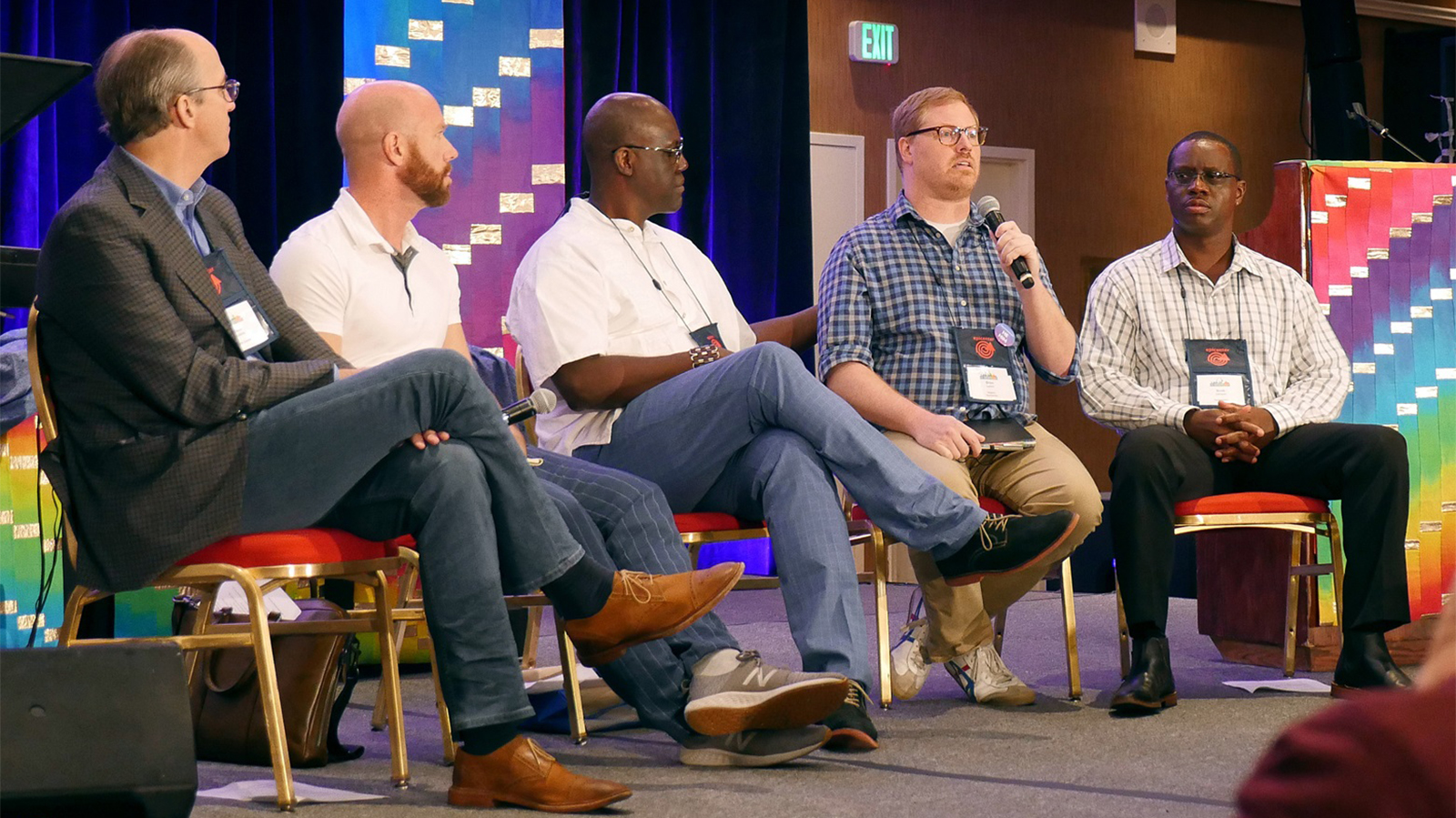 The Rev. Brian Atkins, second from right, speaks about the plans on offer from the Commission on a Way Forward during the For Everyone Born gathering in St. Louis in late July. (Heather Hahn/UMNS)

In Methodist circles these days, citing the founder's admonition can be understood only as a plea for an amicable solution to the denomination's coming showdown over homosexuality.

A special session of the General Conference, to be held in February in St. Louis, will decide whether, how and which churches within United Methodism will allow openly gay clergy and same-sex marriage rites, and whether homosexuality is "incompatible with Christian teaching." No matter which of three ways forward is adopted at the meeting, it's expected that some congregations will choose to sunder their ties to the worldwide body of United Methodism.

But if schism is at hand, nobody can accuse United Methodists of rashness.

Since the denomination's 2016 General Conference, church leaders have hashed out the question in forums and blogs. Entire books have been published presenting the case for unity, for separation, or both sides of the question. Advocacy groups are already gathering to strategize for the special conference and to lobby delegates and educate people in the pews.

Some of these groups say unity is still possible — and advisable, given the denomination's mission "to make disciples of Jesus Christ for the transformation of the world." That transcends issues of sexuality, they say.

"Jesus' prayer for unity in John 17 is one we hold as a very high value," said the Rev. Tom Berlin, lead pastor of Floris United Methodist Church in Herndon, Va., who served on the Commission on a Way Forward, a panel that narrowed the decision facing the special conference to three plans.

"Marriage and ordination of homosexual persons is not a church-dividing issue," he said. "It's a difficult conversation, but we've had those in the past with other issues, such as divorce and alcohol use. I believe we have the muscle strength to show the world we can have unity with diverse opinions."

Others assert that it's time to move forward separately.

"We are hurting and harming each other," said the Rev. Rob Renfroe, president of Good News, an unofficial evangelical ministry within the church. "What kind of unity is worth the damage we are doing? We can't quit fighting and we can't escape each other. It's time to quit the cage match."

Whichever path they espouse, everyone seems to agree that the United Methodists have to move beyond the bitter debate that has paralyzed the denomination for decades.

"We're in a place of crisis," said the Rev. Keith Boyette, president of the Wesleyan Covenant Association, a group of about 300 theologically conservative United Methodist churches. "The organization is no longer functioning."

Three options for ending the impasse are now on the table, with the decision in the hands of 864 delegates from around the globe who will meet at the special conference. The plans became public on July 17 when the 32-member Commission on a Way Forward submitted them to the denomination's Judicial Council for consideration at its October meeting. The commission's report was officially released in four languages on July 31.

The One Church Plan eliminates language in the church's governing Book of Discipline that calls homosexuality "incompatible with Christian teaching." Under the plan, clergy would be able, but not required, to perform same-sex marriages; local churches may vote on whether to allow the ceremonies in their buildings.

Language in the Book of Discipline barring "self-avowed practicing homosexuals" from the clergy would also be deleted; it would be left to the church's regional bodies, known as annual conferences, to determine whether to ordain LGBTQ members. Clergy could opt to transfer to churches or conferences that match their views.

"This plan removes the hurtful language from the Book of Discipline but allows pastors and churches who choose not to perform same-sex marriages the flexibility to do that," said Leah Taylor, a lay member of the Way Forward Commission from Texas. "I think it gives us the best opportunity to focus on grace."

Backers of the One Church Plan use the word "contextuality" – the idea that a church in rural Georgia operates completely differently from an urban mission in the Tenderloin district of San Francisco, and each can best reach people if allowed flexibility.

The One Church Plan is thought to be the leading choice and has been recommended by the church's Council of Bishops. But conservatives like Renfroe expect that hundreds, and possibly thousands, of theologically conservative churches will leave if the One Church Plan passes, including several of the church's largest and most affluent congregations.

Those objectors line up more readily behind the Traditional Plan, which would retain the Book of Discipline's existing language and add measures to enforce it — effectively conceding that Methodists' differences are irreconcilable. Its supporters maintain that keeping church members and clergy accountable to the Book of Discipline is the only way to repair the dysfunction.

"This plan reflects a consistent understanding of Scripture … and maintains the continuity with the Christian church both in history and around the world," said the Rev. Thomas Lambrecht, who submitted it to the special conference on behalf of the Commission on a Way Forward.

Traditionalists recognize that this strict approach will likely spur congregations and conferences that are already performing same-sex marriages and ordaining openly LGBTQ clergy, including one conference that has elected an openly lesbian bishop, to leave.

The plan, said Boyette, provides "a gracious means of exit for those who choose not to live in accordance with the Book of Discipline."

The last of the three plans, which has so far gained little traction, envisions reorganizing the denomination along theological lines. Called the Connectional Conference Plan, it divides the U.S. into three values-based branches that would replace the existing five geographical jurisdictions. Each branch would create its own Book of Discipline, elect its own set of bishops and set ordination standards.

"Local churches can choose the annual conference they want to be a part of," said Patricia Miller, who submitted the connectional plan — though as executive director of the conservative Confessing Movement, she personally supports the Traditional Plan. "It allows for three different branches, very loosely connected, in one church."

Some advocacy groups are offering a fourth option, the Simple Plan, which would remove all restrictive language in the Book of Discipline relating to homosexuality and promote full LGBTQ inclusion; the status of that plan is still in flux.

Details are being worked out as to how each plan would affect the denomination's pension plan and its churchwide boards and agencies, such as the United Methodist Committee on Relief, a disaster relief agency.

Many United Methodist congregations are already clearly aligned on one side of the homosexuality issue. But pastors like Stan Copeland of the 5,000-member Lovers Lane UMC in Dallas worry that the February decision could tear his church apart.

Copeland counts members from 18 different nations, staunch conservatives alongside LGBTQ people, those near the poverty line beside multimillionaires — not to mention the roughly 1,000 people who come to the campus every week for a wide array of 12-step programs. Copeland supports the One Church Plan.

"The world we're trying to transform needs to hear a message from the church that we stand for unity and togetherness in the midst of our diversity and differences," he said. "With all the division in our culture today, I think that's a very important message to espouse."