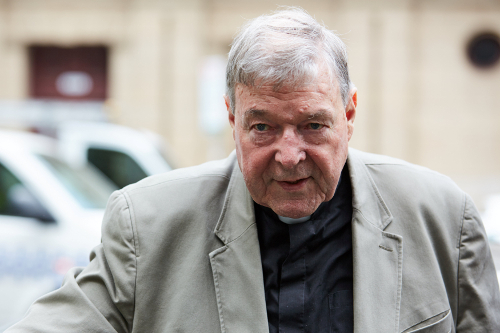 An Australian court found Cardinal George Pell guilty on five charges related to the sexual abuse of two 13-year-old boys; sentencing is expected in early March, but the cardinal's lawyer already has announced plans to appeal the conviction.

On Feb. 27, the judge will hear arguments from the prosecution and defense about the sentence, including the serious nature of the crime as well as mitigating circumstances, such as the fact it is the cardinal's first offense, his age and infirmity. While Pell is likely to be placed in custody ahead of sentencing, within about two weeks, his lawyers can also argue for bail in this period. 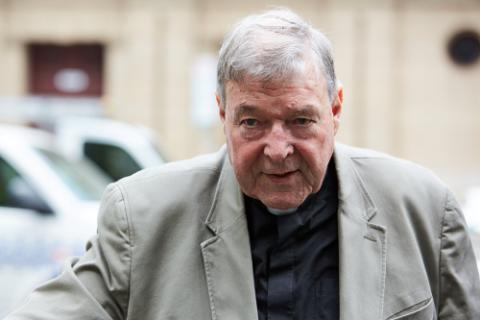 While an appeal is in process, Pope Francis has confirmed the "precautionary measures" prohibiting Pell from publicly exercising his ministry as a priest and from having contact with minors, Alessandro Gisotti, interim director of the Vatican press office, told reporters Feb. 26.

The jury's verdict that Pell, shortly after being named archbishop of Melbourne in 1996, sexually assaulted the two boys in the sacristy of Melbourne's St. Mary's Cathedral was handed down in December, but the court demanded the verdict and details about it not be reported until after a second trial on allegations that he abused several boys in the 1970s.

The judge lifted the reporting ban Feb. 25 after prosecutors announced they would not proceed with the second trial against the 77-year-old cardinal.

Pell's first trial on the charges related to the alleged abuse in Melbourne ended without a verdict in September due to a hung jury.

Archbishop Mark Coleridge of Brisbane, president of the Australian bishops' conference, said in a statement Feb. 26 that "the news of Cardinal George Pell's conviction on historical child sexual abuse charges has shocked many across Australia and around the world, including the Catholic bishops of Australia."

"The bishops agree that everyone should be equal under the law, and we respect the Australian legal system," the archbishop said. "The same legal system that delivered the verdict will consider the appeal that the cardinal's legal team has lodged."

"Our hope, at all times, is that through this process, justice will be served," he said. "In the meantime, we pray for all those who have been abused and their loved ones, and we commit ourselves anew to doing everything possible to ensure that the church is a safe place for all, especially the young and the vulnerable."

Ahead of an appeal – the results of which could take months – Pell is expected to be sentenced to serve jail time for the five counts: one count of "sexual penetration," in this case oral sex, and four counts of indecent acts with or in the presence of a minor under 16 years of age. Each count carries a maximum penalty of 10 years in prison. The judge may order him jailed pending the appeal.

Gisotti, speaking on behalf of the Vatican after the verdict was announced, called the verdict "painful news" and pointed out that "Cardinal Pell maintains his innocence and has the right to defend himself until the last stage of appeal."

Awaiting the results of the appeal, he said, the Vatican joins "Australian bishops in praying for all victims of abuse" and reaffirms its "commitment to do everything possible so that the church might be a safe home for all, especially for children and the most vulnerable."

The living victim who cannot be named, who testified in Pell's trial, released a statement saying he had experienced "shame, loneliness, depression and struggle" as a result of the abuse.

"At some point we realize that we trusted someone we should have feared, and we fear those genuine relationships that we should trust," the statement said.

The father of the other victim has engaged a lawyer to explore suing the cardinal. He said he did not know about the incident ahead of his son's death of a heroin overdose but noted that his son had descended into a spiral of drug abuse in his teens.

Some abuse victims groups in Australia have cheered the result, while Pell's supporters have highlighted what they regard as thin evidence that lead to the conviction.

Writing in Eureka Street, an online Jesuit journal, Jesuit Father Frank Brennan, a well-known human rights lawyer in Australia who attended some sessions of the trial, raised some questions about the evidence and offered some reflections on the trial.

The December verdict came at the end of a four-week trial during which Pell did not testify, Brennan said, but his police interview denying charges was admitted as evidence. One of the alleged victims is deceased; the jury watched the video recording of the testimony of the other victim from the initial trial, in which he was cross-examined by Pell's lawyer for more than a day.

"The complainant said that he and another choir boy left the liturgical procession at the end of one Sunday Mass and went fossicking (rummaging) in the off-limits sacristy where they started swilling altar wine," Brennan wrote. "The archbishop arrived unaccompanied, castigated them, and then, while fully robed in his copious liturgical vestments, proceeded to commit three vile sexual acts, including oral penetration of the complainant."

Pell's lawyers, he said, called witnesses who cast doubt on the possibility that the two boys left the procession unseen, that the cardinal returned to the sacristy alone and that, wearing full liturgical vestments, he could have "parted" or moved his alb to the side to expose himself to the boys.

"Although the complainant got all sorts of facts wrong, the jury must have believed that Pell did something dreadful to him," Brennan wrote. "The jurors must have judged the complainant to be honest and reliable even though many of the details he gave were improbable if not impossible."