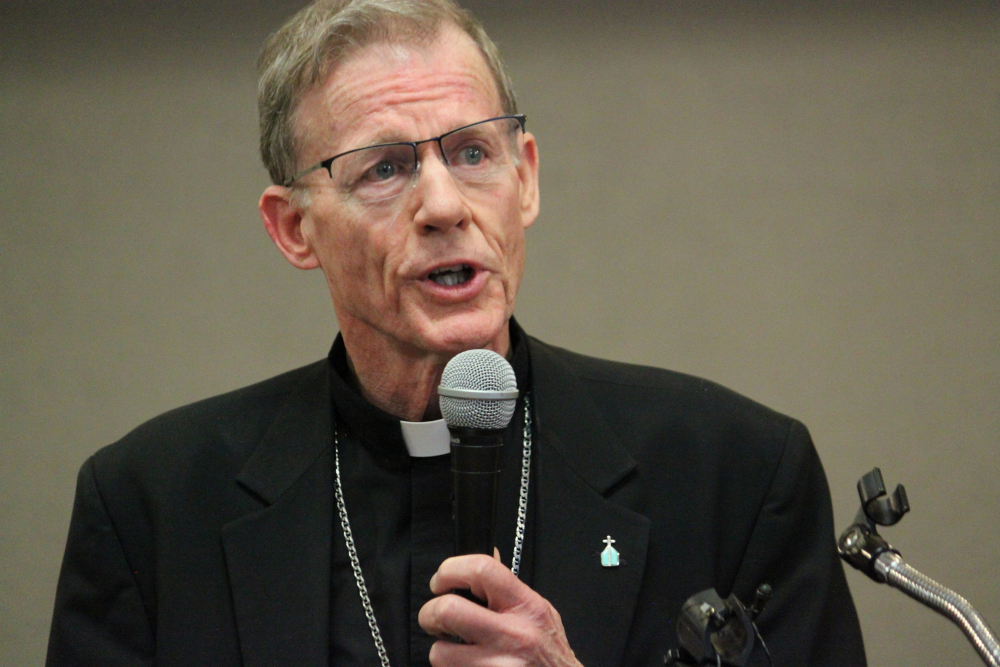 Archbishop John C. Wester, head of the Archdiocese of Santa Fe, N.M., talks to reporters on Nov. 29, 2018, in Santa Fe. A federal bankruptcy judge has approved a $121 million reorganization plan for one of the oldest Roman Catholic dioceses in the U.S. as it tries to stem financial losses from clergy abuse claims that date back decades. The Archdiocese of Santa Fe announced the outcome Thursday, Dec. 29, 2022. In a statement, Wester said he hopes the agreement will bring a measure of justice and relief to victims. (AP Photo/Susan Montoya Bryan, File)

A federal bankruptcy judge on December 29 approved a $121 million reorganization plan for one of the oldest Roman Catholic dioceses in the U.S. as it tries to stem financial losses from clergy abuse claims that date back decades.

The Archdiocese of Santa Fe in New Mexico said U.S. Bankruptcy Judge David T. Thuma confirmed the agreement during a hearing in which he commended the parties for working through what had been an arduous process.

In a statement, Archbishop John C. Wester thanked the panel of abuse survivors who represented fellow survivors in their claims against the archdiocese. He described it as challenging work as the group continued to deal with the aftermath of their own abuse.

“While I hope and pray that the bankruptcy outcome will bring a measure of justice and relief to the victims of clergy sexual abuse, I realize that nothing can ever compensate them for the criminal and horrendous abuse they endured,” Wester said.

He also pledged that the archdiocese will remain vigilant in upholding its zero tolerance policy by promptly responding to allegations and cooperating with local authorities.

The global priest abuse scandal has plunged dioceses around the world into bankruptcy and has cost the Roman Catholic Church an estimated $3 billion or more.

Aside from providing monetary payments to nearly 400 claimants, the terms of the settlement in New Mexico require the establishment of a public archive of documents showing how decades of abuse occurred around the state.

The result of nearly four years of legal wrangling, the reorganization plan effectively halted more than three dozen civil lawsuits in state court that alleged abuse of children by clergy and negligence by church hierarchy. Court records show the accusations dated from the 1940s to the 2010s.

The plan calls for the archdiocese, aided by contributions from parishes, to put up $75 million toward the total settlement fund, the Albuquerque Journal reported. Insurance companies agreed to pay $46.5 million.

In a side agreement, five religious orders that faced pending lawsuits will pay an additional $8.4 million to be shared by certain claimants. The orders include the Servants of the Paraclete, which ran a now-defunct treatment center for troubled priests and was accused of furnishing the archdiocese with priests and other clergy who preyed on children and teens.

Archdiocese attorney Thomas Walker said that of 376 survivor claimants who cast ballots on the plan, four voted to reject and three did not indicate acceptance or rejection. At least two-thirds of the abuse survivors who filed claims had to approve the plan.

Albuquerque attorney Brad Hall said his legal team has dealt with more than 250 clergy abuse survivors over the decade leading up to the bankruptcy filing in December 2018 and have talked with family members of others who had heart-wrenching stories.

"As for the actual survivors, it is our hope that some small compensation, however inadequate it might feel like to some of them, will help with a sense of closure and some accountability,” Hall said.

The archdiocese sold numerous properties to come up with the final negotiated contribution, including the archbishop’s house in Albuquerque. The archdiocese also took out a mortgage on the Cathedral Basilica of St. Francis of Assisi in Santa Fe.

Terence McKiernan, president of the nonprofit BishopAccountability.org, told the Journal that other dioceses in similar bankruptcy actions have had more survivor claimants and paid out less. He described settlement amounts during the mid-1990s as “terribly unfair.”

McKiernan said a key part of the settlement plan is the disclosure of documents, with redactions, by the archdiocese that will help the public understand how the clergy sexual abuse crisis occurred in New Mexico.

The archdiocese has said the document disclosure to a special library archive at the University of New Mexico will be unprecedented.

“It is highly significant that documents are included in such a massive way to be made available to everyone who wants to read them. It’s utterly remarkable,” said McKiernan, “It’s going to change our understanding (of the crisis) in a major way.”