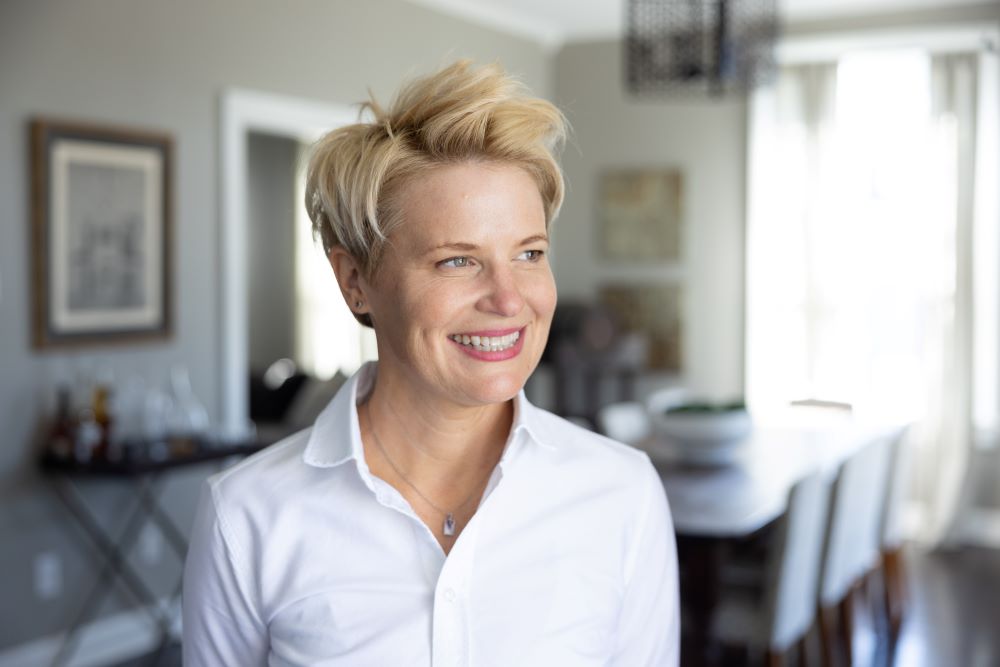 Kelly Easter of East Nashville, Tennessee, a single lesbian, recently prevailed in her legal case to participate in a federal foster care program run by a subcontracting agency of the U.S. Conference of Catholic Bishops. Easter still questions how the case was resolved and what would happen if she is in a romantic relationship with a woman. (Courtesy of Kelly Easter)

Kelly Easter won her legal battle to become a foster parent to refugee children. But Easter still feels like she's "in limbo."

"I don't know what to make of it," Easter said of the U.S. Conference of Catholic Bishops' explanation earlier this year that "a misunderstanding" caused one of its subcontracting agencies in 2020 to deny her application to become a foster parent because she is gay.

Easter and one of her lawyers told NCR that they tried to find out how that misunderstanding happened. They also attempted to learn if the bishops' conference would move to revoke her foster license if Easter, who is single, begins dating or marries a woman.

"We never did get answers to those questions," said Kenneth Upton, an attorney with Americans United for Separation of Church and State. Americans United and Lambda Legal, a civil rights organization that supports the LGBTQ community, represented Easter.

Catholic organizations that advocate for LGBTQ rights in the church also have questions about Easter's case — as well as criticism about the bishops' official policy on gay, lesbian and transgender people who want to adopt and foster children. They note that the bishops' conference is a defendant in Marouf v. Becerra, a pending federal lawsuit filed in 2018 by a lesbian couple in Texas whose application to become foster parents was denied by Catholic Charities Fort Worth. The USCCB receives federal funding to provide shelter and assist with placement for children in its custody.

"Church officials are really going to have to grapple with their history of suggesting that gay people are dangerous to kids, which underlies so much of their messaging," said Marianne Duddy-Burke, the executive director of DignityUSA, a Massachusetts-based advocacy nonprofit for LGBTQ Catholics. 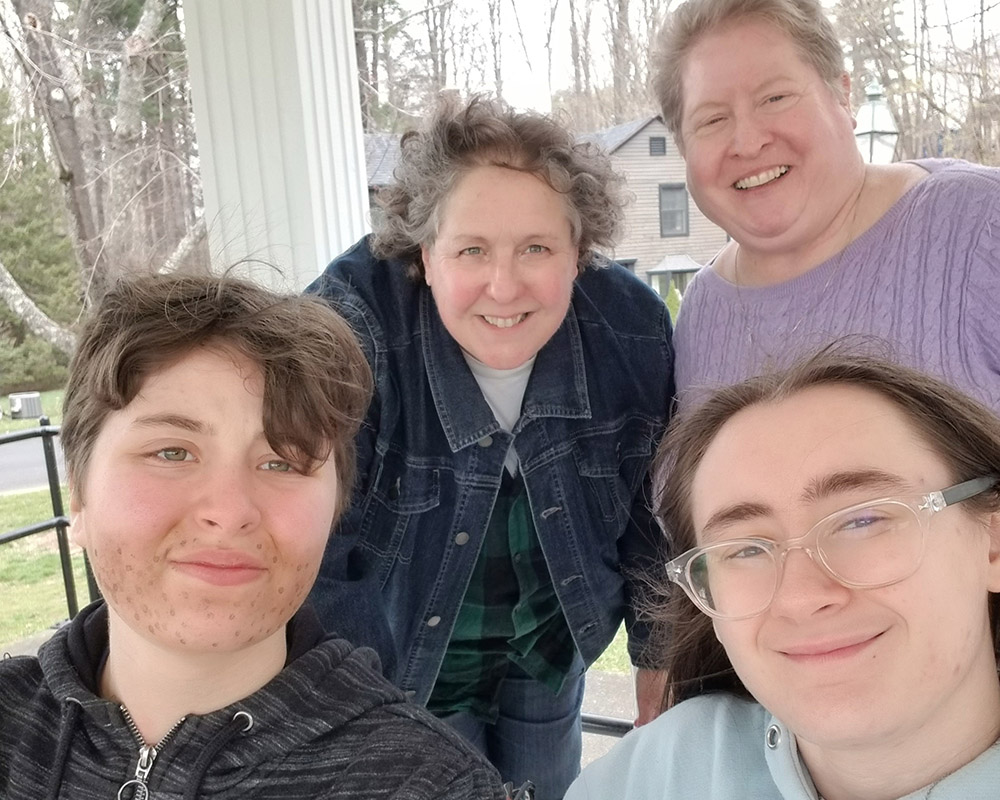 Marianne Duddy-Burke, top right, takes a family photo with her spouse Becky and their children Finn and Emily. The Catholic Church turned Marianne and Becky away from adopting children because "they knew we were a female couple." She and Becky eventually adopted Emily and Finn through a state agency in Massachusetts. (Courtesy of Marianne Duddy-Burke)

Duddy-Burke, who tried to foster children through Catholic Charities of Boston about 20 years ago but was turned away because she was married to a woman, told NCR that the resolution in Easter's case could signal an opening for single lesbian and gay people, as well as those who identify as transgender and nonbinary, to foster children through religiously affiliated child welfare agencies.

But Duddy-Burke said the case also bumps up against official Catholic teaching that homosexual acts are sinful and statements from several church leaders, including Pope Francis, that the ideal family setting for children is with a father and mother.

"I think this case really is at the intersection of all of that," Duddy-Burke said.

Related: Pope Francis on gay Catholics: God 'does not disown any of his children'

At first glance, Easter's legal victory would appear to be a significant moment for LGBTQ rights in Catholic settings.

In late February, the bishops' conference said it did not object to allowing a single person, regardless of their sexual orientation, to provide a home for unaccompanied refugee children. The bishops conference is one of two religiously affiliated agencies — the other is Lutheran Immigration and Refugee Service — that contracts with the federal government to place those children in foster care.

The bishops' conference explained that stance in a Feb. 25 letter to the Tennessee state director of Bethany Christian Services, a subcontractor that had denied Easter's foster care application on grounds that its agreement with the bishops' conference prevented it from accepting Easter into the program because she is gay. In October 2021, Easter filed a lawsuit against the U.S. Department of Health and Human Services, which provides the funding and oversees the migrant foster care program.

Chieko Noguchi, a spokeswoman for the bishops' conference, told NCR that the court case — in which Easter's lawyers accused the federal government of sanctioning discrimination — "was driven by a misunderstanding about Church teaching."

"That is neither a 'change' in the USCCB's position, nor a change in Church teaching," said Noguchi, who also told NCR by email that Catholic teaching "does not prohibit the placement of foster children with a single person irrespective of that person's sexual orientation."

Noguchi declined to comment further on the case, including responding to NCR's questions about whether USCCB-funded agencies have previously placed foster children with single LGBTQ people, or if Easter could lose her foster license if she enters into a romantic relationship.

Said Duddy-Burke: "I'd love to know what the conversations between Bethany Christian and the USCCB were that influenced this case." 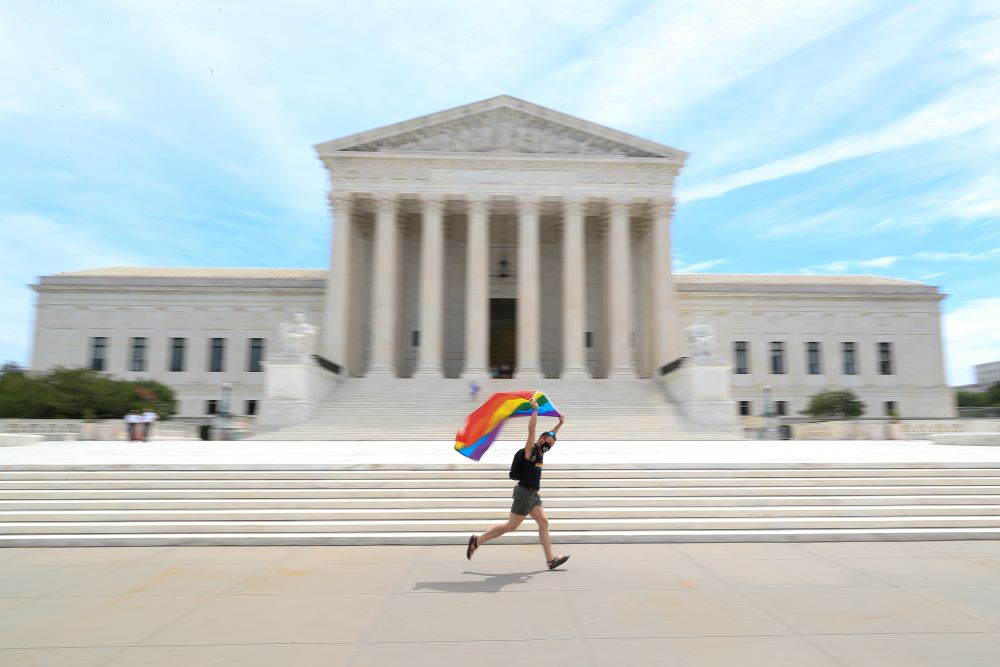 A person runs with a gay pride flag in front of the U.S. Supreme Court building in Washington June 15, 2020. In a 6-3 vote that day, the Supreme Court said LGBTQ people are protected from job discrimination by Title VII of the Civil Rights Act of 1964. (CNS/Reuters/Tom Brenner)

"Maybe it isn't a change in policy, but finally they've at least stated that on the record," DeBernardo said. "I don't recall that they've ever stated that publicly. To me, that's an important step and I think it helps bishops and agency directors have a precedent to fall back on when they do want to allow single gay and lesbian parents to adopt."

A review of the bishops conference's website on migrant foster care, as well as materials found on the web pages of the conference's roughly a dozen subcontracting agencies, did not turn up any explicit guidance that says single LGBTQ people are eligible to participate in the program.

The subcontracting agencies, which include diocesan Catholic Charities agencies, make it clear that single people can become foster parents for refugee and migrant children. But a few specify that single applicants must not be living with a romantic partner. The foster parent application for Catholic Charities in the Archdiocese Galveston-Houston, for example, inquires if the prospective foster parent is living, even part time, with "any romantic partner" to whom they are not married.

For married foster applicants, some subcontractor agencies specify that they must meet the church's definition of marriage, which is that of a union between one man and one woman. In several position papers and public statements, the bishops' conference has been adamant in its position that the government has no right to compel religiously affiliated social service agencies to violate their religious or moral principles when placing adoptees or foster children.

In June 2021, the bishops' conference praised a U.S. Supreme Court ruling that sided with a Catholic social service agency in Philadelphia that ran afoul of that city's anti-discrimination laws by not considering married LGBTQ couples for its foster program. The court's 6-3 decision, limited in its reach, said the agency was entitled to a renewal of its contract with the city to screen foster parents.

"We certainly understand that the USCCB objects to same-sex couples who are married because they don't view that as a valid marriage under their religious beliefs. That's kind of well known," Upton said. "But the area around how they treat single people or single gay people who may be in relationships, but aren't married, that's all still kind of up in the air. And apparently nobody can get an answer to that."

According to court filings in Easter's lawsuit, the bishops' conference has told the Office of Refugee Resettlement, the federal agency which administers the foster care program, that its agreement with subgrantees requires them to comply with a provision titled, "Catholic Identity." Under that provision, the subgrantee "must ensure that services provided to those served under this Agreement are not contrary to the authentic teaching of the Catholic Church, its moral convictions, and religious beliefs."

It was that provision that prompted Bethany Christian Services to reject Easter's initial foster application in fall 2020. Even after Bethany changed its national policy in March 2021 to allow gay and lesbian parents to participate in their foster programs, Easter was told — after months of back-and-forth emails and phone calls — that she could not enroll in Bethany's program near her home in East Nashville because that program was funded by the Catholic bishops' conference.

"Bethany was very certain that their contract with the Catholic bishops prevented them from placing a foster child with Kelly," said Upton, who added that it "seems odd" that a misunderstanding continued for more than a year.

"It certainly wasn't a misunderstanding until [the Department of Justice] got involved in the case and tried to figure out what was going on," Upton said.

While grateful that Bethany Christian Services has since accepted her into the program, Easter said she had hoped for answers "just so I know moving forward what to be prepared for."

"I understand people have beliefs that sometimes have been installed in them since childhood. And I try to keep an open heart and try not to judge. Clearly, I know what it's like to be judged by people who've never had a chance to know you," said Easter, a realtor who says she loves kids and believes that she can provide a good nurturing home.

Easter said she is now officially licensed to be a foster parent with Bethany Christian Services, which she said tried to be as kind and accommodating as it could be throughout the process.

"I'm ready," Easter said. "I have just been getting these last details completed in my house so I can welcome a foster kid in here, and that should happen pretty soon."

A version of this story appeared in the Aug 5-18, 2022 print issue under the headline: Gay woman wins battle against US bishops to become foster parent.