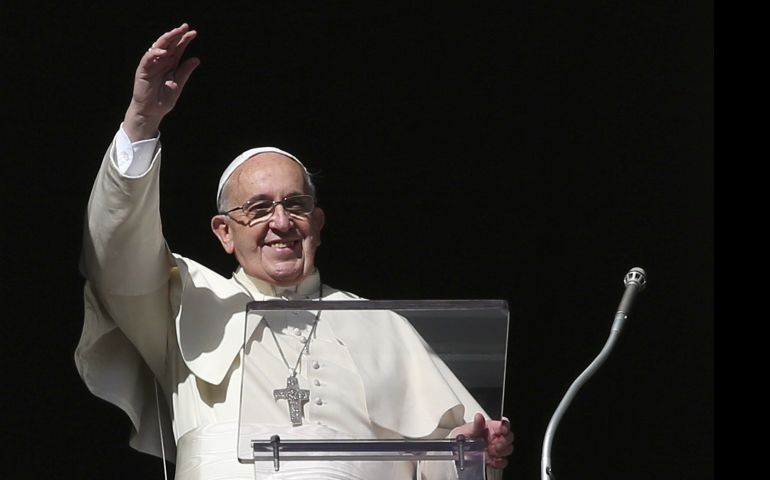 Pope Francis waves during his Angelus prayer in St. Peter's Square at the Vatican Nov. 16. The following day, Pope Francis confirmed he will visit Philadelphia in September for the World Meeting of Families. (CNS/Reuters/Alessandro Bianchi)

Vatican City — Addressing a Vatican conference promoting a traditional understanding of marriage, Pope Francis Monday asserted a right of children to grow up in homes with mothers and fathers but urged the de-politicization of families.

"We must not fall into the trap of qualifying [family] with ideological concepts," said the pontiff, speaking at an event organized to bolster inter-religious support for the concept of complementarity of men and women in marriage.

"We cannot qualify [the family] with concepts of an ideological nature that only have strength in a moment of history and then fall," Francis continued. "We cannot talk today of conservative family or progressive family: Family is family."

"The family is in itself, has a strength in itself," said the pontiff.

Francis also said Monday that he is planning to visit the United States in September 2015, for the World Meeting of Families being hosted by the Philadelphia archdiocese. Smiling towards Philadelphia Archbishop Charles Chaput, present in the Vatican audience, Francis said that "God willing" he would make the trip.

Francis' remarks on that score confirmed long speculation about the trip, which could see the pontiff visit several U.S. cities. Besides Philadelphia, Francis has been invited to address the U.N. in New York and a joint session of Congress in Washington. If Francis made the congressional address, he would be the first pontiff to do so.

The Vatican conference -- titled "Humanum: The Complementarity of Man and Woman" -- is being held Monday-Wednesday and has been organized by four Vatican offices. It has attracted wide press coverage for its subject matter, which staunchly promotes marriage as fundamentally limited to male-female unions.

Drawing together a wide range of religious representatives -- from the pontiff; to Anglican and evangelical leaders; to Rabbi Jonathan Sacks, the former chief rabbi of the UK; to representatives of Buddhist, Taoist and Jain traditions -- the conference is centered on the idea that men and women have a type of complementarity that is uniquely important for marriage.

While speakers at the event have shied away from directly addressing or criticizing same-sex unions, most left little doubt about their view of such relationships.

On that subject, Francis himself said: "Children have the right to grow up in a family, with a father and a mother, able to create a suitable environment for their development and their emotional maturation."

The pontiff also said "today marriage and the family are in crisis."

"We now live in a culture of the temporary, in which more and more people are simply giving up on marriage as a public commitment," said Francis.

"This revolution in manners and morals has often flown the flag of freedom, but in fact it has brought spiritual and material devastation to countless human beings, especially the poorest and most vulnerable."

German Cardinal Gerhard Muller, prefect of the Vatican's Congregation for the Doctrine of the Faith, spoke after the pontiff and focused his remarks on the male and female imagery found in the creation stories of Genesis.

Tying the imagery of the Adam and Eve in the Genesis story to mankind's relationship with God, Muller stated: "When we forget sexual difference, then it becomes difficult to understand the marriage bond between God and his people."

The Vatican's Congregation for the Doctrine of the Faith is one of the events' four sponsors.

Sacks, who also is a member of Britain's House of Lords, made the only oblique reference to same-sex marriage during Monday's morning session.

Mentioning the story of Alan Turing, an early 20th century gay British mathematician who was punished with chemical castration because of his sexual orientation, Sacks said: "That's the kind of world to which we should never return."

"But our compassion for those who choose to live differently should not prohibit us from being advocates," said Sacks, referring to traditional marriage as "the best means for which we have discovered for nurturing future generations."

During his address, Francis also urged the conference participants not to think of complementarity as a "simplistic idea that all the roles and relations of the two sexes are fixed in a single, static pattern."

"Complementarity will take many forms as each man and woman brings his or her distinctive contributions to their marriage and to the formation of their children -- his or her personal richness, personal charisma," said the pontiff.

"Complementarity becomes a great wealth," he continued. "It is not just a good thing but it is also beautiful."

Also speaking at the conference Monday morning was Mercy Sr. M. Prudence Allen, an American who was recently appointed as a member of the Vatican's International Theological Commission.

In her remarks, Allen warned against gender and sex ideology, which she said were founded on "deceptive methods."

Those ideologies, she said, "distort the true equal dignity and difference of women and men."

"Like a cancerous cell these ideologies grow, often obliterating the true meaning of marriage," Allen said.

The presentations are being accompanied by a number of films specially made for the event on a number of subjects, including: "The Destiny of Humanity: On the Meaning of Marriage," "A Hidden Sweetness: The Power of Marriage Against Hardship," and "Challenge and Hope for a New Generation."