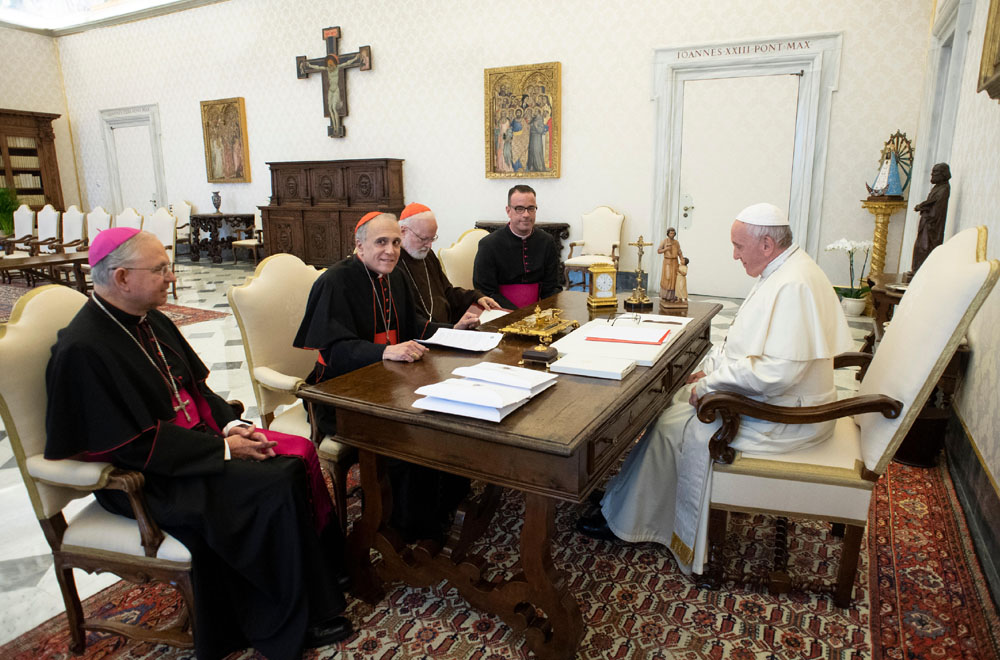 The highly anticipated meeting between Pope Francis and the leaders of the U.S. bishops' conference on the continuing clergy sexual abuse scandal resulted in a "lengthy, fruitful, and good exchange," the American prelates said in a statement afterwards.

Galveston-Houston Cardinal Daniel DiNardo said in a release that he and the three others taking part in the encounter told the pontiff how the church in the U.S. had been "lacerated by the evil of sexual abuse," and that the pope "listened very deeply from the heart."

The Vatican did not release any information about the encounter, aside from official photos and a brief video of its beginning. The statement from the U.S. bishops came about four hours after its scheduled start at noon-time in Rome.

The meeting was the first of its kind since 2002, when eight U.S. cardinals were summoned to Rome to discuss revelations of abuse with Pope John Paul II.

DiNardo first requested the encounter with Francis Aug. 16, two days after the Aug. 14 release of a grand jury report in Pennsylvania revealed that more than 300 priests had been accused of committing sexual assault in six dioceses in the state over seven decades.

Release of that report came shortly after retired Washington Archbishop Theodore McCarrick renounced his place in the College of Cardinals in the wake of revelations that he sexually harassed or abused several young men during his rise to become one of the U.S. church's most senior prelates.

In his Aug. 16 statement, DiNardo said he would be inviting the Vatican to conduct an apostolic visitation, or investigation, of how McCarrick's abuse had not been reported earlier.

In a striking concurrence, as the Sept. 13 meeting between Francis and the U.S. bishops began at noon, the Vatican announced in its daily bulletin that the pope had accepted the resignation of Wheeling-Charleston, West Virginia, Bishop Michael Bransfield, and appointed Baltimore Archbishop William Lori as the diocese's apostolic administrator.

Although Bransfield, a relative of the U.S. bishops' general secretary, had reached the traditional retirement age of 75 Sept. 8, Lori said in a statement that he had been asked "to conduct an investigation into allegations of sexual harassment of adults against Bishop Bransfield."

It is unknown what specific allegations Lori has been asked to investigate, but Bransfield was the subject of scrutiny in 2012 when a witness in a Pennsylvania trial of two priests alleged hearing someone else claim that Bransfield had abused a teenage boy as a priest in Philadelphia years ago.

Bransfield denied the claim at the time, calling it "unbelievable and shocking," and the Wheeling-Charleston diocese said in a statement that another person present during the alleged incident said the future bishop "never engaged in any improper conduct of any kind."

The night before Francis' meeting with the U.S. bishops, a story from the Associated Press raised questions about how DiNardo had handled reports of abuse by a priest in Houston.

The Vatican video of the beginning of the small papal summit showed DiNardo, O'Malley, Gomez, and Bransfield each greeting Francis, pausing for a photo together, and then sitting around the pontiff's desk in the apostolic palace.

In the official photos, DiNardo is sitting directly across from Francis; Gomez to the president's right; and O'Malley to his left. Bransfield is angled at the corner of the desk.

One picture also shows four large envelopes, each sealed with a Vatican stamp, placed off to the side of the desk, which may have contained material Francis was preparing to give the U.S. prelates.

A version of this story appeared in the Oct 5-18, 2018 print issue under the headline: US bishops release action plan on abuse.