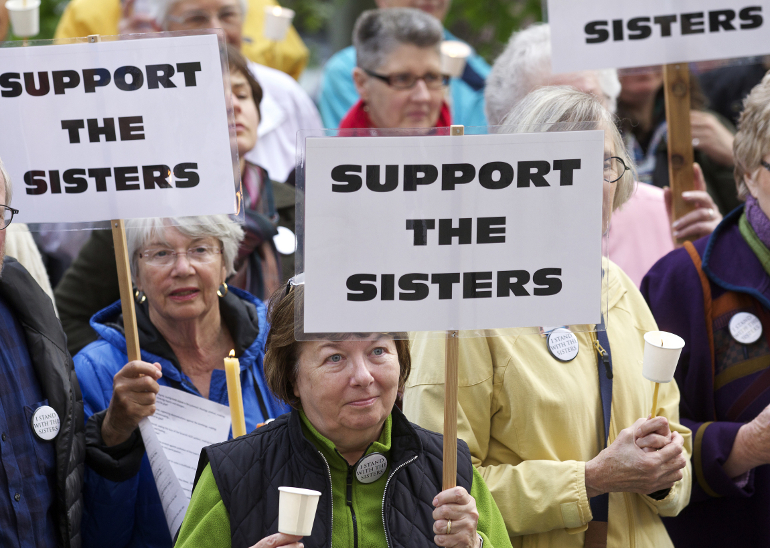 Jenner Mathiasen, center, of Seattle takes part in a vigil outside St. James Cathedral in Seattle May 8 to support sisters against the Vatican's call for a reform of the Leadership Conference of Women Religious. (CNS photo/Stephen Brashear)

A harsh Vatican critique of the organization representing most U.S. women religious was based on unsubstantiated accusations, comes from a flawed process and has caused "scandal and pain throughout the church," the sisters' group said in a statement this morning.

The statement, issued Friday by the Leadership Conference of Women Religious (LCWR), came after three days of meetings among the group’s national board and is the first official public response to the Vatican Congregation for the Doctrine of Faith's April 18 assessment of the organization, which represents some 80 percent of U.S. Catholic sisters.

That stinging Vatican assessment ordered LCWR to revise its statutes, programs and affiliations and place itself under the authority of Seattle Archbishop Peter Sartain.

Friday’s statement said that during their meetings this week LCWR national board members raised concerns about “both the content of the doctrinal assessment and the process by which it was prepared” and that the group’s president and executive director will soon travel to Rome to “raise and discuss” their concerns with Vatican officials.

“Board members concluded that the assessment was based on unsubstantiated accusations and the result of a flawed process that lacked transparency,” the statement continues.

“Moreover, the sanctions imposed were disproportionate to the concerns raised and could compromise their ability to fulfill their mission. The report has furthermore caused scandal and pain throughout the church community, and created greater polarization.”

Ending by saying that the LCWR board understands that the Vatican’s move has “deeply touched” Catholics and non-Catholics alike, the statement says the board “believes that the matters of faith and justice that capture the hearts of Catholic sisters are clearly shared by many people around the world.”

“As the church and society face tumultuous times, the board believes it is imperative that these matters be addressed by the entire church community in an atmosphere of openness, honesty, and integrity,” the statement, which is available on the group's website, concludes.

The Vatican’ April critique sparked a widespread showing of support for Catholic sisters, with prayer vigils being held outside cathedrals across the country and statements of support appearing in numerous national news outlets.

First news of the Vatican’s order came in a press release from the U.S. bishops’ conference April 18, which announced that the Vatican's Congregation for the Doctrine of the Faith, headed by Cardinal William Levada, had given the order for LCWR’s revision.

The Vatican congregation had begun an investigation of the group, known as a "doctrinal assessment,” in 2009. The release from the bishops’ conference also stated that Sartain had been appointed “archbishop delegate” for LCWR and had been granted wide-ranging authority over the group.

According to that release, Sartain is to be assisted in that role by Bishop Leonard Blair of Toledo, Ohio, and Bishop Thomas Paprocki of Springfield, Ill.

The involvement of the U.S. bishops’ conference in the initial press release on the subject has led to speculation regarding its influence in the Vatican decision, with some press accounts saying key U.S. bishops may have had particular input.

Mercy Sr. Mary Ann Walsh, director of media relations for the bishops’ conference, would only say in an April interview that the order “came from the Congregation for the Doctrine of the Faith.”

Levada, Sartain, Blair, and Paprocki have not responded to repeated requests for comment on the matter.

In a terse statement April 19, LCWR leadership said they had been “stunned” by the Vatican’s order. An email the same day sent by the group to the heads of each of the congregations it represents said LCWR leadership had been in Rome for an annual meeting with members of the Vatican congregation when it was first told of the news.

When LCWR leaders arrived for that meeting, said the email, they were informed that the congregation had already communicated the Vatican order to the U.S. bishops’ conference.

According to Friday’s statement, LCWR’s president, Franciscan Sr. Pat Farrell, and executive director, St. Joseph Sr. Janet Mock, are planning to return to Rome June 12 to meet with Levada and Sartain. The statement also says LCWR is planning to organize regional meetings with its members to in order to “determine its response” to the Vatican order.

LCWR members are also expected to discuss the matter in the group’s annual gathering, to be held in August.

One of the things expected to be discussed in those meetings is whether the group might leave the formal canonical structures of the church and reform itself as a non-profit organization.

According to the April 18 document from the Vatican congregation, Sartain is to be given authority over LCWR in five areas, including revision of its statues, plans and programs, and “offering guidance on the application of liturgical texts.”

That letter also identified three major areas of concern the congregation had with the sisters’ group, including supposed "corporate dissent" in the congregation regarding the church's sexual teachings and a supposed "prevalence of certain radical feminist themes incompatible with the Catholic faith" present in some of the organizations programs and presentations.

"Both the Congregation for the Doctrine of the Faith and I are wholeheartedly committed to dealing with the important issues raised by the Doctrinal Assessment and the LCWR Board in an atmosphere of openness, honesty, integrity and fidelity to the Church’s faith," writes Sartain, in his statement. "I look forward to our next meeting in Rome in June as we continue to collaborate in promoting the important work of the LCWR for consecrated life in the United States."

"The Holy See and the Bishops of the United States are deeply proud of the historic and continuing contribution of women religious – a pride that has been echoed by many in recent weeks.

Previous reporting from NCR on the Vatican's investigation of LCWR: