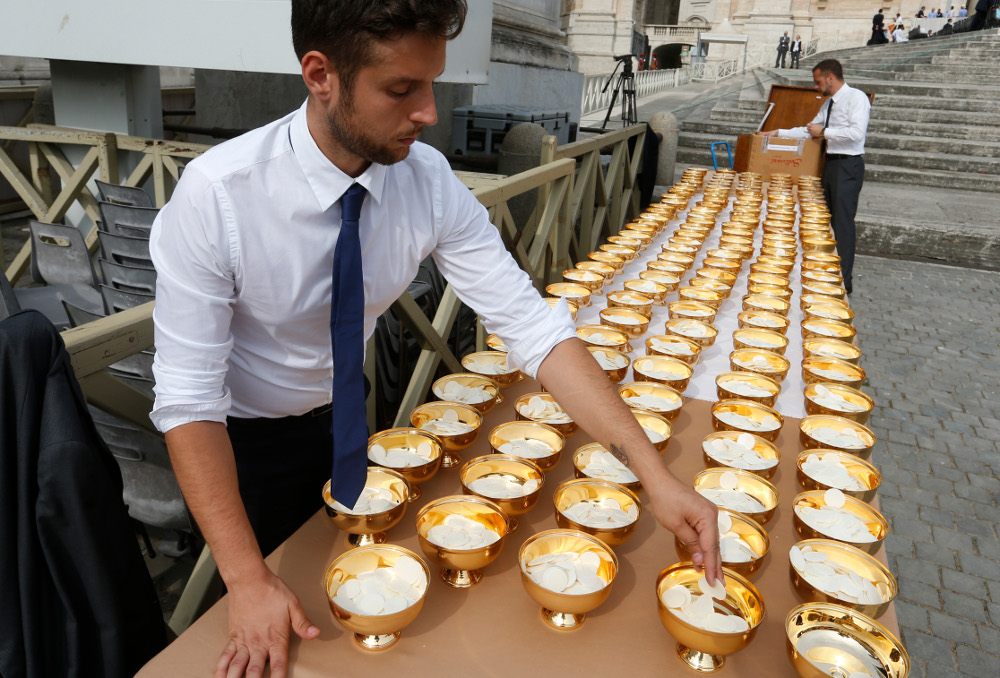 An assistant prepares ciboria of hosts for Communion before Pope Francis' celebration of Mass marking the feast of Pentecost in St. Peter's Square at the Vatican June 4, 2017. (CNS/Paul Haring)

The Vatican has asked Germany's Catholic bishops to adapt a proposal to allow non-Catholic spouses to receive communion so it might satisfy objections from a minority of the country's prelates, who questioned the doctrinal legitimacy of the initiative.

In a press release May 3 after meetings in Rome that day between six German bishops and four curial officials, the Vatican said the head of the Congregation for the Doctrine of the Faith had asked the prelates "to find, in a spirit of ecclesial communion, a possibly unanimous outcome."

Pope Francis asked the delegation of German bishops to come to Rome last month after three-quarters of the prelates approved the development of pastoral guidelines for determining situations in which a non-Catholic spouse married to a Catholic could take Eucharist in the church.

Seven German bishops had expressed disagreement with the move, writing to the head of the doctrinal congregation, Archbishop Luis Ladaria, and the president of the Pontifical Council for Promoting Christian Unity, Cardinal Kurt Koch, asking whether the bishops' conference had authority to issue such guidelines.

The May 3 press release does not give indication of whether Ladaria or other Vatican officials agreed or disagreed with the bishops' conference's authority on the matter.

"During the course of the meeting ... Archbishop Ladaria illustrated that Pope Francis appreciates the ecumenical commitment of the German bishops and asks them to find, in a spirit of ecclesial communion, a possibly unanimous outcome," the release states.

Among issues discussed in the encounter, states the release, were: "the connection of the question with faith and pastoral care, its relevance for the universal church, and its juridical dimension."

"Archbishop Ladaria will inform the Holy Father about the contents of the dialogue," the release concludes. "The meeting took place in a cordial and fraternal atmosphere."

Francis has also spoken about the need for what he calls a "healthy decentralization" in the Catholic Church, and has asked for a deeper consideration of the theological status of bishops' conferences.

Besides Ladaria and Koch, the Vatican officials taking part included Bishop Markus Graulich, undersecretary of the Pontifical Council for Legislative Texts; and Fr. Hermann Geissler, an official at the doctrinal congregation.

A version of this story appeared in the May 18-31, 2018 print issue under the headline: Vatican asks German bishops to agree on Communion.