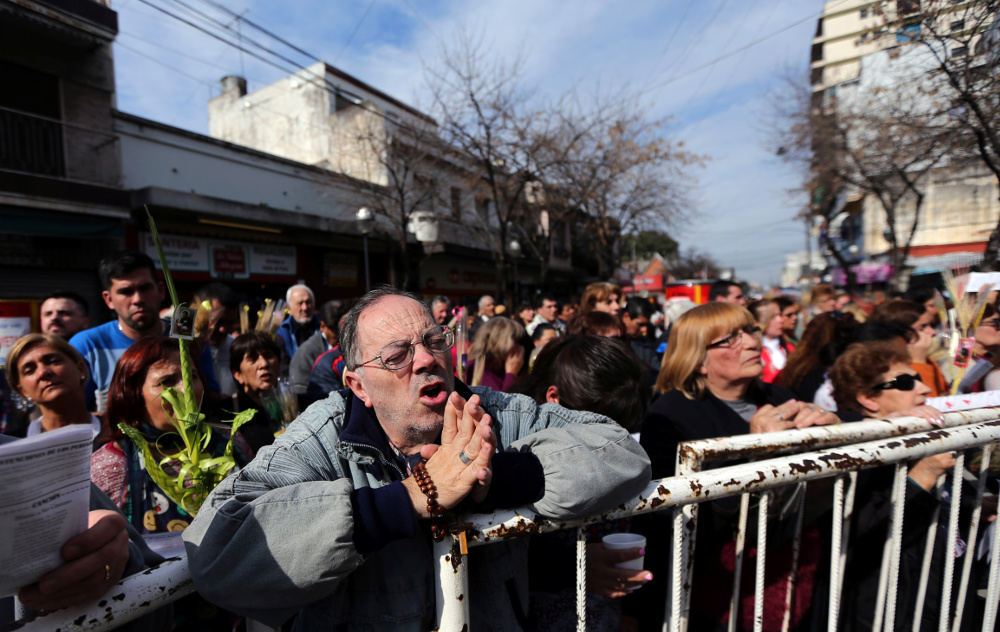 Argentine Catholics pray outside St. Cajetan Church in in Buenos Aires in this 2017 file photo. The Vatican press told reporters in a note Jan. 4 that accusations of sexual abuse against Bishop Gustavo Zanchetta, 54, emerged in the "autumn" of 2018. (CNS/Marcos Brindicci, Reuters)

A bishop from Argentina who had been working in the Vatican's real estate administration office is the object of a preliminary diocesan investigation after accusations came to light of sexual abuse, abuse of power and mismanagement in his former Diocese of Oran.

The interim director of the Vatican press office,  Alessandro Gisotti *, told reporters in a note Jan. 4 that accusations of sexual abuse against Bishop Gustavo Zanchetta, 54, emerged in the "autumn" of 2018.

"On the basis of these accusations and from news appearing recently in the media," Bishop Luis Antonio Scozzina of Oran "has already begun to collect some testimony which still needs to get to the Congregation for Bishops" at the Vatican, Gisotti wrote.

The case will be handed over to a special commission for bishops if credible evidence is found, he added.

"During the preliminary investigation, Zanchetta will abstain from working" at the Vatican office, Gisotti wrote.

Born in the province of Santa Fe, Argentina, in 1964, Zanchetta was ordained a priest of the Diocese of Quilmes, near Buenos Aires, in 1991.

He was named by Pope Francis in July 2013 to lead the Diocese of Oran; however, he asked the pope to accept his resignation in 2017 for "reasons of health."

Four months after his resignation, Zanchetta was named by Pope Francis to a newly created role of "assessor" at the Administration of the Patrimony of the Holy See, commonly referred by its Italian acronym APSA. The office handles the Vatican's investment portfolio and its real estate holdings.

According to Gisotti, "no accusation of sexual abuse had emerged at the time of the nomination to assessor," specifying that those accusations had only come to light last fall.

Zanchetta, Gisotti said, was appointed to his position at APSA because of "his administrative management abilities."

According to reports in late December by the local Argentine media outlet, El Tribuno, three priests had gone to the papal nuncio, Congolese Archbishop Leon Kalenga Badikebele, with accusations against Zanchetta of sexual abuse. Another 10 priests reported abuses of power and financial mismanagement by the bishop at a diocesan major seminary he opened in 2016.

*This story has been updated to correct a misspelling of a person's name.