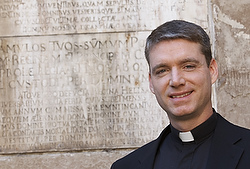 VATICAN CITY -- When Msgr. Daniel B. Gallagher was a microbiology major at the University of Michigan, his growing curiosity about the "deep questions" led the pre-med student to take philosophy and other humanities courses on the side.

By the time he graduated, he had discerned his vocation to the priesthood. He had also discovered the appeal of Latin.

"I had this thirst both for the language and what it conveyed, meaning the whole tradition of the West," he said.

Today, at 42, Gallagher is able to follow both of his callings as the only American on a seven-man team in the Vatican's Office of Latin Letters, which translates the most important Vatican documents into the church's official language. Among other challenges, his job entails concocting Latin words for modern inventions, such as discus rigidus for "hard drive" or aerinavis celerrima for "jet."

Some would argue that such efforts, however charming the results, are a pointless exercise in anachronism for a church with 1.2 billion members in practically every country on earth. Why not just replace the ancient tongue with the 21st century's international language, English?

To do so, Gallagher answers, would be to "sever us from everything that's preceded us." When Catholics pray in Latin, he said, "we put ourselves in a whole family of tradition," experiencing some of the same feelings as our ancestors in faith when they sang or recited the same words.

Making a modern language the lingua franca of the church would also undermine the unity of Catholics today, he argues, by privileging one part of the universal church over others. Latin is "everybody's language and nobody's language," Gallagher said. "No single race or ethnicity possesses" it.

Of course, Latin is now a much smaller part of the church's life than it was a generation ago. Its eclipse in Catholic worship, education and governance was just one of the many modernizing changes that followed the 1962-65 Second Vatican Council.

"Perhaps people associated [Latin] with a certain rigidity in the church, the church wasn't flexible and needed to be updated," Gallagher said, acknowledging that the "church really needed to connect to the world" at that time.

"But the changes happened so fast that people didn't realize what was being tossed out," he said. Thus, half a century later, "young people are experiencing a dryness at not being able to connect to what preceded us, both ecclesiastically but also simply historically in the West."

Gallagher said the church has "hit bottom" in terms of Latin knowledge among clergy, and the trend is now steadily upward. A quarter century ago, most seminaries were offering hardly any Latin instruction, he said; but in the last 10 years, future priests have shown a "tremendous increase" in desire to learn the language.

Pope Benedict XVI's decision to lift most restrictions on the traditional Latin Mass in 2007 certainly helped "spark interest" in liturgical use of the language, Gallagher said; but the current movement within the church is part of an even wider trend, reflected in the resurgent popularity of Latin classes at secular universities.

"Young people ... are searching to understand who they are and where they've come from, and themselves choosing to take Latin," he said.

That development offers a momentous opportunity for service, Gallagher said. As the primary custodian of Latin in the centuries since it ceased to be Europe's language of literature, law and scholarship, the Catholic church is singularly well-positioned to help others restore the linchpin that once held together a now-fragmented Western culture.

To that end, the Holy See is considering a plan for a Pontifical Latin Academy, which would promote the study of Latin, among other ways by sponsoring international conferences in conjunction with major secular universities and organizing intensive summer language courses.

Such activities would inevitably bring the Vatican into contact with non-Catholics, including atheists and agnostics, who share its interest in the classical heritage, Gallagher noted; and that would make the Latin academy a natural part of the new evangelization, Pope Benedict's project for reviving Christian faith in an increasingly secular West.

At a Synod of Bishops dedicated to the new evangelization next month in Rome, Cardinal Donald W. Wuerl of Washington, the synod's recording secretary, will deliver two addresses in Latin, and Gallagher said he hopes other bishops also choose to speak and even hold discussions in the language.

It might seem paradoxical that the church's attempt to reach out to the 21st century should involve recourse to an ancient tongue, but in Gallagher's view, nothing could be more fitting.

The de-Christianized European culture at which the new evangelization is principally aimed "grew out of a culture that was imbued with Latinity," he said. "So part of re-evangelizing that culture has to reconnect [Europeans] with Latinity in its large sense, not just the language but the whole human tradition in which the Christian message was presented 1500 years ago."