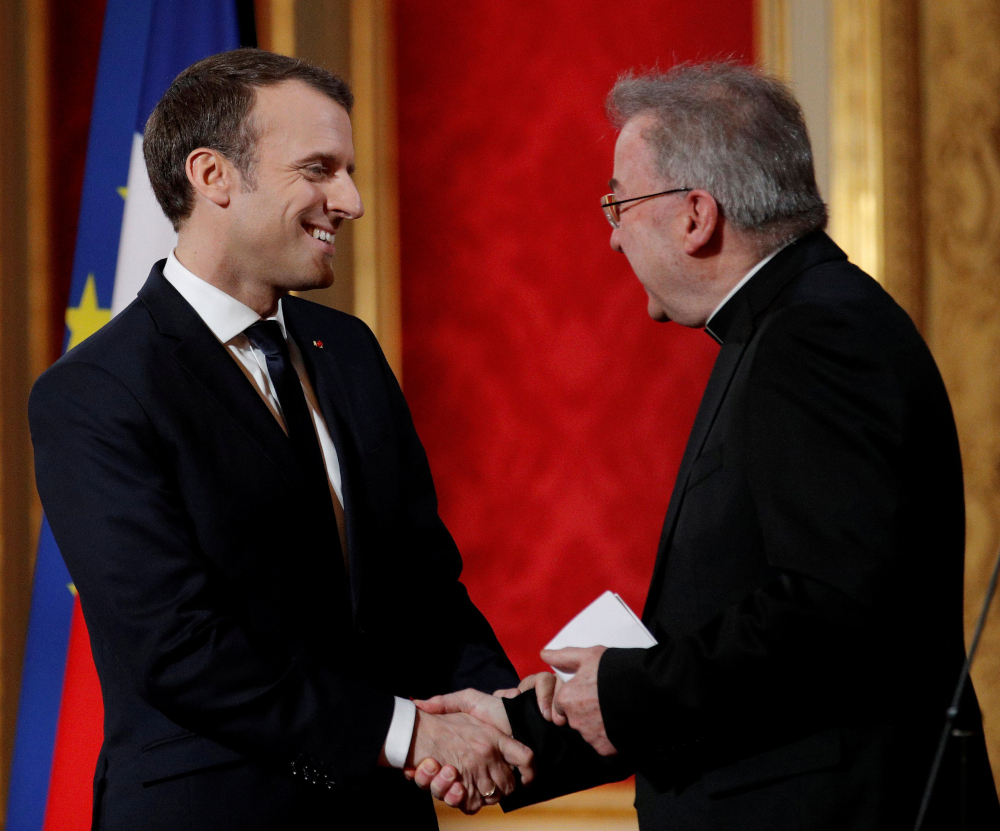 French President Emmanuel Macron greets Italian Archbishop Luigi Ventura as he presents his New Year wishes to members of the diplomatic corps at the Elysee Palace in Paris Jan. 4, 2018. The Vatican said it has lifted diplomatic immunity of the papal nuncio, who has been under investigation in France for allegedly sexually assaulting a city official. (CNS/Reuters/Yoan Valat)

The Holy See has waived the diplomatic immunity of a Vatican diplomat who has been under investigation by authorities in Paris for allegedly sexually assaulting a city official.

Alessandro Gisotti, interim director of the Vatican Press Office, said the move was an "extraordinary gesture" that underlined the diplomat's desire to fully cooperate with French authorities.

In January, prosecutors in Paris had launched a formal investigation into an allegation against Italian Archbishop Luigi Ventura, 74, a Vatican diplomat who has been representing the Holy See in France since 2009.

Gisotti confirmed July 8 that the Holy See had waived the diplomat's immunity in light of the criminal proceedings underway against him in France.

"The Holy See waited to make this decision until the conclusion of the preliminary stage" of the investigation, which the archbishop "freely took part" in before it wrapped up in late June, Gisotti said in a written communique.

Nathalie Loiseau, the former French minister of European affairs, demanded in March that, given the seriousness of the charges, the archbishop's immunity to be lifted so justice could be served.

"What matters is that the truth be known," she told CNews television in March.

The French newspaper Le Monde first reported that the diplomat was suspected of having sexually molested a young male employee at Paris City Hall Jan. 17, the day the mayor was giving her New Year's address to diplomats and other leading figures.

The French Catholic newspaper La Croix reported that the archbishop met with four of his accusers in May and denied their claims.

Before serving as apostolic nuncio to France, Ventura was the Vatican's representative in Canada from 2001 to 2009, helping with preparations for St. John Paul II's visit to Toronto for World Youth Day in 2002.

A Vatican nuncio plays an important role in compiling recommendations to the pope concerning the appointment of new bishops and archbishops in the country he is placed.