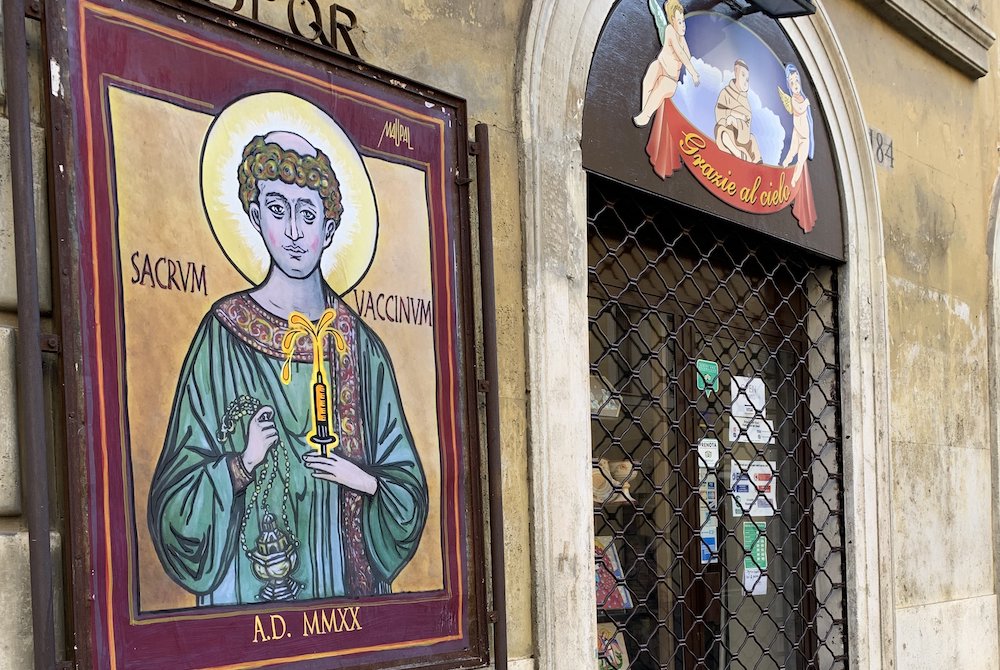 A poster of St. Stephen holding a "Holy Vaccine," by the Rome street artist known as Maupal, is seen near the Vatican Dec. 11. (CNS/Cindy Wooden)

The Vatican will begin a campaign to provide its small population of residents and staff members with new coronavirus vaccines "in the first months" of 2021, the head of the city-state's health department said Dec. 11.

Andrea Arcangeli, director of the Vatican Governorate's health and hygiene department, told official state outlet Vatican News that the city-state will first offer the Pfizer/BioNTech vaccine, which the U.S. Food and Drug Administration is expected to shortly approve for emergency use.

Arcangeli did not say how the Vatican had sourced the vaccine or how many doses it will have available, but said he considered it the city-state's "duty" to offer it to all of its residents, staff members and their families.

"We think it is very important that even in our small community we start as soon as possible a vaccine campaign," said Arcangeli. "Only through a widespread vaccination campaign will we see real advantages in terms of public health and will the population be able to obtain control over the pandemic."

The Vatican press office did not immediately respond to NCR inquiries about how the Vatican had sourced the vaccine and how the city-state would prioritize distribution of inoculations.

Italy has yet to officially announce when it might be able to begin vaccinating its own population, but it is expected to begin in January. The EU's European Medical Agency is scheduled to conclude its assessment of the Pfizer vaccine by Dec. 29.