A Vatican office has acknowledged that the Catholic Church erred over previous decades in asking its members to keep silent when they heard about priests fathering children.

"Before our times, the Church did like most institutions and avoided addressing publicly matters regarding its members' behavior, about which it kept silent," Norbertine Fr. Bernard Ardura, president of the Pontifical Committee for Historical Sciences, said in a document published last week.

"This was a mistake, which can be explained by the context, but it remains a mistake," said Ardura. 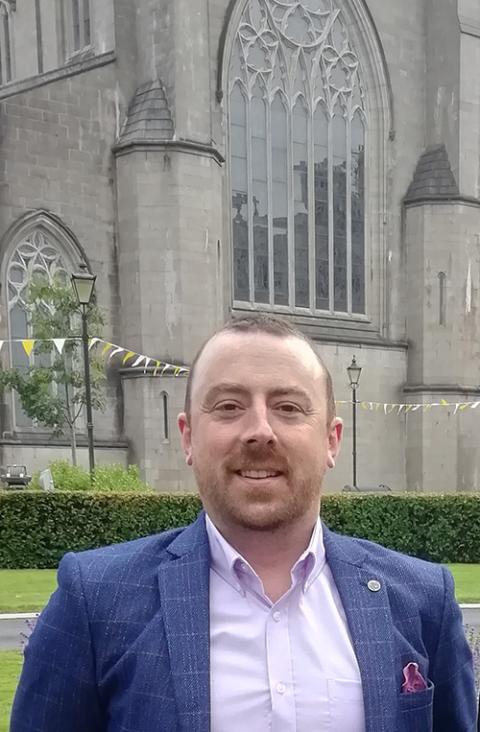 Vincent Doyle, the child of a priest and the leader of Coping International, a global campaign for the recognition of priests' children (Provided photo)

The priest, whose office is responsible for fostering cooperation between the Vatican and outside historians, was writing in a letter to Vincent Doyle, the child of a priest in Ireland and the leader of Coping International, a global campaign for the recognition of priests' children. Doyle's organization has posted the letter, written in French, on its website.

"I sent the questions to the Pontifical Committee of Historical Sciences mainly because ... it is especially important to acknowledge officially the misdeeds of the institutions in the past that has lasted and continued for centuries," Doyle said in an NCR interview.

Acknowledging this mistake is the first step toward correcting it, said Doyle.

"When, for the first time in its 2,000-year history, the church examines this question, it is fulfilling its mission, which is not only a mission of charity, but also a mission of justice," he said. "Thus, not only is this Vatican-led acknowledgment historic, but more importantly it is the right thing to do; indeed, it is the Catholic thing to do."

Ardura told NCR in a brief interview that he decided to respond to Doyle as a matter of principle, wanting to respond to a person asking him questions.

"In this case, a lot of suffering is at stake and a lot of wounds take a long time to heal," said the priest. "I consider it a priority to express my closeness concretely, while trying to understand from a historical point of view how and why the institution took its [former] position."

"We have to accept our history in all its aspects and it is not always easy," said Ardura.

In answer to one of Doyle's questions, Ardura admitted in his letter that the silence surrounding priests' children had harmful consequences. He stressed however that, on the local level, a lot of dioceses and religious congregations helped the children financially or in other ways.

"Alas, this doesn't take away their suffering, but it shows real compassion," said the priest.

Asked what allowed the church to ignore the reality of priests who fathered children for so long, Ardura replied that this choice was "guided by the conviction that scandal was to be avoided as much as possible, fearing it would erode the trust toward members of the clergy."

"Today, we recognize with Pope Francis that it was certainly a mistake, considering our current criteria, based on truth and a certain demand to communicate the truth," said Ardura.

Is this statement a first step toward solving this issue of the fate of these children? "The church has to address this question, since it is not going to go away," said Doyle. "There will always be children of priests, all over the world."

"They all need recognition, respect and love, like any other creature of God," he said.

According to the latest Vatican figures, there are about 414,000 Catholic priests across the world. Although there is no firm figure for the numbers of children of priests, Doyle has previously said his group counts some 50,000 users in 175 countries.

So, what is the next step? The pope needs to recognize publicly the existence of these children, said Doyle.

"A pope must say the words, 'Children of the ordained must be respected, loved, cared for, not neglected in any way,' " Doyle said.

"I am challenging the pope," Doyle said. "If I didn't believe in him, I would not put this challenge to him, with respect and humility."

"We desperately need a sitting pope to have the spiritual courage to acknowledge us ... just as he has acknowledged so many other marginalized groups," he says. "This 2,000-year-old silence has created a loneliness that penetrates the heart of each child conceived."

Doyle, a practicing Catholic, stresses he has faith in Francis, whom he met personally in Rome in June 2014.

But Doyle doesn't think that once a priest admits to fathering a child he should automatically be laicized, especially if it means he, the child and the mother will then live in poverty.

He suggests the Vatican create a commission dedicated to the issue of children of priests and that every case should get proper attention and a unique answer.

In his new book, titled Our Fathers, Doyle argues that abolishing priestly celibacy is not necessarily the right answer. The idea of ordaining "viri probati," married men who may already have children, is probably the solution, he says.

A version of this story appeared in the Feb 19-March 4, 2021 print issue under the headline: Vatican office admits silence about children of priests was a mistake.