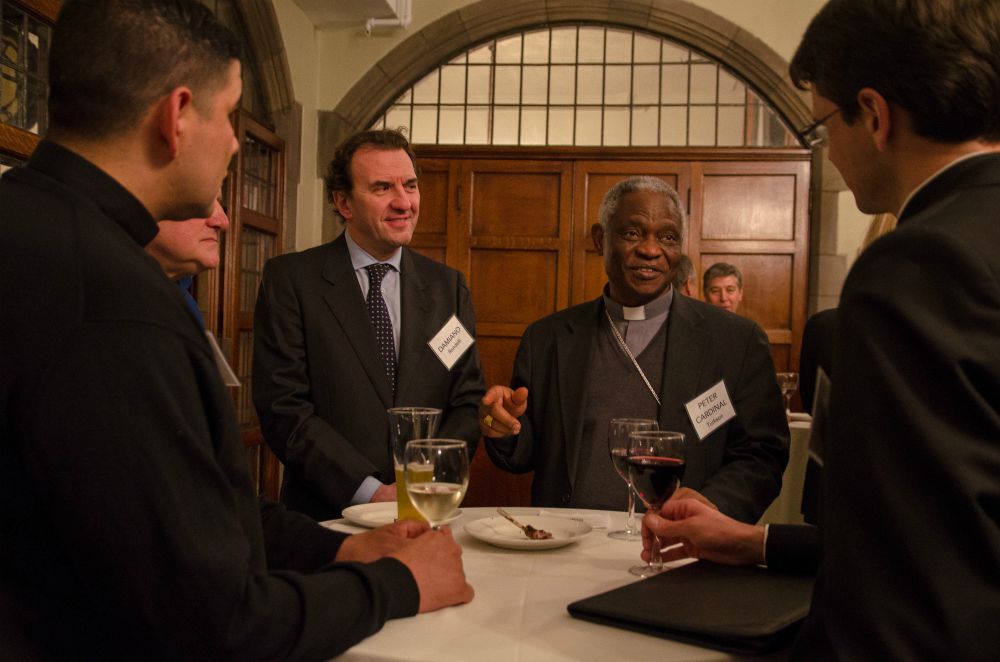 Dr. Damiano Rondelli, a professor at the University of Illinois College of Medicine, left, and Cardinal Peter Turkson, prefect of the Dicastery for Promoting Integral Human Development, talk at a reception March 20 during the ninth annual conference on economics and Catholic social thought at the University of Chicago. (Lumen Christi Institute)

Financial markets must serve the human person, rather than human beings being reduced to serving markets, a Vatican official told a conference at the University of Chicago — notably the birthplace of a strand of neoclassical economics that emphasizes the value of free markets.

"Local and global economics must be viewed not only in terms of production and distribution, but also in terms of their effect on the environment, the dignity of people and the way it ensures their well-being," said Cardinal Peter Turkson, prefect of the Dicastery for Promoting Integral Human Development.

Decisions about managing resources and investment raise moral questions for individuals and society, and can "give proof of our Christian identity and life of discipleship," he said.

The prelate from Ghana was part of a panel on "Financial Markets and Moral Inquiry" at the ninth annual conference on economics and Catholic social thought March 20-21. The event was sponsored by the Lumen Christi Institute, a center of Catholic faith and thought at the university, which started the series after the 2008 global economic crisis.

Turkson drew from the Vatican's 2018 document on economics and ethics " 'Oeconomicae et pecuniariae quaestiones.' Considerations for an ethical discernment regarding some aspects of the present economic-financial system," which summarizes Pope Francis' economic vision and grounds it the thought of Popes John Paul II and Benedict XVI.

Like the document, Turkson held up Catholic social teaching while raising concerns about an economic philosophy that reduces business to only maximizing profit, people to factors of production, and human well-being to the acquisition of commodities.

Instead, he argued, business is a vocation, something God calls people to do. "Business people are actually co-creators with God," he said.

Turkson also challenged a view of economics as pure science divorced from ethics in which "if something is not illegal and seems to promote growth, then it is ethical to do it."

Ethics in economics must present an alternative to the view that sees people as either producers or competitors, and that commodifies human well-being in a way that "the more one has, the more one is supposed to be happy," he said.

Such a view "diminishes the character of the human person" and does not promote a life of community and cooperation, the cardinal said. It also leads to "questionable practices," such as off-shore banking, that are "not good for humanity."

Instead, business people should consider the common good, Turkson said. 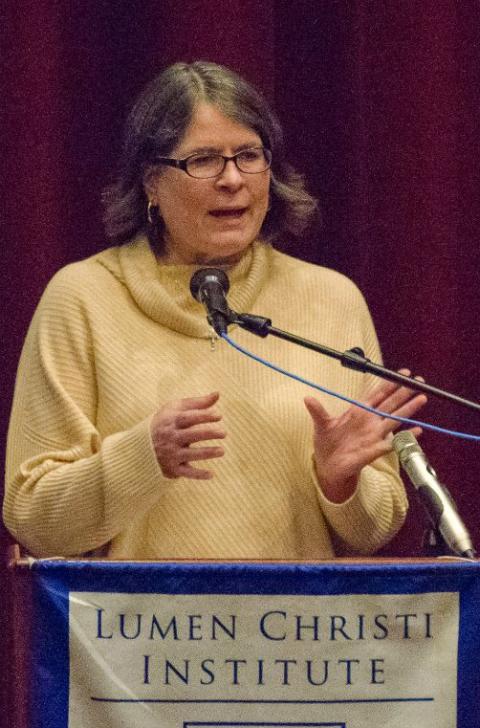 Other speakers on the panel were more supportive of free market economic philosophy. Christopher Giancarlo, chair of the U.S. Commodity Futures Trading Commission, defended derivatives, credit default swaps and other economic practices, explaining their "value proposition" of mitigating risk if used properly. He also thought nuance was needed in the Vatican document's critique of profiting from speculation, the ruin of others and "information asymmetry."

But Mary Hirschfeld, associate professor of economics and theology at Villanova University, said merely regulating the excesses of some business practices is not enough to weaken the excessive desire to maximize profit and to strengthen the importance of the common good.

Regulation is necessary, she said, especially as culture has normalized the "pursuit of more" as morally neutral or even as a good.

"If my goal in life is to maximize as much as I can, then I'm going to feel constrained by abstract ethical considerations and will have a tendency to discount them," Hirschfeld said. "So when you talk about the common good, I'll nod along and think that's nice, but when I get back in the pit to go trading, it's probably not the first thing I'm going to be thinking about."

In addition to regulations, however, Hirschfeld called for businesses to consider the church's teaching about a "richer and truer" type of human happiness. Rather than seeking to satisfy humans' "infinite hunger" in the "pursuit of more," the church says it can only be filled by God, or, secondarily, by "higher" human goods, such as relationships, the search for truth and beauty, and the development of one's own human potential, she said.

Hirschfeld said business — like all human endeavors — should be oriented toward these higher goods, with the ultimate goal being to provide goods and services and to help the common good — not to create profit. Profits can be an "instrumental good," but not the ultimate point, she said.

But panel moderator Maureen O'Hara, professor of finance at Cornell University, thought Hirschfeld's comments were a "somewhat of a downer for those of us in finance."

"If financiers do their job well, then they should, in principle, make the pie bigger for everyone. The system should work better," O'Hara said, adding that finance "can be both ethical, moral and good for society."