Vatican official speaks of a 'strategy of reconciliation' with women religious 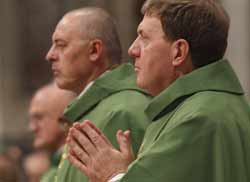 ROME -- Rome must acknowledge the “depth of anger and hurt” provoked by a visitation of American nuns, the Vatican’s number two official for religious life has said, saying it illustrates the need for a “strategy of reconciliation” with women religious.

Archbishop Joseph Tobin, Secretary of the Vatican’s Congregation for Institutes of Consecrated Life and Societies of Apostolic Life, said that he does not expect any “punitive” fallout from the visitation, and that before any decisions are made, women’s communities should have a chance to know the results and to respond.

That addresses a central concern of many women religious, who have objected to what some perceive as the secrecy of the process. Tobin said that as a matter of “justice and charity,” he will “strongly advocate” for feedback and a right of reply.

Tobin’s comments on the visitation came in a Dec. 6 interview with NCR in Rome.

| Vatican official speaks of a 'strategy of reconciliation' with women religious