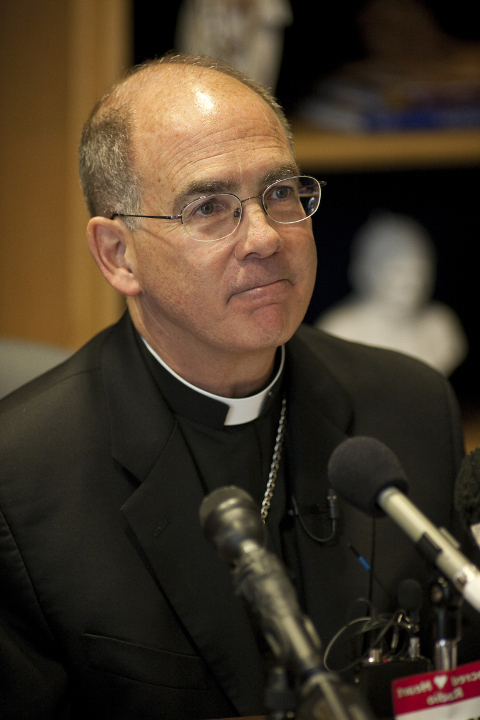 The Vatican's Congregation for the Doctrine of the Faith has ordered the largest leadership organization for U.S. women religious to reform its statutes, programs and affiliations to conform more closely to "the teachings and discipline of the Church."

The Vatican also said Wednesday it has appointed Seattle Archbishop Peter Sartain to oversee the Leadership Conference of Women Religious (LCWR), which has been the subject of a "doctrinal assessment" by the Vatican congregation since 2009, and has given him power to review and revise the organization's policies.

The news came in a press release Wednesday morning from the U.S. bishops' conference, which was accompanied by an eight-page document of the doctrinal congregation and a one-page statement from Cardinal William Levada, prefect of the congregation.

According to the document from the congregation, Sartain is to be given authority over the group in five areas, including:

According to the letter, Sartain's mandate runs for "up to five years, as deemed necessary." Sartain is also expected to set up an advisory team including clergy and women religious, to "work collaboratively" with LCWR officers and to "report on the progress of this work to the Holy See."

"In this way, the Holy See hopes to offer an important contribution to the future of religious life in the Church in the United States," the letter states.

According to the U.S. bishops' release, Bishop Leonard Blair of Toledo, Ohio, and Bishop Thomas John Paprocki of Springfield, Ill., will work with Sartain.

Although LCWR officers did not immediately return requests for comment on this story, a former leader of the group told NCR that the appointment and the order for the group to revise itself was "actually immoral."

"Within the canonical framework, there is only one way I can see to deal with this," said Benedictine Sr. Joan Chittister, who has served as president of the group as well as in various leadership positions. (Chittister also writes a column for NCR.) "They would have to disband canonically and regroup as an unofficial interest group.

"That would be the only way to maintain growth and nourish their congregational charisms and the charism of the LCWR, which is to help religious communities assess the signs of the time. If everything you do has to be approved by somebody outside, then you're giving your charism away, and you're certainly demeaning the ability of women to make distinctions."

The Vatican congregation's doctrinal assessment of LCWR started shortly after the Vatican's Congregation for Institutes of Consecrated Life and Societies of Apostolic Life announced a separate apostolic visitation of U.S. women religious orders. The results of that study were submitted to Rome in January.

Regarding the timeline, the document states the Vatican congregation was first presented with the results of the doctrinal assessment in January 2011 and decided then to examine what forms of "canonical intervention" might be available to address the "problematic aspects" it says is present in the organization, which the letter says are considered "grave and a matter of serious concern."

The document also states that Pope Benedict met with Levada two days after the meeting and at that point gave Levada authority to explore the "implementation" of the congregation's findings.

Citing a passage from the Gospel of Luke -- "I have prayed for you, Peter, that your faith may not fail; and when you have turned to me, you must strengthen the faith of your brothers and sisters" -- the document says the pope gave Levada the authority to show his "pastoral concern" for women religious, "who through the past several centuries have been so instrumental in building up the faith and life of the Holy Church of God."

In his letter Wednesday, Levada writes that Sartain's appointment is "aimed at fostering a patient and collaborative renewal of this conference of major superiors in order to provide a stronger doctrinal foundation for its many laudable initiatives and activities."

The document from the congregation re-emphasizes the reason for the doctrinal assessment, writing that Levada told LCWR leadership in 2008 that the congregation had three major areas of concern with the group:

The document cites an address by Dominican Sr. Laurie Brink, given at the 2007 LCWR assembly, and says that certain passages in it addressing how some members of religious congregations view their vocations indicated a "serious source of scandal."

"The Cardinal offered as an example specific passages of Sr. Laurie Brink’s address about some Religious 'moving beyond the Church' or even beyond Jesus," reads the document. "This is a challenge not only to core Catholic beliefs; such a rejection of faith is also a serious source of scandal and is incompatible with religious life."

The document states Levada has received letters from the leadership of several U.S. orders protesting church teaching on issues, including women's ordination and the proper ministry to homosexual people.

"The terms of the letters suggest that these sisters collectively take a position not in agreement with the Church's teaching on human sexuality," the document states. "It is a serious matter when these Leadership Teams are not providing effective leadership and example to their communities, but place themselves outside the Church's teaching."

The document also says certain LCWR presentations "risk distorting faith in Jesus and his loving Father who sent his Son for the salvation of the world" and "even undermine the revealed doctrines of the Holy Trinity, the divinity of Christ, and the inspiration of Sacred Scripture."

Ultimately, the document states that the doctrinal assessment undertaken by the congregation revealed a "two-fold problem" in the organization of "positive error" -- citing what it calls the "doctrinally problematic" statements at annual assemblies -- and of "silence and inaction ... in the face of such error."

The document notes specifically "the absence of initiatives" by LCWR members to promote the reception of the church's teaching, specifically mentioning Pope John Paul II's apostolic letter on the ordination of women, Ordinatio sacerdotalis.

The document also criticizes remarks by women religious that their disagreement with the church's official teaching on certain topics could be considered prophetic, writing that such a notion is "based upon a mistaken understanding of the dynamic of prophecy in the Church" that "justifies dissent by positing the possibility of divergence between the Church's magisterium and a 'legitimate' theological intuition of some of the faithful."

The review "seems all the more opportune" in light of the upcoming 50th anniversary of the opening of the Second Vatican Council, "whose theological vision and practical recommendations for Consecrated Life can serve as a providential template for review and renewal of religious life in the United States," the document states.

In his letter, Levada writes that the first step in the implementation of the findings will be a "personal meeting" between members of the congregation and LCWR leadership.

"Such a personal encounter allows for the opportunity to review the document together in a spirit of mutual respect and collaboration, hopefully thereby avoiding possible misunderstandings of the document's intent and scope," Levada writes.

Chittister said she was deeply distraught at news of Sartain's appointment and the order for LCWR to revise itself.

"When you set out to reform a people, a group, who have done nothing wrong, you have to have an intention, a motivation that is not only not morally based, but actually immoral," she said.

"Because you are attempting to control people for one thing and one thing only -- and that is for thinking, for being willing to discuss the issues of the age ... If we stop thinking, if we stop demanding the divine right to think, and to see that as a Catholic gift, then we are betraying the church no matter what the powers of the church see as an inconvenient truth in their own times."

In attempting to take such control of people's thinking, she said, "You make a mockery of the search for God, of the whole notion of keeping eyes on the signs of the times and of providing the people with the best possible spiritual guidance and presence you can give.

"When I was a child in this town, I was taught that it was a sin to go into a Protestant church.
In my lifetime, the church, to its eternal credit, admitted that it was wrong. The scandal and the sin is that it took 400 years to do that."

Chittister said women religious have been trying since Vatican II "to help the church avoid that kind of darkness and control ... they have been a gift to the church in their leadership and their love and their continuing fidelity.

"When you set out to reform that kind of witness, remember when it's over who doomed the church to another 400 years of darkness. It won't be the people of the church who did it."

Previous reporting from NCR on the Vatican's investigation of LCWR: