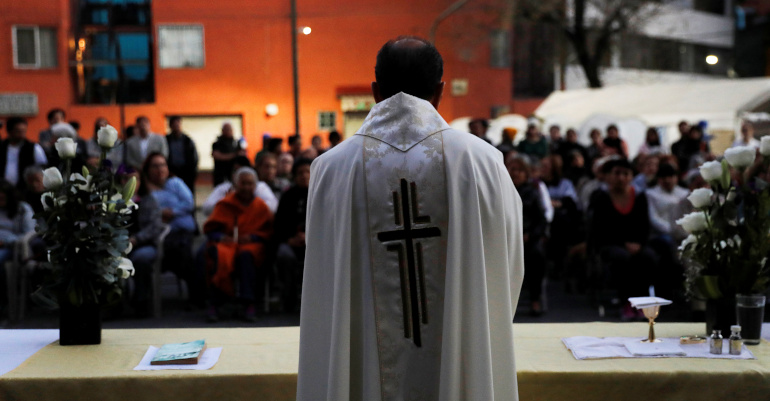 The Vatican reiterated July 20 that Catholic parishes should normally be led by priests, stressing to bishops across the world that arrangements for religious sisters or laypeople to head local parish communities can only be made when there is a shortage of ordained ministers.

In a new instruction meant to guide bishops who are undertaking parish reform efforts, the Congregation for Clergy emphasizes the Catholic Church's teaching that only a priest serving as a pastor can exercise "the full care of souls."

Arrangements for non-ordained people to lead parishes can be done only when there is a lack of priests, and "not for reasons of convenience or ambiguous 'advancement of the laity,'" the congregation states.

Further, it specifies: lay people appointed to such roles are "not directing, coordinating, moderating or governing the Parish." Those actions, it states, "are the competencies of a priest alone."

The new instruction, which was approved by Pope Francis on June 27, is titled: "The pastoral conversion of the Parish community in the service of the evangelizing mission of the Church."

Totaling about 22 pages, the text covers a wide range of material, including: the ways parish life has changed in past decades, how bishops should issue any decrees suppressing or erecting parishes, and what specific roles can be entrusted to priests, deacons, and laypeople.

In recent years, bishops across the U.S. have undertaken efforts to restructure or reduce the numbers of parishes in their dioceses, largely prompted by a decline in numbers of active priests. Data from the Center for Applied Research in the Apostolate (CARA) indicates that the number of Catholic priests in the country has nearly halved since 1970 -- dropping from about 59,000 to about 36,000.

Given the stark change in numbers, some U.S. bishops have occasionally appointed deacons, religious or laypeople to head up parishes in the absence of an available priest.

The Vatican congregation stresses that such arrangements should be considered "an extraordinary and temporary pastoral solution," and says that it is "preferable" to appoint deacons over professed religious or laypeople.

Interestingly, the new text comes only four months after Francis addressed the issue of lay leaders of communities in his apostolic exhortation Querida Amazonia ("Beloved Amazon"), which responded to last year's Synod of Bishops from the Amazon region.

In that document, the pope said the church across the nine-nation region requires "lay leaders endowed with authority and familiar with the languages, cultures, spiritual experience and communal way of life in the different places."

In a footnote to that paragraph, the pontiff referenced the Code of Canon Law, which says it is "possible that, due to a lack of priests, a bishop can entrust 'participation in the exercise of the pastoral care of a parish ... to a deacon, to another person who is not a priest, or to a community of persons.'"

The Congregation for Clergy oversees the world's priests and deacons who are not in religious orders. It is led by Italian Cardinal Beniamino Stella. Msgr. Andrea Ripa, an undersecretary, said in a statement that the office wished to provide the new instruction in response to "not a few bishops" who asked for guidance as they undertake parish restructuring.

Ripa said the document is not meant to create new law but "to apply the law already in force in a better way."

The priest also warned against two extremes in parish life: one, where a pastor makes all decisions on his own; and another, which "is a sort of 'democratic' vision, in which the Parish no longer has a Pastor, but simply functionaries -- clerical and lay -- who manage its different aspects in a way often described as 'corporate.'"

The congregation's document appears to have been drafted primarily before the outbreak of the coronavirus pandemic, which has led many parishes to halt or limit in-person services in favor of livestreamed options.

The text begins by acknowledging that in many parts of the world Catholics are now less attached than they once were to individual parishes, choosing instead to attend church in a variety of places.

"With the Parish no longer being the primary gathering and social center, as in former days, it is thus necessary to find new forms of accompaniment and closeness," it states. "A task of this kind ought not to be seen as a burden, but rather as a challenge to be embraced with enthusiasm."

Turning to questions about how bishops can merge or suppress parishes, the congregation urges prelates to make such decisions "with flexibility and gradualism," recognizing that people often have sentimental attachments to their communities and even to church buildings.

The congregation also reminds bishops that in order to suppress a parish they must issue a formal decree, and should not suppress more than one parish in the same decree.

The text repeatedly stresses the unique authority entrusted in the pastor of a parish. In one example, it notes that while parishes often have pastoral councils, those bodies are only consultative and "proposals must be accepted favorably by the Parish Priest to become operative."

The document even discourages pastors from adopting new titles. "Appellations such as 'team leader' … which convey a sense of collegial government of the Parish, are to be avoided," it says.

The text likewise notes that deacons, religious or laypeople who are given roles of responsibility in a parish cannot be designated "pastor," "co-pastor," "chaplain," "moderator," "coordinator," or "parish manager."

For deacons, it suggests terms such as "Deacon Cooperator," or "Pastoral Associate."

A version of this story appeared in the Aug 7-20, 2020 print issue under the headline: Vatican: Priests, not laity, should lead parishes.