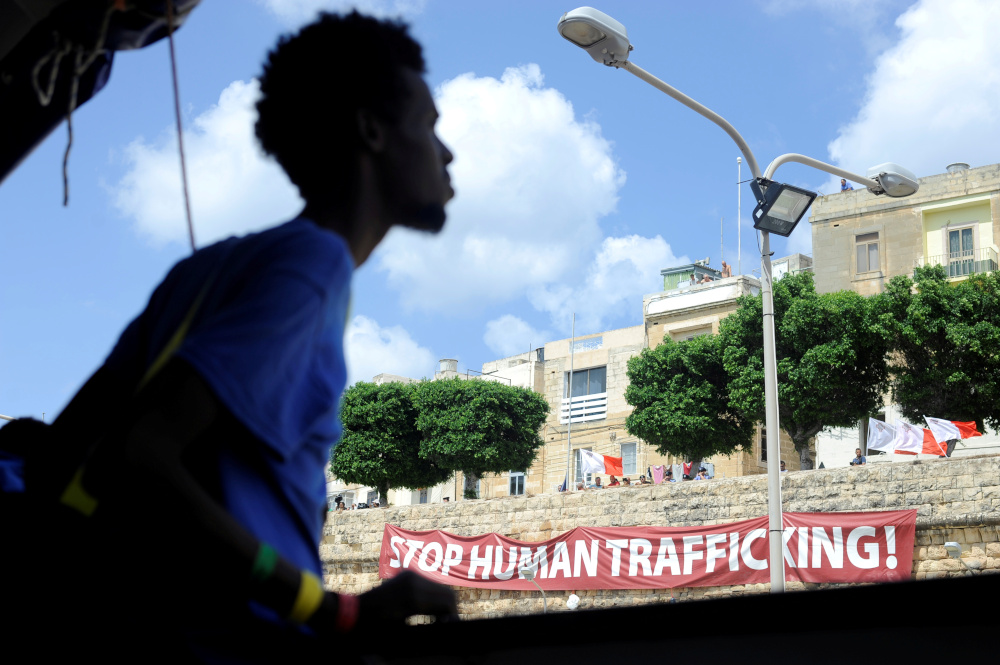 A man walks past a banner reading "Stop human trafficking" in 2018 in Valletta, Malta. The Vatican has created a set of pastoral guidelines to inspire and improve the church's work in addressing the crime of human trafficking and the care of its victims worldwide. (CNS photo/Guglielmo Mangiapane, Reuters)

The Vatican has created a set of pastoral guidelines to inspire and improve the church's work in addressing the crime of human trafficking and the care of its victims worldwide.

The Migrants and Refugees Section of the Dicastery for Promoting Integral Human Development released its "Pastoral Orientations on Human Trafficking" Jan. 17 at a Vatican news conference.

"Pope Francis' insistent teaching on human trafficking provides the foundation for the present pastoral orientations which draw also from the longstanding practical experience of many international Catholic NGOs working in the field and from the observations of representatives of bishops' conferences," the text said.

"While approved by the Holy Father, the orientations do not pretend to exhaust the church's teaching on human trafficking; rather, they provide a series of key considerations that may be useful to Catholics and others in their pastoral ministry, in planning and practical engagement, in advocacy and dialogue," it said.

The Migrants and Refugees Section also released a separate publication, "Lights on the Ways of Hope," which compiles Pope Francis' teachings on migrants, refugees and human trafficking.

"Its purpose is similar to that of the 'Compendium of the Social Doctrine of the Church,' to serve one and all as an instrument for the moral and pastoral discernment of the complex events" concerning the movements of people today, and as "a guide to inspire" people to look to the future with hope, the book's introduction said.

The nearly 500-page volume collects more than 300 complete or excerpted speeches, messages and reflections by the pope on the three themes.

Additionally, the collection is available online at https://migrants-refugees.va/resource-center/collection/ with a robust search engine to help people who are looking to study more in-depth what the pope has said, Scalabrinian Father Fabio Baggio, the section's undersecretary, said at the news conference.

While the printed volume compiles Pope Francis' teachings from 2013 to the end of 2017 in Italian and English, the online version will offer other languages and be updated with more recent talks by Pope Francis as well as the teachings of Pope Benedict XVI and St. John Paul II on migrants, refugees and human trafficking, said Jesuit Father Michael Czerny, the section's other undersecretary.

While the collected teachings offer a more academic service, the pastoral guidelines on human trafficking have the specific aim of inspiring action, aiding current efforts and reaching the long-term goal "to prevent and ultimately dismantle this most evil and sinful enterprise of deception, entrapment, domination and exploitation," Father Czerny said.

The International Labor Organization estimates there are more than 40 million victims of human trafficking around the world. It estimates 81 percent of victims are trapped in forced labor, 25 percent are children and 75 percent are women and girls. It also estimates that the trafficking of human beings for forced labor or sexual exploitation generates $150 billion a year, making it the third-largest crime industry in the world behind drugs and arms trafficking.

The complex and global nature of human trafficking requires a global and multidisciplinary response, the guidelines said.

"The booklet will help the church play its important role in this struggle," Father Czerny said, also announcing his office will host a three-day conference in April at the Vatican to discuss implementing the guidelines.

The orientations are "offered to Catholic dioceses, parishes and religious congregations, schools and universities, Catholic and other organizations of civil society and any group willing to respond," he said.

"They are for planning and evaluating practical pastoral engagement as well as advocacy and dialogue," adding that many of the points "should be read as proposals for policy" for governments.

"It is up to citizens to make it clear to their state that this is something that is going on within our borders" and requires action by the state, which is ultimately responsible for protecting the human rights and security of those within its borders, Father Czerny told reporters.

One area of concern, he said, is that the large numbers of migrants and refugees moving across borders are providing "fertile ground" for traffickers.

Looking specifically at North America's border concerns regarding "caravans" of people escaping Central and South America, he said it is "very important to see that migration policy and trafficking are linked."

"The more difficult you make it for people to move, the more likely they are to be trafficked so that is a very important consideration if we are really concerned about human rights and human dignity," said Father Czerny.

While the church has been actively engaged on multiple levels and places in the fight against trafficking for many years, "this handbook is really the first coherent publication pulled together" on the subject, making it "an important step" in this battle, he said.

The guidelines present pertinent quotes and teachings from Pope Francis and detailed input from church leaders, scholars and experts working in the field of trafficking.

It concludes, he said, with action guidelines addressing, "What can be done to alleviate and eliminate human trafficking? How can it be done better?"

The 40-page booklet is available at https://migrants-refugees.va/resource-center/documents/ in formats suitable for professional reprints or for sharing online.