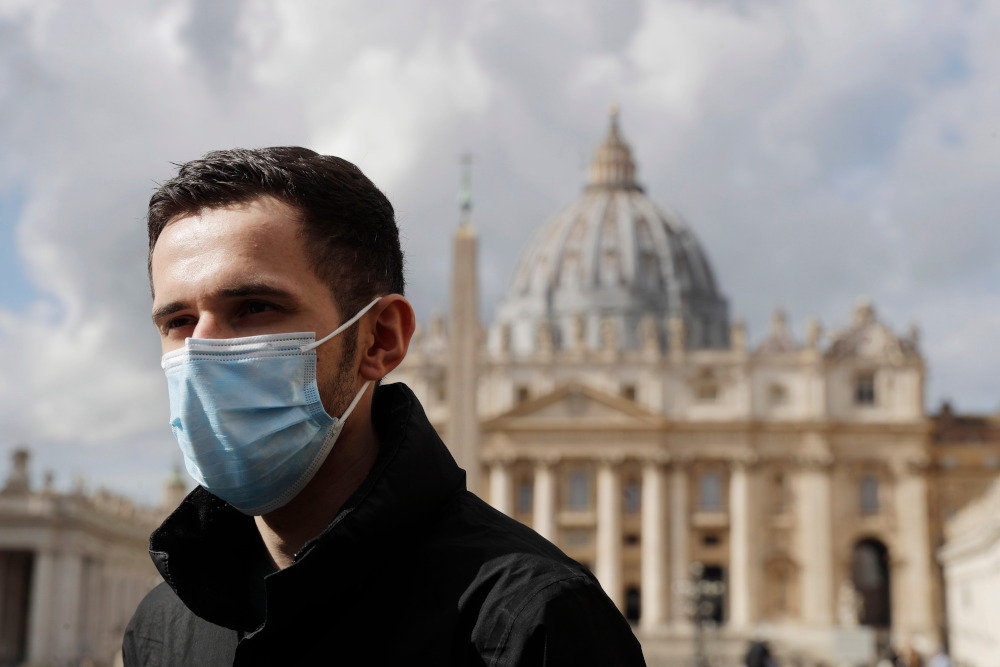 Whistleblower Kamil Jarzembowski meets journalists outside St. Peter's Square at the Vatican, Wednesday, Oct. 14, 2020. Two priests are going on trial in the Vatican’s criminal tribunal this week, one accused of sexually abusing an altar boy who served at papal Masses in St. Peter’s Basilica, and the other accused of covering it up. The proceedings starting Wednesday were forced on the Holy See after victims and Jarzembowski went public in 2017. (AP/Gregorio Borgia)

The case concerns the closed world of the St. Pius X youth seminary, a palazzo inside the Vatican walls just across the street from where Pope Francis lives and the criminal tribunal itself. The seminary, which is run by a Como, Italy-based association of priests, serves as a residence for boys aged 12 to 18, who serve as altar boys at papal Masses in St. Peter's Basilica.

The former seminary rector, the Rev. Enrico Radice, is charged with having helped Martinelli avoid investigators by telling the Como bishop that the victim's allegations were baseless and telling Vatican prosecutors that he knew of no sexual misconduct in the seminary.

Both men appeared in the courtroom Oct. 14, wearing masks as part of the Vatican's anti-coronavirus restrictions, and huddled with their lawyers after the brief, eight-minute hearing. Neither has responded publicly to the accusations. The next hearing was scheduled for Oct. 27, when both defendants are expected to take the stand.

The charges suggested that Radice's alleged cover-up went beyond what was previously known and put into question Martinelli's very ordination. Prosecutors said Wednesday that Radice not only helped Martinelli evade investigators in the years prior to becoming a priest, but also falsified a letter from the Como bishop announcing Martinelli's imminent ordination.

The scandal is particularly grave because the abuse allegedly occurred within Vatican City itself, and the allegations were known since at least 2012 but were covered up by the Vatican and other church authorities until the victim and his roommate went public in 2017.

Their stories greatly undermined Pope Francis' pledges of "zero tolerance" for abuse because the alleged crimes occurred in his own backyard and had gone unpunished for years. Eventually though, Francis waived the statute of limitations in the case and signed off on a new policy for Vatican City requiring such crimes to be reported to Vatican prosecutors.

The key whistleblower in the case, Kamil Jarzembowski, said he wrote Francis and other church authorities several letters over the years detailing what he had seen as the roommate of the alleged victim, but never received a reply: He reported seeing his roommate repeatedly molested by Martinelli at night when Martinelli would enter their dorm room. He has said the molestation began when both were minors and continued after Martinelli turned 18.

"It was terrifying seeing these things because at the time I was 15. I had never even seen two people having sex and yet I was forced to watch these things inside the Vatican," Jarzembowski told The Associated Press on Wednesday.

The Polish-born Jarzembowski, once a devout altar boy, was kicked out of the seminary after he reported the misconduct to the archpriest of St. Peter's Basilica, and said he has since lost his faith entirely in the church and God.

"Psychologically it was pretty tough to take because I came to the Vatican to serve the church. I was a believer," he said. "And yet at night I was forced to look at these scenes, with the blackmail that if I talked, I would suffer consequences."

Usually, if it investigates sexual abuse at all, the Catholic Church prosecutes accused priests according to the canon law, the church's in-house legal system that can impose a maximum penalty of defrocking.

In this case, because the alleged crimes occurred within the confines of Vatican City, the city state's criminal prosecutors also have jurisdiction and decided to charge the two priests in what is believed to be the first trial of its kind in the Vatican tribunal.

The case though is emblematic of the inherent conflicts of interest in the canon law system, where Jarzembowski's allegations were initially quashed after bishops declared them unfounded.

Bishops and religious superiors are tasked with investigating such allegations of abuse, but they have an inherent conflict of interest in favor of the accused priests since they often have invested time and money in the priests' training and need them to fill Mass schedules and perform pastoral work.

In this case, the charges against Radice suggest that he wanted see Martinelli ordained a priest at all cost, despite the allegations against him. Both men are affiliated with a small Como-based association, the Opera Don Folchi, which runs the youth seminary and needs a constant supply of new young priests to keep it going.

The group has lashed out at the allegations against Martinelli and its seminary as "mud," a "violent attack on the church" and nothing more than "calumny and falsifications."