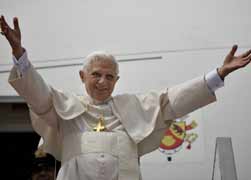 Benedict in the doorway of his plane as he leaves Cameroon March 20. (CNS/Reuters)

Pope Benedict XVI is notoriously a study in contrast with his extroverted predecessor, John Paul II. One vintage John Paul touch was to play his own biography, as a son of Poland whose youth straddled the Nazi occupation and the rise of Communism, like a musical instrument. That's something Benedict has long been reluctant to do, even though his own experience under the Nazis was, in many ways, equally dramatic.

Today in Angola, however, Benedict XVI had what can only be described as a "John Paul moment."

Aware that he was speaking to a country that experienced a civil war from independence in 1975 to 2002, leaving an estimated 500,000 people dead, Benedict reached into his own past to connect.

"I come from a country where peace and fraternity are dear to the hearts of all its people -- in particular those, like myself, who have known war and division between family members from the same nation, as a result of inhuman and destructive ideologies. Under the false appearance of dreams and illusions, [they] caused the yoke of oppression to weigh down upon the people," he said during an arrival ceremony at the Luanda airport.

"You can therefore understand how keenly aware I am of dialogue as a way of overcoming every form of conflict and tension, and making every nation -- including your own -- into a house of peace and fraternity," the pope said.

The seriousness of that message was only slightly undercut by the fact that it was a blustery day in Luanda, and at one point while he spoke a gust of wind swept the white zucchetto, or skullcap, off the pontiff's head.

Benedict's accent upon "peace and fraternity" seemed to set the tone for the first day of his visit to Angola, continuing the outward-looking tone that has so far dominated his March 17-23 visit to Africa.

There's been strikingly little "church-speak." Instead, Benedict has focused on bringing the gospel message into contact with Africa's political and social realities. Today brought perhaps the pope's hardest-hitting social message so far, in a nation where billions of dollars in annual oil revenues have done little to end endemic poverty. (Angola recently became the largest oil-producing nation in Africa and the eighth largest in the world.)

Upon his arrival in Luanda's airport at midday, the pope insisted that "the majority of Angolans who live below the threshold of absolute poverty must not be forgotten." Later, Benedict warned that the poor "must not become one of the casualties" of the current global economic crisis.

"The church, in accordance with the will of her divine founder, will always be found standing alongside the poorest of this continent," the pope said.

This afternoon, Benedict XVI addressed a group of politicians, civil leaders and diplomats, laying out a program for Africa: "Respect and promotion of human rights, transparent governance, an independent judiciary, a free press, a civil service of integrity, a properly functioning network of schools and hospitals, and -- most pressing -- a determination born from the conversion of hearts to exercise corruption once and for all."

After his return to Rome, Benedict XVI is expected to release a new encyclical letter on the church's social teaching, and in some ways his speeches in Africa offer a preview of that document's contents.

Turning to the role of the international community in Africa, Benedict called for:

•tAddressing climate change.
•tImplementation of the development goals of the Doha round of the World Trade Organization talks. (Though Benedict did not spell it out, issues include access to markets in developed nations and new mechanisms for developing nations to assert their rights under trade agreements);
•tHonoring what the pope called the "oft-repeated promise" of wealthy nations to commit 0.7 percent of their Gross National Product to development assistance.

Benedict also called for lifting "the special yoke of discrimination that women and girls often endure," including "sexual violence and exploitation." Yesterday in Cameroon, the pope mentioned genital mutilation, forced marriages, and a lack of protection of inheritance rights as issues that threaten women in Africa.

This afternoon, Benedict returned to another theme that surfaced repeatedly in Cameroon -- the defense of human life and opposition to abortion.

"How bitter the irony of those who promote abortion as a form of ‘maternal' healthcare!" the pope said. "How disconcerting the claim that the termination of life is a matter of reproductive health."

(A footnote to that remark referred to the "Maputo Protocol," adopted by the African Union in 2003. Article 14 guarantees access to abortion "in cases of sexual assault, rape, incest, and where the continued pregnancy endangers the mental and physical health of the mother or the life of the mother or the fetus." Some African nations have not implemented the provision on the grounds that it clashes with traditional values as well as national law.)

The official motive for Benedict's visit to Angola is to mark the 500th anniversary of the arrival of Christianity, during the era of the Mbanza Congo kingdom. The monarch at the time, Alfonso I Mbemba-a-Nzinga, accepted baptism as a Catholic, and the kingdom became Africa's largest and strongest officially Christian state until it crumbled in the 18th century.

In a meeting this evening with the bishops of Angola and São Tomé, Benedict XVI applauded the transition to indigenous leadership in the African church. At the same time, he said he wanted to "pay homage to the work which has been patiently and heroically carried out by missionaries in proclaiming Christ and his Gospel, and in giving birth to the Christian communities for which you today are responsible."

Earlier this morning, Benedict XVI left Cameroon, exhorting Africans to "work to eliminate injustice, poverty, and hunger wherever you encounter it." The pope also recalled his meeting with Muslims, saying it should "strengthen our resolve to work together to proclaim the God-given dignity of the human person, a message that an increasingly secularized world needs to hear."

Before leaving the country, Benedict briefly greeted a delegation of indigenous persons, popularly known as pygmies, who presented the pontiff with a live turtle that Vatican officials said would be taken to Rome.

In general, the consensus in today's Cameroonian press was that Benedict's three-day trip was a triumph, in part because the pontiff seemed to distance himself from efforts by the government of longtime President Paul Biya to score political points. The Herald, an Anglophone paper, cited the pope's "veiled indictment of the Biya regime." Aurore Plus, a Francophone paper, showed the pope withholding communion from Biya, asking if he has denounced corruption, with Biya replying, "Confession wasn't on the agenda!"

In one sign of transition to a more full-throated democratic climate, however, not all the media joined in the chorus of praise. The Francophone tabloid Le Popoli, for example, ran a front-page cartoon showing Biya handing the pope a suitcase full of cash, symbolizing the money spent on the visit. The headline was "How the pope made his faithful poorer."

Though there were scattered references to the controversy triggered by Benedict's comments about condoms and AIDS, it did not loom especially large in most Cameroonian discussion. One paper, however, quoted the leader of a local anti-AIDS group: "The pope lives in Heaven, but we're here on earth. Out of 100 Catholics in Cameroon, 99 are using condoms."

Tomorrow, Benedict XVI will celebrate a Mass for bishops, priests, religious and catechists in Angola, and then hold a meeting with youth in a Luanda sports stadium. On Sunday, he will celebrate an open-air Mass in Luanda before meeting in the afternoon with movements involved in fighting for women's rights.

On Monday, Benedict XVI will return to Rome. His next foreign voyage will come in May, when he travels to Jordan, Israel and the Palestinian Territories.
(Allen is NCR senior correspondent. His e-mail address is jallen@ncronline.org.)