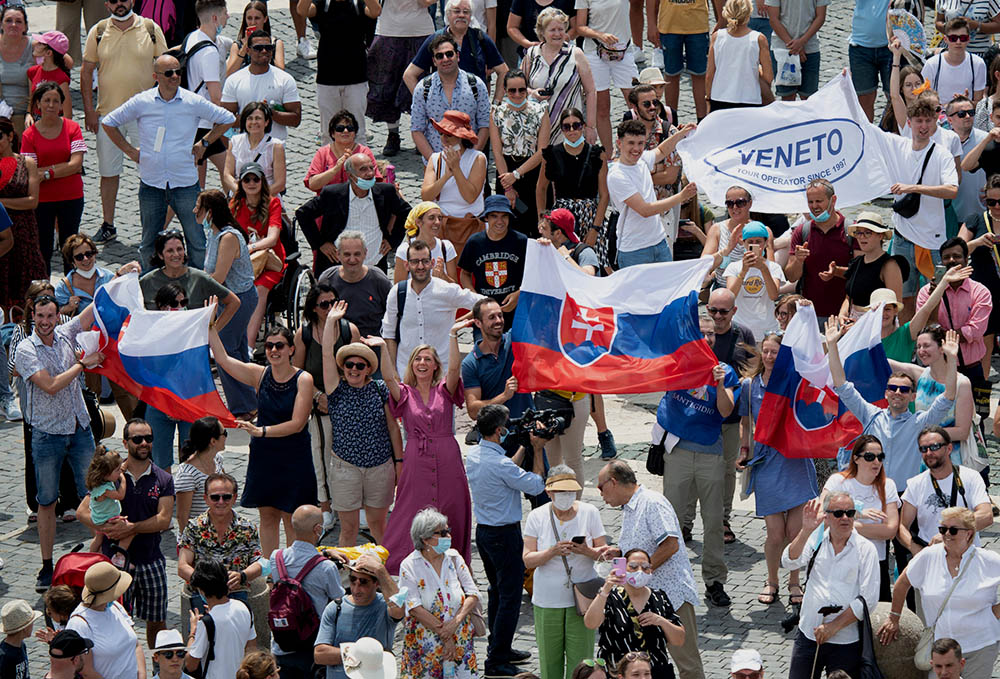 Pilgrims holding the Slovak flag cheer in St. Peter's Square at the Vatican July 4, 2021, as Pope Francis announces he will visit their country Sept. 12-15. (CNS/Vatican Media)

Since the fall of communism — when, in 1993, the country of Czechoslovakia split into the Czech Republic and Slovakia — the two nations have diverged dramatically when it comes to religion.

In 1991, 44% of Czech speakers in then-Czechoslovakia identified as Catholic. Today, according to Pew Research Center, that number has declined by more than half in the Czech Republic, with only 21% identifying as Catholic.

The religious landscape in today's Slovakia, by contrast, tells a different story, with 63% of the country identifying as Catholics. When Pope Francis visits the Central European country during his Sept. 12-15 trip to Hungary and Slovakia, one of his chief goals will be to shore up that faith in hopes that the country will not follow the same path as its western neighbor.

"The aim is not giving in to secularization," said Ines Murzaku, professor of religion at Seton Hall University. "In comparison to the Czech Republic, Slovakia has maintained high levels of religiosity after the fall of communism."

Murzaku, who was a United Nations accredited representative for the organization Christians Associated for Relationships with Eastern Europe, told NCR that central to the pope's mission will be to help keep the country's religion strong.

When Francis departs Rome on Sept. 12 — marking only his second trip since the COVID-19 lockdowns and the first since his 10-day hospitalization in July — his first stop will be the Hungarian capital of Budapest, where he will celebrate the closing Mass for the International Eucharistic Congress. 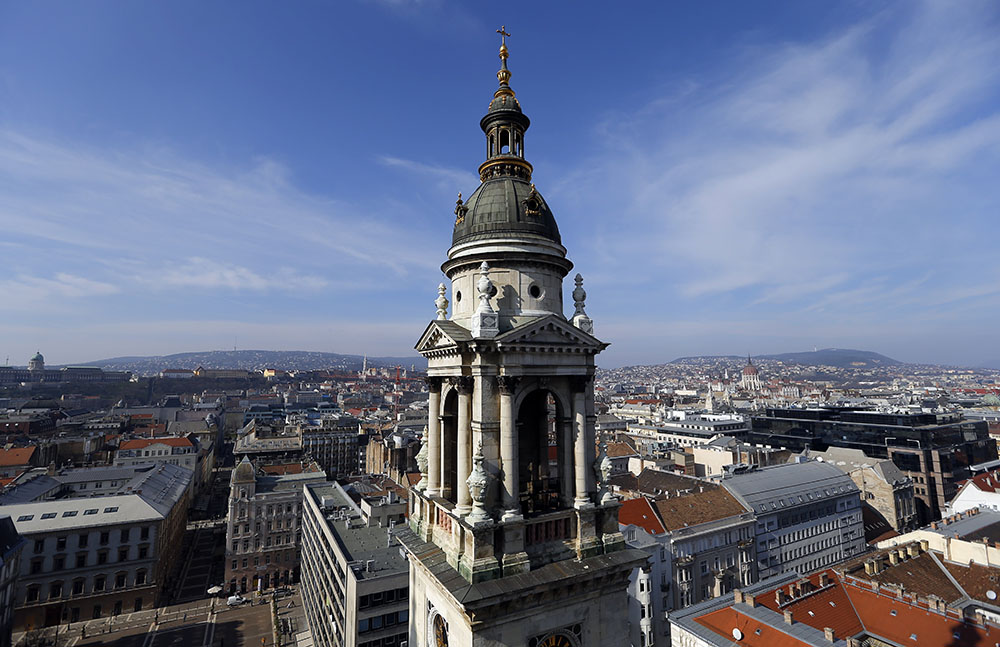 A part of the church is seen from the balcony of St. Stephen's Basilica in Budapest, Hungary, in 2016. (CNS/Reuters/Laszlo Balogh)

In addition, Francis will meet with the country's bishops and come face to face with Hungarian Prime Minister Viktor Orban, a figure whose strident nationalism and anti-immigrant stance has long put him at odds with a pope who has sought to promote global engagement and hospitality toward immigrants.

Yet in what seems to be an intentional effort on the part of the Vatican to downplay their differences, the pope will spend less than seven hours on the ground in Hungary before pivoting his focus from conflict to opportunity, where, in Slovakia, he will crisscross the country with an aim to spotlight interreligious dialogue, ecumenism and the possibility of collaboration, rather than isolationism.

Francis will touch down in Slovakia's capital of Bratislava on the evening of Sept. 12, marking the fourth visit of a pope to the country, following Pope John Paul II's visit in 1990 and return trips in 1995, just two years after the country separated from the Czech Republic, and again in 2003.

After the fall of communism, "there was a big restart or awakening of the church," recalls Pavol Rabara, a reporter for the conservative Slovak daily Postoj.

The country's newfound freedom meant that "seminaries were full of young men, many new churches and pastoral centers were built, many new projects started," he told NCR.

Thirty years later, he says that most churches remain full on Sundays and there are active Catholic lay movements, but the reality of secularism has set in, leading to a decline in new religious vocations, challenges to family life and poor catechesis.

Now, Francis is hoping the young democracy, which became sovereign in 1993 and only entered the European Union and NATO in 2004, can be anchored by an ancient faith.

To help get that message across, Francis will spend his three and a half days in the country trying to strengthen relations with the Eastern-rite Catholic Church, mending fences with the Orthodox believers, meeting with young people and, perhaps most movingly, visiting one of the country's greatest marginalized communities, the Roma (also known as Gypsies).

In many respects, that itinerary will look very similar to many of his past papal trips, but the realities of COVID-19 pose a number of challenges, both in terms of planning and potential turnout. 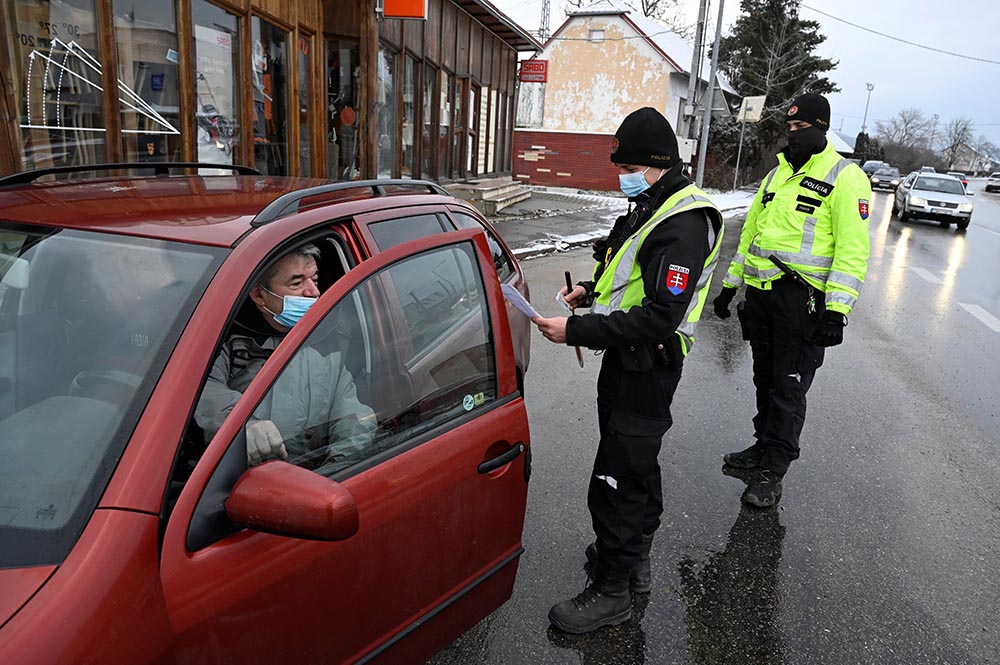 A police officer checks the negative COVID-19 test certificate of a person inside a car in Trencin, Slovakia, Jan 27. For Pope Francis' visit Hungary and Slovakia Sept. 12-15, realities of the pandemic pose challenges in terms of planning and potential turnout. (CNS/Reuters/Radovan Stoklasa)

Turnout may be affected by the government's original requirement that only fully vaccinated persons could participate in events, despite the pope's widespread popularity among Slovakians. A recent poll commissioned by Postoj found nearly 74% of the country expressing positive support for Francis.

After only 33,000 people, in a country of nearly 5.5 million, had registered to attend papal events, the government eased restrictions to also include admission to those who had recovered from COVID-19 or could present a negative test.

"It is good news but it is still unclear how the numbers will develop in the next few days," Rabara told NCR.

One individual who is energized about the pope's arrival is Peter Solej, a 34-year-old civic activist from Slovakia who helped establish the NAPS (Nostrae Activitates Pro-Slovakia) Institute, which promotes ecumenism through cultural initiatives.

"I come from a region where, after the period of communist persecution of the church in the last century, relations, especially between Catholic and Orthodox believers, were not very good," he told NCR. 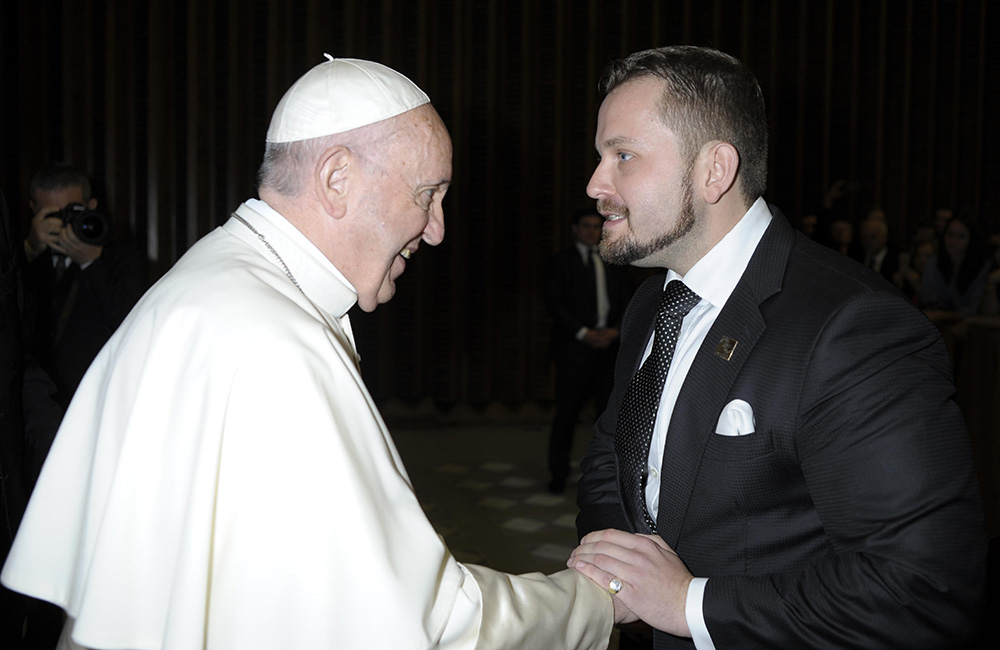 As a practical outreach, Solej organized an ecumenical concert, which has become an annual international initiative that "brings people together through art, deepens dialogue and promotes tolerance between nations and followers of different religious traditions."

In 2017, Cardinal Kurt Koch, who heads the Pontifical Council for Promoting Christian Unity, attended the concert and praised it as an example of practical ecumenism.

Solej believes that when Francis meets with Jewish leaders in Bratislava on Sept. 12 or when he celebrates Mass in the Byzantine liturgy of St. John Chrysostom in Presov Sept. 13, it will help refuel both interfaith and ecumenical activities at a time the country could benefit from strengthening its social fabric.

"First and foremost,'' said Solej, "we are all children of God, children on the way to the Father, and each of us has a unique dignity and mission."

Drawing on the words of Czech Cardinal Dominik Duka, Solej says that "ecumenism is not just a matter for the authorities, but for all of us." 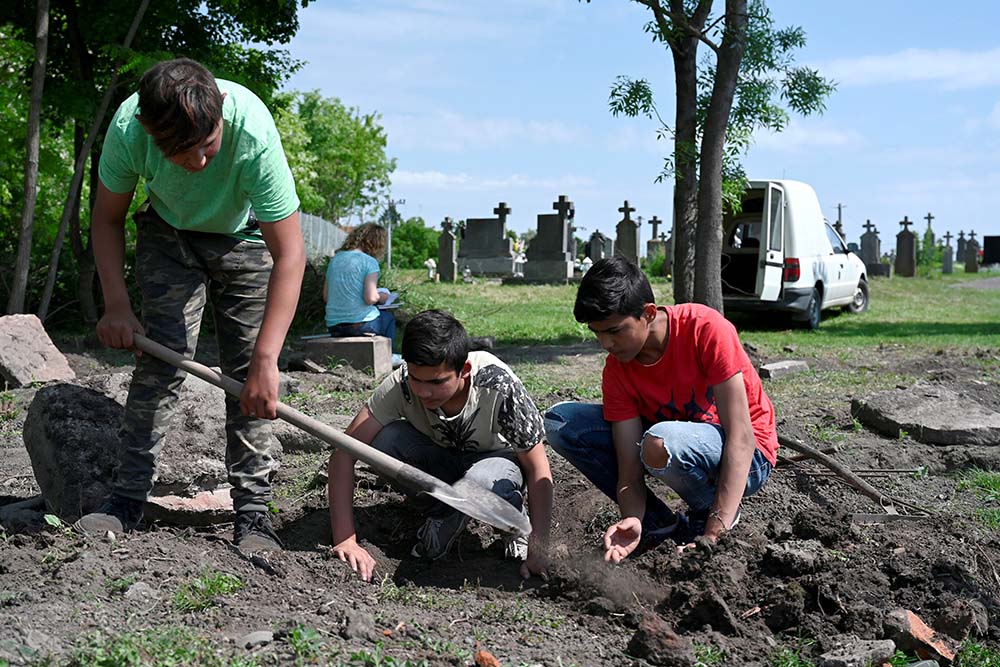 Boys from the Roma community work to restore a forgotten Jewish cemetery in the village of Vinodol, Slovakia, June 5. Pope Francis plans to meet with Jewish leaders in Bratislava Sept. 12. (CNS/Reuters/Radovan Stoklasa)

Murzaku of Seton Hall also noted that the pope choosing to celebrate Mass in the eastern Slovakian city of Presov will send an important message.

"It was in Presov that on April 28, 1950, the Presov Sobor (synod) was held, which sanctioned the official suspension of the Eastern-rite [Greek Catholic] Church," and priests were arrested or forced to convert to Orthodoxy. At the time, Eastern rite churches and property were taken by the Orthodox church and, according to Murzaku, 50-60% of Eastern rite Catholics were converted to Orthodoxy.

Murzaku believes that Francis wants to send a message in a place that has a particularly painful history for the people of Slovakia: that faith is not something to be gained by forced conversions or proselytizing, but through lived witness.

On the peripheries in Lunik IX

Such a witness to the faith will likely be on full display when, on the afternoon of Sept. 14 in the city of Kosice, Slovakia's second largest city, Francis will meet with the Roma community.

There in the Lunik IX district of Kosice, lives a Roma population of 4,300, who are largely segregated and shunned by the rest of Slovakian society, as a result of what writer Aidan McGarry describes as "Romaphobia."

In describing the conditions of the Lunik IX district, McGarry noted in his book Romaphobia: The Last Acceptable Form of Racism that most residents lack heating, water and electricity and that the place is "an unrecognizable ghetto with no way out for those who live there, trapped by poverty and prejudice." 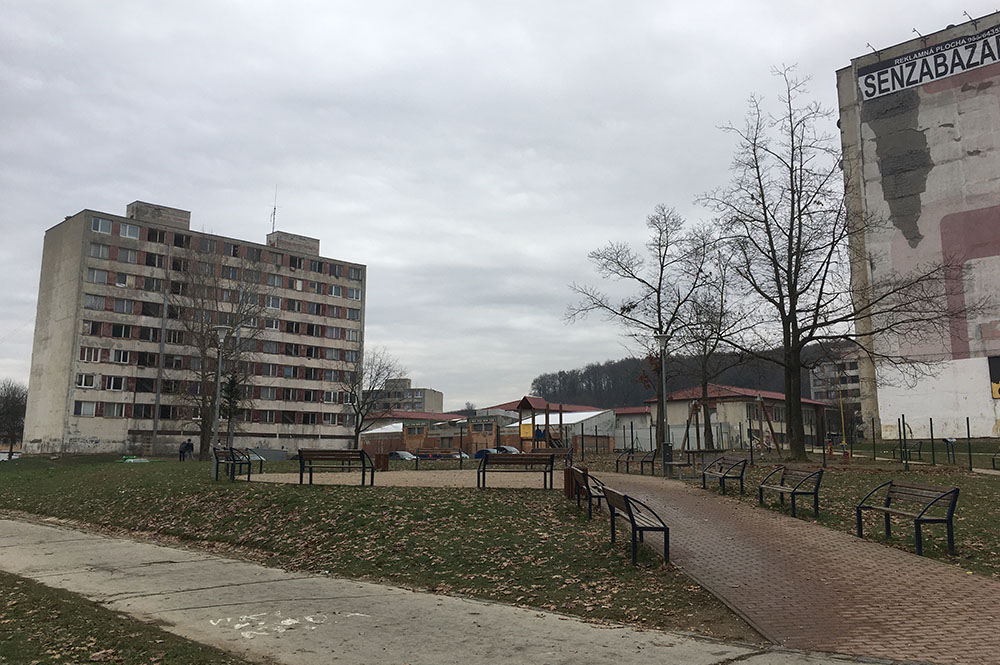 A view of the Lunik IX district of Kosice, Slovakia, where Pope Francis is scheduled to meet with members of the Roma community Sept. 14 (Wikimedia Commons/Adehertogh)

Among their only allies, seeking to improve both their material and spiritual lives, are a group of Salesian of Don Bosco priests led by Fr. Peter Besenyei, who has lived among the Roma community for more than 30 years.

For the last 15 years, Besenyei has lived in Lunik IX where the Salesian community has built a church, a house for the religious community and a pastoral center.

Salesian Fr. Marian Peciar told NCR that Francis' visit is an appreciation of the pioneering work of Besenyei and the other founding priests of the community, whose early work was not supported by their religious superiors.

Peciar said that many Slovaks are ashamed that the eyes of the world will be on Lunik IX, but he says that Francis is spotlighting exactly what it needs to see.

"Pope Francis is showing to all of us what it means to live seriously the Gospel," he said. "His sensitivity to poor, ignored people from the peripheries is amazing."

Such a presence, he added, has not been lost on the Roma who see the pope's visit as a "big gift."

"Some of them want to invite the pope to take lunch or a cup of coffee, or some men, they want to offer him a beer," he joked. 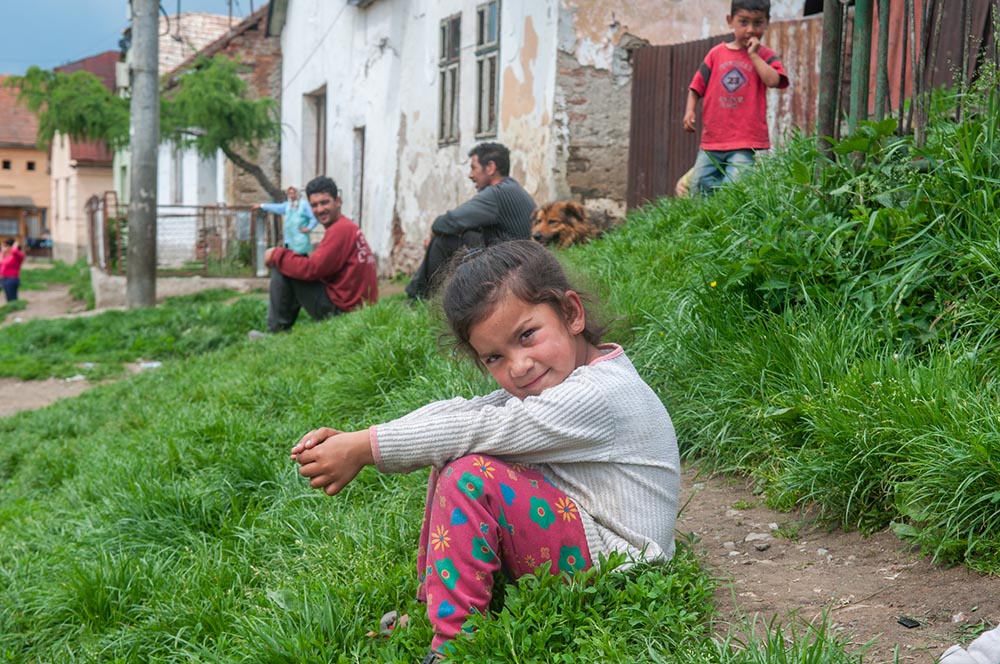 A Roma community in Lomnicka village, in the Presov region of Slovakia. On Sept. 14, Pope Francis will meet with representatives of the Roma, one of the country's greatest marginalized communities, in the city of Kosice. (Dreamstime/Gonzalobell)

When Francis arrives in Lunik IX, it will not mark his first visit to a Roma community. As pope, he has met with Roma communities several times in Rome, and during his 2019 visit to Romania, he met with Roma representatives and asked for forgiveness for the church's sins of discrimination against them.

"We are not Christians, and not even good human beings, unless we are able to see the person before his or her actions, before our own judgments and prejudices," the pope said at the time.

In the lead-up to the pope's upcoming trip, retired Slovakian Cardinal Jozef Tomko candidly admitted that the reasons Francis agreed to visit the small country of Slovakia remain a "bit of a mystery" — an assessment shared by a number of church observers and Slovaks alike, who are just grateful the pope has chosen to spend a few days in their country.

But Peciar believes the reasons are uncomplicated.

"I suppose that we will hear many sentences about God's love for everyone," said Peciar. "It is a big grace combined with the talent of Pope Francis, to speak very simply to all."

One of those straightforward words and messages he believes will be "hope."

"We all need it," he added. "Roma and Slovak too. Hope that we can live joyfully together like beloved brothers and sisters and not simply like neighbors."

This story appears in the Pope Francis in Hungary and Slovakia feature series. View the full series.
A version of this story appeared in the Sept 17-30, 2021 print issue under the headline: Papal trip to highlight ecumenism, dialogue. 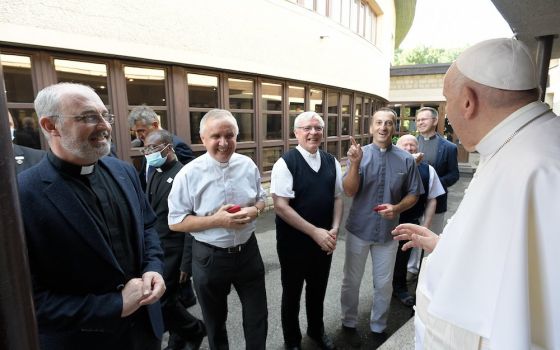 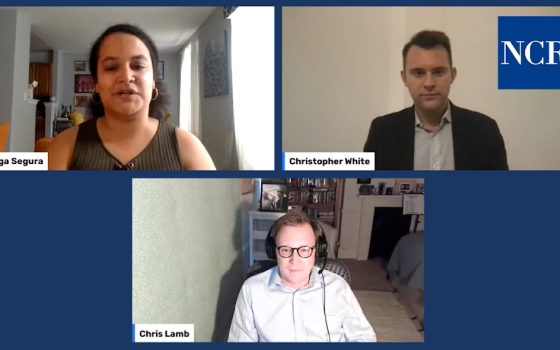 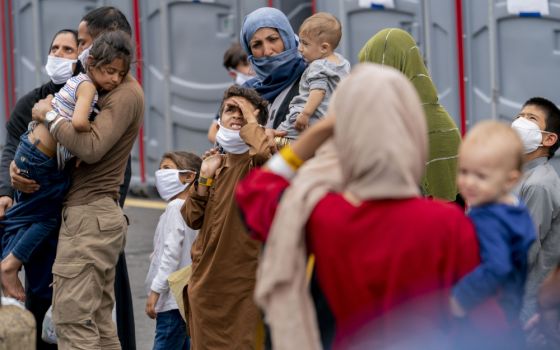 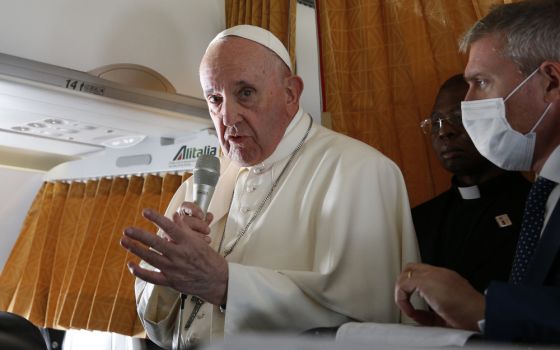