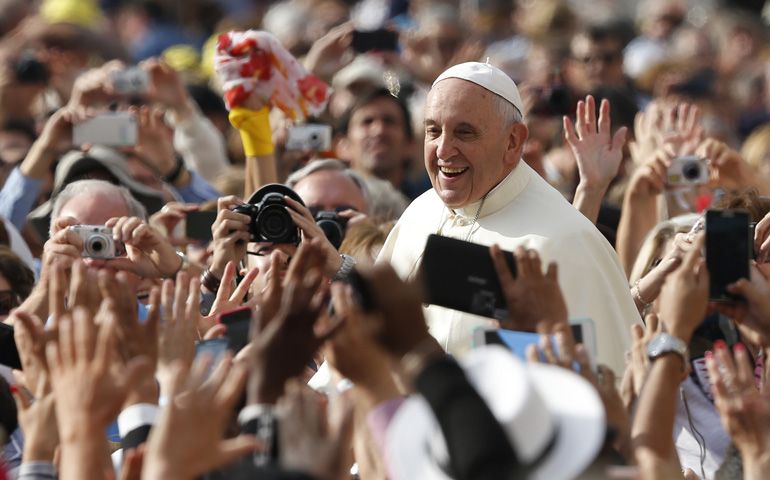 Pope Francis greets the crowd as he arrives to lead his general audience in St. Peter's Square at the Vatican Oct. 1. (CNS/Paul Haring)
This article appears in the Synod on the Family feature series. View the full series.

Rome — An unmistakable air of expectation mixed with uncertainty pervaded the atmosphere here as Pope Francis prepared to open in early October his global meeting of Catholic bishops to discuss issues of contemporary family life.

As of now, nearly every aspect of how the event will unfold is unclear -- from how delicate questions like divorce and remarriage will be handled, to how much discussion will be allowed, to even if it will be known who is speaking each day inside the closed-door Oct. 5-19 Synod of Bishops.

But the one prelate who is chiefly responsible for shepherding the process said Wednesday that at least one thing is clear: The coming days would see an "opportunity to deal with existential issues," both for individual families and for the Catholic church at large.

The theme is "the pastoral challenges of the family in the context of evangelization," and synod members will be called upon to find ways to improve the pastoral application of church teachings, ways to explain it, and ways to help Catholics live it.

During their discussions, the bishops are going to attempt "to respond to the new challenges of the family, starting from the family as the main cell of society and the domestic church for Christians," said Cardinal Lorenzo Baldisseri.

Baldisseri, the secretary general of the Vatican's office for the synod, spoke Wednesday at an event at LUMSA University, a private university in Rome located just east of the Vatican.

The event, one of many hosted in early October by diverse interest groups hoping to have impact on the synod discussions, focused on presenting viewpoints of accomplished women of faith from around the globe regarding struggles stemming from changes in family life.

But it will likely be largely unknown what impact, if any, those groups -- or even the petitions of Catholics around the world -- will have on the bishops gathered in synod. The Vatican press office announced Monday that no texts from the synod discussions would be released. And unlike in previous synods, no printed summaries of the daily discussions are to be issued, either.

Instead, the press office will host daily briefings with Vatican spokesman Jesuit Fr. Federico Lombardi, who will be present during the synod meetings and is expected to brief reporters in Italian on general themes discussed each day. He is to be assisted in those briefings by three priests and one woman who will summarize the events from inside the synod room* in English, Spanish, French and German.

In a short interview following the event Wednesday, Baldisseri said one of the reasons for the decision not to publish the texts was that it would be too difficult for the synod office to prepare five or six translations of each day's expected 30 to 40 interventions by bishops speaking in diverse languages.

Another reason, Baldisseri said, is that the synod office wants to give the bishops an opportunity to speak openly without fear that their discussions will be seen or heard by all.

The office, he said, wants to provide "liberty without [making] suspects" of any of the bishops.

The synod, called by Francis last year, is one of two global meetings called by the pope for 2014 and 2015. The first synod, known as an extraordinary synod, is to involve about 250 people, mainly the bishop presidents of the world's bishops' conferences. Next year's synod is expected to involve wider participation, mainly from several elected bishop representatives of each conference.

Baldisseri's reticence to subject the bishops to public scrutiny during the first synod may be in part due to the unusual level of disagreement already voiced among the church's prelates about the issues expected to be discussed, especially regarding the church's ban on giving Communion to divorced and remarried Catholics who do not have annulments of their first unions.

In one example, U.S. Cardinal Raymond Burke, who is attending the synod in his role as the prefect of the Apostolic Signatura, the Vatican's highest court, was direct in his criticism of German Cardinal Walter Kasper on a conference call with press Tuesday.

Responding to Kasper's proposals for changes in the church practice for the divorced and remarried, Burke said the German prelate's approach was "fundamentally flawed."

Asked how he might attempt to work during the synod with Kasper, whom Francis previously invited to address the world's cardinals in a Vatican meeting in February, Burke responded: "That could be difficult to the degree that Cardinal Kasper is standing by the position that he took."

Yet Baldisseri said Wednesday that he expects the bishops during the synod discussions to act collegially and with respect. Asked if there might be a heated atmosphere inside the synod, the cardinal responded: "Only outside."

"There is one synod going on outside but another will be inside," he said, referring to a difference between news reports globally about what subjects the bishops might discuss and how they will actually have their discussions.

Baldisseri equated that atmosphere to those found at meetings of the Latin American Episcopal Council in 1992 and in 2007, which he attended as the apostolic nuncio to Haiti and Brazil, respectively.

For his part, Francis has not spoken at length for months about the synod or his hopes for its discussions. While saluting the pilgrims at the weekly papal audience Wednesday, he only mentioned the event in passing, when he said, "At the start of this month, dedicated to the meditation of the life of Mary and her son in the mystery of the Rosary, I invite you to pray according to the intentions of the church, overall for the Synod of Bishops dedicated to the family."

And with a small smile, the pope, who may have to intervene to direct the conversations of the synod should the bishops have trouble coming to agreement, added: "Pray also for me."

Yet, prayers or not, the uncertainty of how the synod will unfold and what might result pervades.

Basilian Fr. Thomas Rosica, a Canadian priest assisting the Vatican press office during the synod, mentioned in a conversation that when he arrived Monday in Rome, one of the first things he did was concelebrate Mass in St. Peter's Basilica with a group of other priests.

His first greeting from one of his Italian confreres was a straightforward question.

Asked the priest: "Are they going to do anything about Communion for the divorced and remarried?"

A turbulent year that strengthened the papacy

Report: Pope considering global peace as topic of next Synod of Bishops