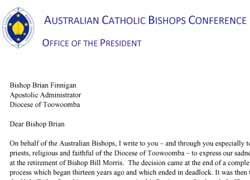 The head of the Australian Catholic Bishops Conference expressed "our sadness" at the retirement of Bishop William Morris of the Diocese of Toowoomba and said the bishops will continue discussion of the event during their ad limina visits in Rome later this year.

Morris was forced to retire after failing to reach agreement with the Vatican over several issues, including use of general confession and absolution and suggesting that the church should discuss alternatives, including ordination of women, to an all-male celibate clergy that is in serious decline.

The bishops conference statement was delivered in the form of a letter dated May 12 from Archbishop Philip Wilson to Bishop Brian Finnigan, who has been appointed apostolic administrator in Morris's absence. Wilson said that the Australian bishops spent "much of our time" during a recent meeting discussing the recent events among themselves and with 40 leaders of religious congregations, many of whom have members working in the Diocese of Toowoomba.

While Morris has received strong support from the National Council of Priests in Australia and from most of the priests in his diocese, the statement of the bishops' conference was measured, reflecting on their responsibilities as bishops and upon "the unique role of the pope as head of the College of Bishops." The letter acknowledges "Pope Benedict's faithfulness to the Petrine ministry, even when it involves very difficult decisions."

According to Wilson, the forced retirement May 2 came following a complex 13-year process that "ended in deadlock."

He said discussion of the process that concluded with Morris's forced retirement "will continue during our ad limina visit to Rome later this year. There we will have the opportunity to share with the Holy Father and members of the Roman Curia the fruits of our discussion and to share our questions and concerns with an eye to the future."

A summary of Morris's dispute with congregations in Rome and a reflection on the recent events, put together by priests in Toowoomba, claims that the bishop's trouble with Rome began shortly after he was installed as bishop in 1993 on the heels of several changes in the style of leadership from the previous bishop.

The priests describe him as encouraging dialogue and collaboration with such measures as creation of a personnel board that consulted with people of the parishes prior to recommending a priest as pastor; establishment of a diocesan liturgical commission to educate priests and people; establishment of guidelines for the use of general absolution and communal rites of reconciliation. Morris conducted diocesan assemblies "designed to invigorate the pastoral life of the diocese and review and refine a diocesan pastoral plan." The bishop also wore a tie bearing his coat of arms rather than the Roman collar, and he offered priests the option of wearing a similar tie as clerical dress, in addition to traditional clerical garb. The choice was left to individual priests.

"The bishop's relaxed and open style was welcomed by most of the diocese. However, there was a small but vocal minority who found fault with nearly every action he took and decision he made," the priests wrote, and the group began sending letters to Vatican congregations.

The priests describe a growing tension between Morris and the Vatican congregations that resulted in the 2007 visitation by Denver Archbishop Charles Chaput, who produced a written report for the Vatican that Morris has not yet seen.

During an interview on the Australian Broadcasting Corp. May 8, Morris said the communal rite of confession with general absolution was the first element over which he engaged discussion with Rome. He said he did a survey of people in his large diocese, a vast, sparsely populated rural area larger than the size of Germany, according to Morris, and found that a consistent wish of the people was for communal penance services. He said he took up the cause "because I really believe the people need a voice. If the spirit of the church and the faith of the church is going to be heard, then it's the voice of the people with the hierarchy and so forth, it's one voice. If the bishop in the local community doesn't give voice to the people's concerns … well then they certainly haven't got a voice."

He said during discussions with Vatican officials in Rome he was accused of giving the people a vote over matters. He said he was unable to change the conversation to "I was listening to people's voices. I was listening to their hearts and so on, and I wasn't giving them a vote. I was asking them so that I could hear them. But somehow or other the conversation always came back to I gave them a vote."

Morris, when asked if he had a message for the wider church, responded: "The church is the people, and the Second Vatican Council made that very clear. They have a voice and a heart, and it's terribly important for them to keep that voice going and to demand of their bishops, through their parish councils, through diocesan pastoral councils, through all the mechanism" that exists, and that bishops "allow their voice to be heard in the church and the world, so that the Spirit speaks through the total church and not presumably just through a few."

Pope offers his solidarity in letter to cartel-afflicted Mexican diocese